The pandemic has already influenced human behaviour in several ways, but is it starting to affect the behaviour of brand owners too? Two recent news stories are worth discussing.

Story one: Who's the boss?

A story that's been reported in the British media involves a man from Liverpool called John Charles, who offers an online art course, something that has proved to be very popular in these dull and lonely times (some 27 000 budding Van Goghs apparently). Charles' customers asked if he could produce some merchandise – caps, hoodies and the like – perhaps so that they could feel that they were part of something, so he did. The merchandise featured the wording "Be Boss Be Kind" and he filed a trade mark application for the term. What could go wrong? 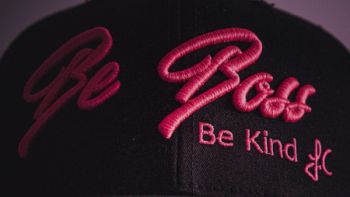 Yet, something did go wrong when the company Hugo Boss AG stepped in. "Boss is our trade mark" said the unwelcome letter, "you can't use it, you must stop doing so immediately, if not sooner".

"I don't understand" replied Charles, "I'm not using anyone's trade mark, I'm simply telling people to be nice to one another".

"What the blazes are you talking about?" came the reply from Germany, "don't you even understand your own language?"

To cut a long story short, Charles finally got his message across . In Liverpool, the word "boss" means great, cool, awesome... seemingly anything but a person who has authority over another person. A compromise was reached. In good old legal-speak, Hugo Boss announced that it had "reached an amicable solution with Mr Charles that does justice to both sides."

Charles' reaction was decidedly less corporate: "I'm buzzing, it's just boss. The key thing is that we're able to continue our free art classes and release our merchandise." There was no stopping him: "Hugo Boss were really sound. Very friendly... by the end of the call we had them all laughing and one of their reps said she will get her kid to join our live online art courses."

Another story that made the headlines in the UK recently was the decision of the UK arm of Burger King to engage in some highly unusual advertising incorporating the names of direct competitors. The advertising campaign was clearly motivated by the pandemic and the fact that fast food – like so many other sectors – has taken a hit. The advertising contained a number of elements: 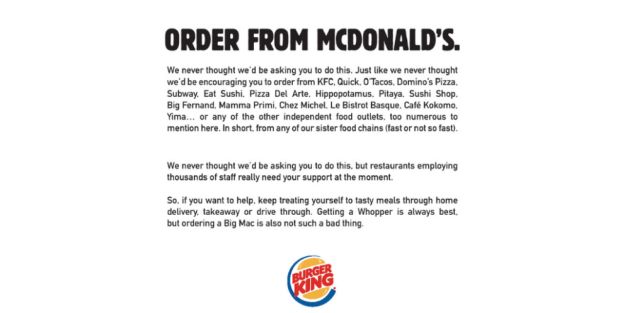 So, what is going on here? Are brand owners becoming nice and cuddly all of a sudden? If so, is this linked to what's happening in the world?

Given the lack of detail of the settlement in the Hugo Boss matter, a cynic might well conclude that the company simply did what it had to do to make an irritation go away. It would no doubt have been desperately keen to avoid any bad PR, especially so soon after that wonderful story involving the comic.

You don't know that one? Comedian Joe Lycett legally changed his name to Hugo Boss, seemingly to protest about the fact that Hugo Boss was sending cease and desist letters to various people who were using trade marks that were similar to Hugo Boss. Lycett's reasoning was that once he'd changed his name he would be able to use the name Hugo Boss with impunity because the law says that bona fide use of your own name is a defence to a trade mark infringement claim. But whether the use is still bona fide where you've deliberately changed your name to the name of the brand is debatable.

So, what are we to make of all of this? Perhaps it's a bit of a stretch to conclude that Hugo Boss has become all warm and fuzzy, but the Burger King advert is quite remarkable. The idea of a brand owner listing competitors' brand names in anything other than a comparative advert – effectively advertising on behalf of an entire sector – would have been unimaginable until recently.

So, are brand owners becoming all caring and collegiate? Will we see things like this when these difficult times are over? It would be nice to think so.