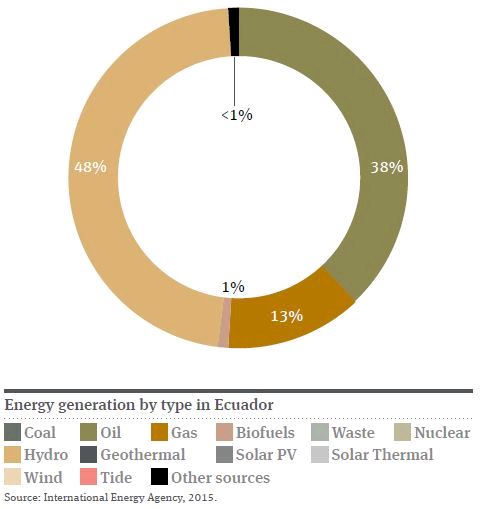 Ecuador's Constitution of 2008 explicitly states that the government will promote the use of clean and alternative energy sources. This commitment sits alongside other pledges to promote energy efficiency, provide access to public services, preserve the environment and maintain food and water security, among others. In August 2015, the Ecuadorian government announced a US$7 billion program for the country's energy transformation. Government officials stated that by the end of 2015, 93 per cent of the country's electricity will be sourced from hydropower. The country is also investing in other forms of renewable energy, such as wind power through the 16.5MW wind farm in Villonaco and in solar energy projects in the Galapagos Islands.

The National Plan for Good Living 2013–2022 (PNBV-SENPLADES 2013-2017) sets a target of reaching 60 per cent of national capacity from renewable energy sources by 2017. Objective 11.1 of this National Plan lays special emphasis on hydropower and bioenergy. The Electrification Master Plan 2013–2022, approved by Resolution CONELEC 041/13, puts forward plans for 25 hydropower projects totalling 4.2GW of new capacity by 2022, as well as an additional 217MW of solar, wind and other non-conventional renewables. Previously, the National Plan for Good Living 2009–2013 had set out a target of six per cent of installed capacity being sourced from renewable energy (other than large hydro) by 2013.

The regulatory framework for electricity is the Electric Law of 2015, which explicitly states an objective of promoting renewable energy sources, including solid-waste biomass. This law establishes that the Ministry of Electricity and Renewable Energy (Ministerio de Electricidad y Energía Renovable – MEER) is the governmental entity in charge of the regulation and planning of the entire power sector of the country, and hence carries the responsibility of promoting renewable energy. The law sets out preferential regulations for renewable energy, which are still under development by the newly created electricity agency (ARCONEL) and are expected to be issued in the second half of 2015. Previously, the Electric Law of 1996 mandated the now disbanded National Electric Council (CONELEC) to promote renewable energy through special dispatch regulations.

Small-scale generators smaller than 1MW do not require a permit for operation (Decree 1581 of 1999). However, in order to benefit from the feed-in tariffs, they needed to be registered with the CONELEC. The procedures for registration of small projects were established in 2008 by Regulation CONELEC 009/08. In 2013, Regulation CONELEC 002/13 superseded the 2008 regulation, and introduced two payments: a registration guarantee of US$7,000 for projects smaller than 500kW and US$15,000 for projects larger than 500kW; and an execution guarantee of one per cent of the total project cost.

When a project developer builds a transmission line to connect a renewable energy project to the grid, it can obtain compensations for its expenditure, the levels of which were established by the feed-in tariff regulations of 2002, 2004 and 2006 as an additional US$0.06 cents/kWh/Km, with a maximum cost of US$1.5 cents/kWh/Km. Since 2013 (Regulation CONELEC 001/13), connection to the grid requires the payment of a non-refundable fee (US$10,000 for projects larger than 1MW and US$5,000 for projects smaller than 1MW) to the transmission or distribution company for a connection feasibility study. Payment of the fee does not guarantee connection. Once a project is cleared for connection, a guarantee of 0.5 per cent of total investment is required, refundable when the project begins operation on the agreed timelines.

Fiscal incentives were provided by the Electric Law of 1996, which provided import duty exemptions for solar, wind, geothermal and biomass equipment, as well as a five year income tax exemption for renewable energy developers. The 2015 Electric Law does not contain similar fiscal provisions. Since 2011 (CONELEC 004/11) renewable energy projects receiving the feed-in tariff must contribute an amount (per kWh generated) to social and community development projects (Estado del Buen Vivir). As of 2014 (CONELEC 014/14) the amount is as shown in the below table.

Subsidies for electricity and fuel are a major barriers to the promotion of energy efficiency programs and renewable energy use in the manufacturing, service, and residential sectors. Although subsidies and the total absorption of investments by the state may constitute a risk to the financial sustainability of long-term projects (due to the pressure exerted by these measures on the national economy), this risk can be mitigated with the appropriate security and investment protection measures. However, there may be other institutional barriers. There remains, for instance, the problem of coordinating efforts between various government and private institutions to reach all end users of energy.

Renewable energy sources are expected to play a growing part in meeting future energy demands, and with the right government support will ideally one day end Ecuador's dependence on imported fossil fuels.