On April 19, 2022, the Taiwan IP Office (TIPO) submitted to the Executive Yuan (Taiwan's highest executive branch of the Government) the draft Patent Law Amendment which has undergone several rounds of public hearings in the past 12 months. Unlike the recently passed amendment pertaining to just the patent linkage system, this new Amendment, if passed as proposed, will bring about an overhaul change to the entire patent regime, especially with respect of prosecution and invalidation.

The key points in the Amendment are as follows:

1. Establishment of a Patent Trial and Appeal Board (PTAB)

At the organizational level, the most significant change introduced by the Amendment is the proposed establishment of a Patent Trial and Appeal Board (PTAB) within the TIPO. Officially named "The Patent Committee for Review and Dispute Resolution," this new agency will review/examine the following types of cases:

The PTAB will be composed of senior patent examiners and legal experts, and will form a panel consisting three or five members to hear each case, one of the members acting as the presiding panelist. If the case relates to an appeal of the TIPO's rejection of a procedural request of simple nature, it will be reviewed by a single-member panel.

For the present, Taiwan adopts a two-stage examination system in terms of patent prosecution: (i) preliminary examination by one Examiner; and (ii) re-examination by a second Examiner. Afterward, a three stage appeal process is available, starting from a review by the Petitions & Appeals Committee within the Ministry of Economic Affairs, whose rulings can be appealed to the IP & Commercial Court (IPC Court), and then to the Supreme Administrative Court. The same three-stage appeal process applies to invalidation actions. At the TIPO level, an invalidation action is reviewed by one single examiner under a partially adversary system, although the proceeding is always inter partes, and no re-examination within the TIPO is available.

Now, it is proposed to remove the Petitions & Appeals Committee from the appeal system and replace it with the PTAB, hence delayering the levels of appeals, as the following flowchart shows. Furthermore, the  PTAB  will replace the existing re-examination mechanism within the TIPO, and will become the first tribunal to hear an invalidation action. 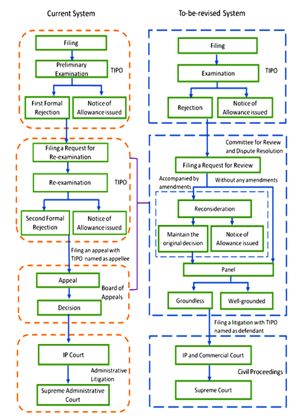 To strengthen its legitimacy of replacing the present Petitions & Appeals Committee in invalidation actions, the PTAB will examine invalidation actions on the basis of adversary system, and holding oral hearings will be the default rule. When a party appeals the PTAB's decision to the IPC Court, it will be the opposite party rather than TIPO to be named as the defendant.

While the court system for judicial review remains to be a two-instance system, the litigation will shift from administrative to civil proceedings, and the court of final appeal on patent disputes will be the Supreme Court instead of the Supreme Administrative Court.

Under the current practice, an applicant may file a request for dividing an invention patent application into two or more applications:

According to the draft Amendment, the time limit for filing a divisional application will be adjusted as follows:

The current grace period of six (6) months after the disclosure of the design in a printed publication or an exhibition and before filing will be extended to twelve (12) months.

Under the current practice, when a patent entitlement dispute arises, an interested party may initiate an invalidation action to cancel the concerned patent. On the other hand, the entitled person may file a new patent application for the same invention within two (2) months from the date the concerned patent is canceled while the new application can take advantage of the filing date of the canceled patent. In lieu of filing an invalidation action, the entitled person may attempt to resolve the issue via the route or obtaining a confirmatory judgment.

To find out the genuine entitlement of patent rights mostly involve private rights, contractual disputes, etc. Therefore, the Government now proposes that only the civil court will have the right to adjudicate on an entitlement dispute. A court decision in favor of the entitled person can be based on to conduct a change-of-name recordal with the TIPO. The entitled person will no longer need to file a patent application after the concerned patent is canceled.

Further, upon a showing of a duly filed petition for preliminary injunction, a party in an entitlement dispute may request for a three-month suspension of any TIPO or PTAB proceedings concerning the patent/application as long as continuation of such proceedings may impair the party's interests.