Work emanating from Norway is of significant importance to Conyers' Bermuda corporate practice. Through our extensive and long-standing relationships with Norwegian law firms, corporates and banks we have developed a substantial and growing portfolio of "Norway-sourced" business. Our deal-flow over the past 18 months has been particularly robust. The lifeblood of our Bermuda-Norway practice is shipping-related work and with the biennial 2015 Nor-Shipping conference on the horizon we have prepared this bulletin for our clients and legal colleagues who work with us in the Norwegian offshore shipping and ship finance space. We hope that this publication will be of interest and we look forward to opportunities to enhance our working relationships in the year ahead.

Our Bermuda corporate law practice in the Norwegian market continues to strengthen year-over-year. In 2014, our work with Norwegian promoters was focussed on a variety of shipping industry related deals, as illustrated in the graphic below. 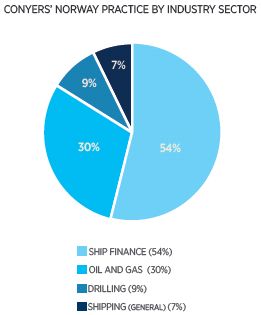 Notable Attributes of Our Work In These Sectors Include:

Conyers' depth of experience in the Norwegian market is evidenced by our recent work on a number of high-profile transactions. Below we have highlighted some of the more significant shipping capital markets and ship finance transactions that we advised on in the past 12 months.

Conyers advised Avance Gas Holding Ltd ("Avance") alongside Thommessen AS on the Bermuda law aspects of its initial public offering ("IPO") and listing on the Oslo Børs in April 2014. Avance offered US$100 million of new shares and existing selling shareholders sold a combined US$150 million of their shares in the IPO. The IPO was the culmination of Avance's development from its incorporation as a subsidiary of Stolt-Nielsen Limited, transformation into a joint venture company with initially Sungas and latterly Frontline 2012 Ltd., listing on the OTC market of the Oslo Børs in October 2013 and a US$100 million private placement of shares in November 2013. The IPO in conjunction with a new US$200 million loan, which Conyers also acted on, has provided Avance with the necessary funding to pay for its new buildings programme.

We were very pleased to have been selected as issuer's counsel to Avance. We have advised all Bermuda company issuers on the Oslo Børs over the past two years. Companies advised have included BW LPG Limited and Odfjell Drilling Ltd. on their respective IPOs in 2013, as well as Team Tankers International Ltd. on its listing following a successful exchange offer with the shareholders of Eitzen Chemical ASA earlier this year. 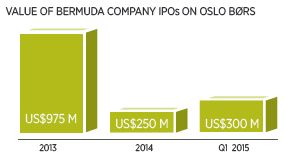 Stolt-Nielsen Limited returned to the capital markets in March 2014 with the issuance of NOK1.25 billion senior unsecured bonds, with Norsk Tillitsmann ASA as bond trustee. Conyers advised the company as to Bermuda law, with Thommessen AS and McLaughlin & Stern LLP acting as Norwegian and US counsel respectively.

In 2014, Conyers advised BW Offshore Limited ("BW Offshore") on the Bermuda law aspects of a number of debt financing arrangements in the capital markets space.

Notably, Conyers acted for BW Offshore alongside Wikborg Rein in connection with a NOK750 million senior unsecured bond issue in March 2014. The proceeds of the bond issue were used for BW Offshore's general corporate purposes. DNB Markets, Nordea Markets, SEB Bank and Swedbank acted as joint lead managers for the Bond Issue. The bonds were listed on the Oslo Børs in June 2014 and will mature in March 2019. The second part of the transaction included a senior secured credit facility, which we review on the following page.

In July 2014, Conyers also advised BW Offshore in connection with a US$800 million 10 year senior secured credit facility entered into between BW Offshore's subsidiary, BW Catcher Limited ("BW Catcher") as borrower and a syndicate of 13 leading international banks including acting as lenders (the "Facility"). BW Catcher's shares were pledged by BW Offshore as part security for the obligations under the Facility. The Facility is a combined construction and long-term financing facility in connection with the BW Catcher Floating Production Storage and Offloading project.

Conyers advised Odfjell Drilling Services Ltd. alongside Wikborg Rein upon the establishment of a US$450 million term loan and revolving credit facility by, inter alia, Danske Bank A/S and DNB Bank ASA. The facility was secured by the granting of security by a number of other Bermuda incorporated Odfjell companies, including Odfjell Drilling Ltd. Our cross-jurisdictional capability was also utilised in this financing as Odfjell Well Services Ltd., a BVI company, was also a conditional provider of security with our BVI office advising on the transaction. Other Scandinavian banks involved in the provision of the facility included Nordea Bank Norge ASA and Swedbank AB.

BERMUDA AND NORWAY - IN GLOBAL CONTEXT

Like Norway, Bermuda has a long established and highly regarded reputation in the international shipping sector.

Due in part to the synergies between both countries, Conyers has been actively involved in fleet registrations, financings and listings by Norwegian shipping companies. More ships owned by Oslo Børs listed companies are flying the Bermuda flag than ever before, with vessel registration in Bermuda having increased dramatically.

On the capital markets front, there are 13 companies listed on the Oslo Børs that are incorporated in Bermuda, and we have advised as issuer's counsel on more of these listings than any other Bermuda law firm.

Change is inevitable in the offshore shipping industry and we expect this to be most evident in the evolution of the offshore drilling sector. While the bulk of our work over the past year has focused on capital markets and financings, we expect to see this shift toward refinancing and restructuring as consolidation is expected, and as a result of older drilling units being taken out of operation for replacement by newer, more advanced fleets. Within this new environment, we look forward to continued collaboration with our Norwegian partners.