Worldwide: Cost Of An Indian Patent Compared To IP5 Patents

by Sharad Vadehra , Kanu Priya and Aakriti Vadehra
Kan & Krishme
Your LinkedIn Connections
with the authors

When faced with a choice to apply for a patent, one of the many initial doubts that arise in an applicant's mind is the cost thereof. Obtaining a patent is not cheap; the cost of filing, examination, translations, and if granted, maintenance can often be a deterrent for many applicants, especially SMEs.

As an instance, the average official fee of e-filing an application (with 30 pages of specification and 10 claims), examination, and maintaining the same (for 20 years) in the US for a large entity can run as high as 16,480 USD. The same in Japan, Europe, China, and Korea cost approximately 12,128 USD, 31,188 USD, 12,812 USD, and 10,382 USD respectively. Evidently, protecting an invention in one of the IP5 countries comes at a high cost.

Now, consider India. The official fee of e-filing an application (comprising 30 pages of specification and 10 claims) in India, for a large entity, is 103 USD. The examination of the application costs 258 USD. When granted, the maintenance fee of up to 20 years is 4,950 USD. The total average official fee for obtaining and maintaining a patent in India comes out to 5,311 USD. Some quick math would tell you that an Indian patent is 67% cheaper than a US patent, 56% cheaper than a Japanese one, and 83% cheaper than a European one. 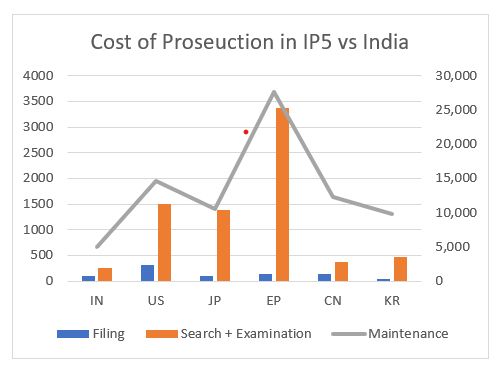 Please note that the above figures do not include translation costs. While India, the US, and Europe accept an English specification, filing in China, Japan, and Korea requires applicants to file their patent applications in the respective national languages. Even in Europe, the allowed claims need to be translated into French and German. Therefore, applicants in India save on translation costs as well.

Recognizing the importance of the SME sector and encouraging more patent filings in India, the Government offers several incentives to MSMEs, natural persons, and educational institutions. In particular, start-ups, small entities, natural persons, and educational institutions are offered discounts on the official fee at every stage, including filing, examination, opposition, and maintenance. For example, the cost of filing an application for a patent accompanied by a complete specification comprising 30 pages and 10 claims is Rs. 8000 (103 USD) for large entities and Rs. 1600 (approx. 20 USD) for start-ups, small entities, natural persons, and educational institutions. Thus, the fee for entities other than large entities is 1/5th of the fee for large entities.

For the purpose of clarity, Rule 2 of the Indian Patents Rules, 2003 (as amended) define who may be referred to as a small entity, a start-up, and an educational institution.

According to Rule 2(fb) of the Indian Patents Rules, 2003 (as amended) read with the Start-up India Initiative Scheme of the Government of India,

Further according to Rule 2(ca) of the Indian Patents Rules, 2003 (as amended), an educational institution means a university established or incorporated by or under Central Act, Provincial Act, or State Act and includes any other educational institution as recognized by an authority designated by the Central Government or the State Government or the Union territories in this regard.

Naturally, the above categories of entities need not necessarily be of Indian origin only, but can also be foreign entities. To be eligible, the Applicant must submit the prescribed documents as proof along with Form 28.

It is worth mentioning that along with a concession on fee, start-ups and small entities are also eligible to request for expedited examination of their patent applications under Rule 24C of the Indian Patents Rules, 2003 (as amended). Utilizing this provision, Hyderabad-based company, Optimus Drugs, and several other start-ups have been able to obtain inexpensive yet quick patents in a record time of 113-300 days only.

We shall end this article with food for thought – the professional fee of Indian Patent Agents and Attorneys is significantly lesser than that of foreign patent agents and attorneys.

ARTICLE TAGS
India Intellectual Property Patent
POPULAR ARTICLES ON: Intellectual Property from Worldwide
Intellectual Property Updates From India
IndusLaw
As we reach the third quarter of 2022, we have witnessed no dearth of pathbreaking developments in the field of Intellectual property rights.
Importance Of IP In Metaverse
Photon legal
As more and more companies move into the super-hyped space of metaverse, the importance of Intellectual Property (IP) becomes more and more crucial than ever. IP is what allows companies to...
Process: Trademark Registration In India
Intepat IP Services Pvt Ltd
Many entrepreneurs do not comprehend the importance of a TM search.
Delhi High Court Rules On The Scope Of Amendments Under Section 59
Khaitan & Co LLP
In the matter of NIPPON A&L INC. V. THE CONTROLLER OF PATENTS, the Delhi High Court (the Court) through its Judgment dated 5 July 2022 has passed a decision on the allowability of amendments...
Assignment And Licensing Of Copyright
S&A Law Offices
Copyright is a protection given to the creators of certain types of works as an acknowledgment to their intellectual input
Patent Law in India
Anand & Anand
The Patents Act 1970, along with the Patents Rules 1972, came into force on 20th April 1972, replacing the Indian Patents and Designs Act 1911. The Patents Act was largely based on the recommendations of the Ayyangar Committee Report headed by Justice N. Rajagopala Ayyangar. One of the recommendations was the allowance of only process patents with regard to inventions relating to drugs, medicines, food and chemicals.
FREE News Alerts
Sign Up for our free News Alerts - All the latest articles on your chosen topics condensed into a free bi-weekly email.
Register For News Alerts
Article Tags
India Intellectual Property Patent
Similar Articles
Powered by mondaq AI
MATCH
65%
Official Fee For Patent Applications In India Obhan & Associates
61%
Current Scenario Of Small Entity Status Under The Regime Of Amended Patent Rules, 2014 S&A Law Offices
56%
Trademark Fees In India: Reductions, Claiming Special Status, And Other Fees Obhan & Associates
42%
The Statement Of Working Of Patents In India (Form 27) – A Complete Guide Kan & Krishme
58%
Patent Applicants In India: Special Privileges For Start-ups And Small Entities Obhan & Associates
Related Articles
Divisional Applications And Plurality Of Invention In India Obhan & Associates
Filing A Trademark In India: Putting Together The Application Documents Obhan & Associates
Scope Of Remand In Pre-grant Oppositions Lakshmikumaran & Sridharan Attorneys
Extraordinary Exceptions To Deadlines At The Indian Patent Office Obhan & Associates
Update On Copyright Offences In India Kochhar & Co.
Mondaq Webinars
Litigation Funding in Canada
Nomos Capital Corp.
Private Wealth - Getting it Right: Trusts, Foundations and Funds
Dixcart Group Limited
More Webinars
Comparative Guides
Alternative Investment Funds
Artificial Intelligence
Aviation Finance
Aviation Regulation
Blockchain
More Guides
Mondaq Advice Centres
India
Trademarks
India
Arbitration, Litigation and Conciliation
India
Insolvency
Global
Trademarks in SAARC Countries
More MACs
Curated Content
Do Scientific Publications Exempt Patent Applications From Anticipation?: The Indian Position
Obhan & Associates
Preparing For Invention Disclosure Meetings: A Guide For Inventors
Obhan & Associates
Patenting 3d Bioprinting In India
Obhan & Associates
Under The Skin: Patentability Of Cosmetic Compositions And Treatments In India
Obhan & Associates
The Cords That Bind: Patenting Embryonic Stem Cell Related Inventions In India
Obhan & Associates