by Khurana And Khurana (Uttar Pradesh)
Khurana and Khurana
Your LinkedIn Connections
with the authors
To print this article, all you need is to be registered or login on Mondaq.com.

Recently, ClearOne, a Salt Lake City, US-based global provider of audio and visual communication solutions announced that a jury in the U.S. District Court for the District of Delaware returned a verdict of no infringement by ClearOne's Ceiling Tile Beamforming Mic Array product line on Shure Incorporated's U.S. Design Patent No. D865,723 (the "'723 patent"). The jury also declared the "'723 patent" to be invalid.

ClearOne is a company that designs, develops, and sells conferencing, collaboration, and network streaming solutions for voice and visual communications while Shure Incorporated too is a US-based microphone and audio electronic equipment manufacturer. 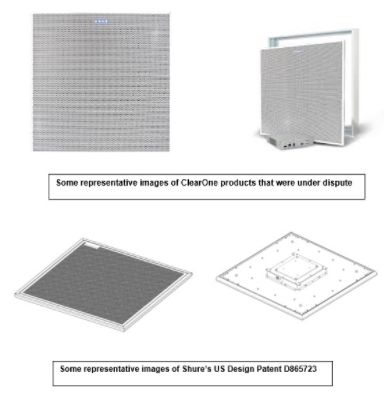 It is well established that only non-functional aspects of the design are considered in the infringement analysis. In this case, it was found that the "square shape of the claimed design" be functional. Therefore, Shure cannot advance infringement arguments based on the square shape of the array microphone assembly. The Magistrate Judge strikes portions of Shure's expert report that reference the outermost square shape. The Magistrate Judge goes on to distinguish the portions of Mr. Hatch's expert report that reference the "outermost square shape" and the other square elements of the design that are not dictated by functionality. This is a tenable distinction. The functional aspect of the square shape is in the ability to replace a standard, square, ceiling tile with the claimed array. The other square elements, including the face of the array, were a design choice and thus entitled to protection. ClearOne also argued is that there are obvious differences on the back panel of the claimed design and the accused products and the court too agreed that the back panel must be considered in the infringement analysis, even if it is concealed for most of the product's lifespan.

ClearOne's existing lawsuit against Shure also alleges that Shure, itself and jointly with others, infringes ClearOne's U.S. Patent No. 9,635,186 ("the '186 Patent"). Although Shure recently added the claim that the '186 Patent was unenforceable, ClearOne rejects this claim and will vigorously defend the '186 Patent and prosecute Shure's infringement.

Khurana And Khurana
Khurana and Khurana

ARTICLE TAGS
India Intellectual Property Patent
POPULAR ARTICLES ON: Intellectual Property from India
Internet And The Determination Of Jurisdiction In The Case Of Trade Mark Infringement
S.S. Rana & Co. Advocates
Internet has marked its presence in the commercial world in an unprecedented way. With businesses moving online to escalate their accessibility to a wider range of customers in the market, ...
Can # Hashtags Be Protected As Intellectual Property In India?
Legacy Law Offices
In an ever-evolving era of digitization and mobile telephony, social media has become a quintessential platform for business development and marketing.
Assignment And Licensing Of Copyright
S&A Law Offices
Copyright is a protection given to the creators of certain types of works as an acknowledgment to their intellectual input
A Study On: Novartis AG v. Union Of India
Khurana and Khurana
Intellectual property is an intangible form of property while a ‘Patent' is a subset of intellectual property.
Patent Infringements And Their Types
S&A Law Offices
Patent is one of the most important forms of Intellectual Property (IP). The term of a patent is typically 20 years from the Priority date of the application.
No Bar On Filing Infringement Suit Against Registered Trademarks And For Passing Off
LexOrbis
Recently, in the matter of Good Life Industries v. J R J Foods Pvt. Ltd. C/AO/10/2021...
FREE News Alerts
Sign Up for our free News Alerts - All the latest articles on your chosen topics condensed into a free bi-weekly email.
Register For News Alerts
Article Tags
India Intellectual Property Patent
Similar Articles
Powered by mondaq AI
MATCH
42%
Patents Comparative Guide Obhan & Associates
55%
TM And Design Patent Conflict Khurana and Khurana
47%
Converse Wins Shoe Design Patent Claim Against Steve Madden Khurana and Khurana
46%
Declaration Of Non-Infringement: Preemptive Or Preventive Measure? LexOrbis
46%
What Are The Differences Between The Protection Of An Invention And An Industrial Design? Khurana and Khurana
Related Articles
From Distinctiveness To Genericide: Avoiding Trademark Ruin Obhan & Associates
Exports Under The Bolar Exception: A Key Arrow In The Indian Generics Quiver Obhan & Associates
It's A Wrap! Intellectual Property Round-Up 2022 G&W Legal
Swiss Military Trademark Case Khurana and Khurana
PhonePe vs DigiPe Khurana and Khurana
Mondaq Webinars
Considering the Nigerian Start-Up Act & The Opportunities for Tech
Oake Legal
A Guide for Business and Investors – The Sleeping Giant; Why is Nigeria the New Emerging Market for Global Business
Threshing Fields Law Practice
More Webinars
Comparative Guides
Alternative Investment Funds
Artificial Intelligence
Aviation Finance
Aviation Regulation
Blockchain
More Guides
Mondaq Advice Centres
India
Trademarks
India
Arbitration, Litigation and Conciliation
India
Insolvency
Global
Trademarks in SAARC Countries
More MACs
Curated Content
Fast Tracking Through The Patent Prosecution Highway In India
Obhan & Associates
Divisional Applications And Plurality Of Invention In India
Obhan & Associates
Do Scientific Publications Exempt Patent Applications From Anticipation?: The Indian Position
Obhan & Associates
Preparing For Invention Disclosure Meetings: A Guide For Inventors
Obhan & Associates
Patenting 3d Bioprinting In India
Obhan & Associates
Upcoming Events
Mondaq Social Media