India: Twin Conditions To Be Satisfied: SC On Claims Of Wages/Salaries

A significant judgement was passed by Hon'ble Supreme Court on 19th April 2022 in matter of Sunil Kumar Jain and others versus Sundaresh Bhatt and others1 wherein Supreme Court has clarified the intricacies that arose on the claim for payment of wages/salaries before Corporate Insolvency Resolution Process (CIRP); during CIRP and in liquidation of a Corporate Debtor.

The National Company Law Appellate Tribunal dismissed an appeal preferred by the workmen/employees of M/s ABG Shipyard Limited ('Corporate Debtor') against National Company Law Tribunal's order denying relief to them with regard to their claim relating to salary for the period involving 'Corporate Insolvency Resolution process' (CIRP) and the period prior thereto. Aggrieved by the said order, workmen/employees preferred appeal before the Hon'ble Supreme Court.

The appellants i.e., workmen/ employees contended that the salaries/wages and the dues payable to them during the CIRP period will be qualified as CIRP costs under Section 5(13) of the Insolvency and Bankruptcy Code, 2016 (IBC) and are liable to be disbursed even prior to the amount distributed under Section 53 of the IBC. It was further submitted that the provident fund, gratuity and pension fund amounts remain outside the liquidation under Section 36(4) of the IBC.

On the other hand, the respondent contended that the wages and salaries claimed by the appellants who have done no work during the CIRP period and have not assisted the Resolution Professional (RP) /Liquidator during the CIRP, would not fall within the parameters of CIRP costs within the definition of Section 5(13)(c) of the IBC.

Wage/salaries of only those workmen/employees who actually worked during the CIRP are to be included in the CIRP costs:

The Hon'ble Supreme Court, referred to the following provisions of the IBC: 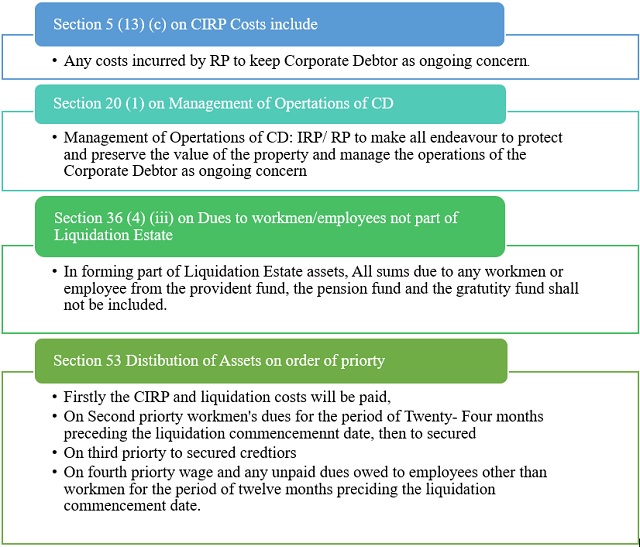 and observed that while considering the claims of the concerned workmen/employees towards the wages/salaries payable during CIRP, first of all it has to be established and proved that during CIRP, the Corporate Debtor was a going concern and that the concerned workmen/employees actually worked while the Corporate Debtor was a going concern during the CIRP. Therefore, two step formula have been evolved. An exclusion has also been evolved wherein the wages and salaries of all other workmen/employees of the Corporate Debtor during the CIRP who actually have not worked and/or performed their duties when the Corporate Debtor was a going concern, shall not be included automatically in the CIRP costs. Further, the wages and salaries which are included in the CIRP costs will have first priority in terms of Section 53 (1) (a) of IBC and all other wages/ salaries which are not included in CIRP cost shall have to be governed by Section 53(1)(b) and Section 53(1)(c) of the IBC.

It depends on the facts of each case.

On the issue of provident fund, gratuity fund and pension fund, the Hon'ble Supreme Court noted that Section 36(4)(iii) of the IBC specifically excludes "all sums due to any workman or employee from the provident fund, the pension fund and the gratuity fund", from the ambit of "liquidation estate assets" and therefore liquidator shall not have any claim over such funds.

In the five years from its enactment of IBC, the Hon'ble Supreme Court has adjudicated upon various matters under the IBC and provided certainty on interpretation of key concepts under it. These developments have enriched the jurisprudence of insolvency in the country.  The current judgement propounded by Hon'ble Supreme Court clarifies the position of workman/employees and sets the law clear regarding claims towards wages and salaries for the period during CIRP can only be included in the CIRP costs if it is established that the IRP/Resolution Professional managed the operations of the Corporate Debtor as a Going Concern during the CIRP and that the concerned workmen/employees actually worked during the CIRP and not otherwise. 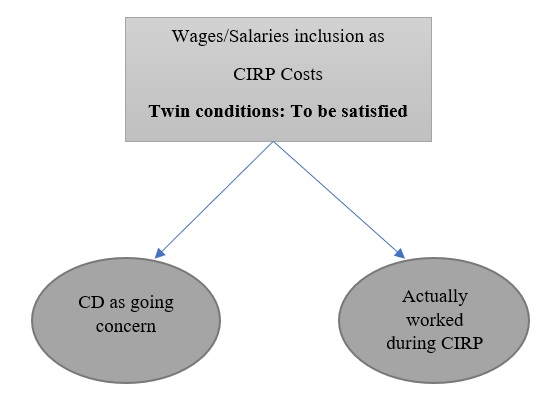