India: Strengthening Of The Arbitration Institution In The Post-Amendment 2019 Era

by Niyati Kanojia and Anand Pratap Singh
Singh & Associates
0 Liked this Article
To print this article, all you need is to be registered or login on Mondaq.com.

The principle behind arbitration proceeding is to provide parties an opportunity to resolve a dispute mutually, especially in commercial sector, without going through arduous judicial proceedings thereby saving time and money, and enhancing efficiency, with minimal interference of courts. In India, where ad hoc arbitration is much more in practice than institutional arbitration, parties, counsels and arbitrators have begun to recognize ad hoc arbitration as a completely scrutiny free procedure causing delay in resolving dispute, ultimately defeating the entire purpose of arbitration. Considering this scenario and worldwide approach towards arbitration proceeding, India legislature has taken measures to develop arbitration institutions by amending the present act. 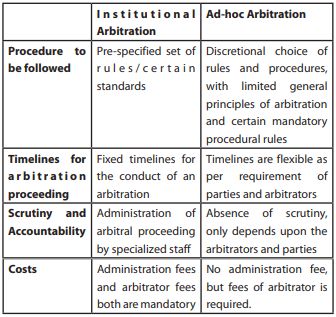 "There are over 35 arbitral institutions in India. These include, domestic and international arbitral institutions, arbitration facilities provided by various public-sector undertakings, trade and merchant associations, and city-specific chambers of commerce and industry."1

The Committee identified six points to improve the performance of Indian arbitral institutions:

Accordingly, on the basis of the above recommendations and to become international hub for arbitration, an amendment was made in the Arbitration Act in 2019 which inserted new sections 43A to 43M in the Arbitration and Conciliation Act, 1996, which established Arbitration Council of India (ACI).

Sub-section (1) of section 43D provides that it is the duty of the Council to take all measures necessary to promote and encourage arbitration, mediation conciliation or other alternate dispute resolution mechanisms, and for that purpose to frame policy and guidelines for the establishment, operation and maintenance of uniform professional standard in respect of all matters relating to arbitration.

Section 43I provides that the Council shall make grading of arbitral institution on the basis of criteria relating to infrastructure, quality and caliber of arbitrators, performance and compliance of time limit for disposal of domestic and international commercial arbitration.

Section 43J provides that qualification, experience and norms and accreditation of arbitrators shall be governed by the Schedule Eight.

Now the parties in the absence of a procedure to appoint an arbitrator or failure of such procedure under the agreement, can approach arbitral institution designated by the Supreme Court or the High Court for the appointment of Arbitrator.

Further, Section 42A of the Amendment Act, 2019, lays down the conditions of confidentiality to be extended to the arbitrator, the arbitral institution, and the parties to the arbitration agreement in all matters of arbitration proceedings, save for wherever disclosure may be necessary.

The provision of Section 42A of Arbitration Act is a welcome change. Confidentiality of arbitration proceedings is a hallmark of international arbitration tribunals and is enshrined in the rules of almost all such international tribunals, forming one of the fundamental reasons why they remain the preferred destinations of parties and arbitrators alike.

India, with its latest Arbitration and Conciliation (Amendment) Act, 2019, seeks to tackle the problem of a lack of specialized arbitrators, but the problem extends further. In India, it has been noted that arbitration is inextricably tied with court litigation, a relation which might hint at the lack of specialisation and subsequently, a considerably limited number of arbitrators. Again, the establishment of the ACI as proposed in the Amendment Act, 2019, should prove a handy tool in overcoming this hurdle.

However, the amendment lacks any specific procedure or standard that the courts have to meet in order to designate such arbitration institutions, and only provides general conditions for such appointment, and in time, need may arise for further amendments.