by Shubham Borkar and Anjali Jain
Khurana and Khurana
0 Liked this Article
To print this article, all you need is to be registered or login on Mondaq.com.

The Hon'ble Delhi High Court has recently held that there is no deceptive similarity between the marks "Officer's Choice" and "Fauji" and has rejected Allied Blenders and Distillers Pvt Ltd's trademark infringement suit for its mark 'Officer's Choice' against the owner of another alcoholic beverage, 'Fauji'. An Image depicting the marks is reproduced here for the sake of convenience. 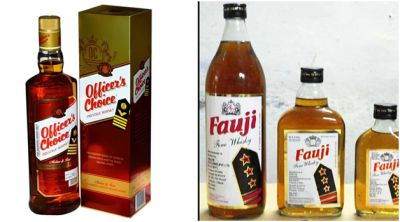 "Fauji" is a commonly used Hindi language phrase which means a "Military Officer". Furthermore that the plaintiff and defendants are in the same trade/business and are using their respective mark with respect to goods of identical description i.e. whisky; the likelihood of the confusion amongst the consumer is very high.

The Plaintiff's counsel also contended that the plaintiff's and defendant's labels are conceptually and deceptively similar as it can be clearly seen that "Fauji" is written in red color slanting upward in a stylized font and has a similar color combination as that of the plaintiff's product. I feel that the argument was correct, however the cases which were produced in support of the same were the ones where in the infringing mark was a direct hindi translation of the original mark or a synonym of the original mark eg. "Peacock" and "Mayur" , "Surya" and "Bhaskar" ,"Sun" and "Suraj" . This actually weakened their case , since in the present case Fauji (military man) cannot be said to be a plain Hindi translation of the word "Officer" as Officer does not necessarily means a Military officer .

In light of the above, I personally feel that the Counsel should have focused more on proving deceptive resemblance and not that infringing mark is a translation of the original mark.

How to determine Deceptive Resemblance?

"For deceptive resemblance two important questions are: (1) who are the persons whom the resemblance must be likely to deceive or confuse, and (2) what rules of comparison are to be adopted in judging whether such resemblance exists. As to confusion, it is perhaps an appropriate description of the state of mind of a customer who, on seeing a mark thinks that it differs from the mark on goods which he has previously bought, but is doubtful whether that impression is not due to imperfect recollection".1

Now in the instant case of M/S Allied Blenders and Distillers Pvt. Ltd. v. Govind Yadav &Anr, it can be clearly seen that the plaintiff is manufacturer of whiskey under the brand name "Officer's Choice", the price of the said whiskey ranges from INR 200 to INR 500 for 750ml bottle. Similarly the defendant who is also manufacturer of whiskey under the brand name Fauji is selling its whiskey at a price of INR 200 for its750 ml bottle.

It is however to be noted that INR 500 is for the Officer's Choice reserve collection and a price as low as INR 200 is for the basic collection. This fact clearly proves that the consumer base for both Officer's Choice and Fauji is the same and basically comprises of poor people; people who cannot afford drinking expensive whiskey.

This group of consumer is not assumed to be literate enough and more or less relies upon their memory with respect to appearance of the product, rather than its name. It is in same analogy as Patients asking for "Red Pill" for Viagra and Purple Pill for "Astrazenca's Nexium" which has been given protection of the colour Purple and Indian drug Giant Dr Reddy was directed to change the colour of its drug which was a generic version of Nexium.

Since the overall packaging of both the whiskey is similar the mark is used in Red Italics in similar fonts and white background, it is most likely to deceive the consumer base and create confusion. In addition to this Fauji bottle also epaulette2 (on which stars are placed according to rank) which is a part of "Ofiicer's Choice" packaging is also present on "Fauji" Bottle with minor modifications. The contentions presented before the court were majorly of translation as a result of which the Hon'ble court in the instant case just failed to consider the visual aspect.

Whereas Hon'ble Delhi High Court itself in its previous judgement has relied heavily on trade dress and overall appearance of the product, in order to determine trademark infringement. In its 2008 judgement3 delivered by, Reva Khetrapal, J , the court allowed the plaintiff's application wherein it claimed that the defendant has infringed plaintiffs' trade mark IMPERIAL BLUE by adopting the trade mark IMPERIAL GOLD and has used the trade dress, get up, colour combination and label of ROYAL STAG, thus committing acts of infringement of trade mark and passing off.

Similar was the 2003 judgement of Delhi High Court , wherein the court reinforced the role played by trade dress and the need for its protection to avoid consumer confusion. Herein, the plaintiff sought an interim injunction against the defendant's use of the trade dress and colour combination of red and white in relation to identical products (tooth powder). It is to be noted that the trademarks used by the two parties, Colgate and Anchor, were completely distinct. However, the court held that4:

"It is the overall impression that a consumer gets as to the source and origin of the goods from visual impression of colour combination, shape of the container, packaging etc. If the illiterate, unwary and gullible customer gets confused as to the source and origin of the goods which he has been using for longer period by way of getting the goods in a container having particular shape, colour combination and getup, it amounts to passing off. In other words if the first glance of the article without going into the minute details of the colour combination, get up or lay out appearing on the container and packaging gives the impression as to deceptive or near similarities in respect of these ingredients, it is a case of confusion and amounts to passing off one's own goods as those of the other with a view to encash upon the goodwill and reputation of the latter."

Making reliance on the precedents given by Delhi High Court itself it can be easily concluded that in cases of trademark infringement, trade dress plays a very important role. In the instant case of M/S Allied Blenders and Distillers Pvt. Ltd. v. Govind Yadav & Anr., it is my humble opinion that had the Plaintiff's counsel pressed more upon the overall packaging of the two whiskeys i.e. Officer's Choice and Fauji it would have given them a better mileage while arguing the case.

2 an ornamental shoulder piece on an item of clothing, especially on the coat or jacket of a military uniform.

ARTICLE TAGS
India Food, Drugs, Healthcare, Life Sciences Food and Drugs Law Intellectual Property Trademark
POPULAR ARTICLES ON: Intellectual Property from India
Patent Application Refused On Obviousness Ground
Khurana and Khurana
A recent case of opposition before the Indian Patent Office highlights the importance of an inventive step.
IP Case Compilation 2019
LexOrbis
Judgement: The Delhi High court granted a permanent injunction in favour of the plaintiff, Hennes & Mauritz, thus securing the rights of a foreign company in their trade mark against the rights
Compulsory Licensing In India
Khurana and Khurana
WIPO defines patent as an exclusive right granted for an invention, which is a product or a process that provides, in general, a new way of doing something, or offers a new technical solution to a problem
Should The Works Created By Artificial Intelligence Machine Be Protected Under The Copyright Law?
Khurana and Khurana
Then came the artificial intelligence systems that brought about a storm in the world of intellectual property law. Since the year 2010 artificial intelligence has developed by tremendous speed.
Pre-Grant Opposition Filed Against Indian Patent Application No. 201721030943 Dismissed
Khurana and Khurana
The Controller was of the view that all the features of the invention are clearly described to enable a person skilled in the Art to practice the invention.
Software Copyright Scenario In India
Aggarwals & Associates
Copyright is a form of intellectual property protection granted under Indian law to the creators of original works of authorship such as dramatic, musical, artistic work and literary works including computer programs, ...
FREE News Alerts
Sign Up for our free News Alerts - All the latest articles on your chosen topics condensed into a free bi-weekly email.
Register For News Alerts
Article Tags
India Food, Drugs, Healthcare, Life Sciences Food and Drugs Law Intellectual Property Trademark
Similar Articles
Powered by mondaq AI
MATCH
67%
Trademark Infringement: Officer's Choice vs. Fauji Khurana and Khurana
Related Articles
Tearing Down A Product To Look For Patent Infringement Khurana and Khurana
Analysis Of Shogun Organics Ltd. V/S Gaur Hari Guchhait And Others Khurana and Khurana
International Framework For Protection Of Intellectual Property In Space Khurana and Khurana
Role Of IP In The Growth Of Disney S.S. Rana & Co. Advocates
Future Of E-Cigarette Patent Applications In India After The Nationwide Ban On E-Cigarettes LexOrbis
Comparative Guides
FinTech
International Arbitration
Labour and Employment
Merger Control
Patents
Mondaq Advice Centres
India
Trademarks
India
Arbitration, Litigation and Conciliation
Global
Trademarks in SAARC Countries
Global
Investment Immigration
More MACs