Of the various forces that have buffeted offshore financial services in recent years, regulation and emerging demand bases are probably the most significant. These forces have guided investors to particular jurisdictions with increasing regularity, altering – but not necessarily redrawing – the map. Indeed, certain locations achieved a pre-eminence within the industry, and for characteristics that are a direct response to offshore demand, that it calls into question the applicability of the term "offshore."

It started with mid-shore. This concept, which entered industry parlance in 2011 or thereabouts, refers to jurisdictions that offer the tax efficiency commonly associated with offshore and a robust legal and accounting infrastructure. Hong Kong, Singapore, Luxembourg and Dublin were readily cited examples of this phenomenon.

While the mid-shore construct is as relevant today as it was five years ago, there is arguably now an even higher echelon: the "super jurisdiction". To qualify, an international financial centre must not only be a place where investors conduct their business, but also be originators of investors themselves and also a primary jurisdiction of incorporation. Not all mid-shore players can be considered super jurisdictions. Luxembourg, for example, is an established hub for international business and a jurisdiction itself, but it is not as strong a source of business as Hong Kong and Singapore.

In addition to these two Asian giants, the likes of New York, Dubai and London come into the mix. Each has a sound business infrastructure, boasts sizeable and sophisticated human resources, sits comfortably in longstanding regional and global financial networks, and possesses considerable local wealth. In short, people – and therefore companies – want to live and work in these jurisdictions, rather than using them primarily as conduits.

Nevertheless, the role of super jurisdiction is not clear cut, not least because the locations that qualify for this status appeal for different reasons. Super jurisdictions will inevitably feature with increasing prominence in the offshore ecosystem – regulation alone will make this so, as it pushes investors towards more substance and more sophisticated jurisdictions – but this will not necessarily come at the expense of traditional international financial centres.

The 2015 installment of OIL's Offshore 2020 Report alludes to these shifting dynamics. Survey respondents were asked to score jurisdictions between one and five, based on their current importance. The British Virgin Islands (BVI) came top with 3.9, followed by Hong Kong and the Cayman Islands on 3.7, and then Singapore on 3.4. There is a sizeable gap to the next tier, comprising, Luxembourg, Jersey, the US and the UK, with between 2.6 and 2.8. The UAE comes in 10th with 2.1 (Figure 1a).

Asked the same question, in terms of their expectations five years from now, Hong Kong and Singapore occupy the top two positions, on 3.9 and 3.7, respectively. The BVI slips down to third, with 3.5, followed by Cayman Islands on 3.3. The US moves up to fifth with 2.8, just ahead of Luxembourg and the UK, with Jersey eighth. Meanwhile, the UAE jumps from 2.4, the largest numerical gain of any of the top 10 (Figure 1b). 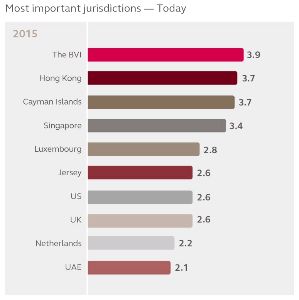 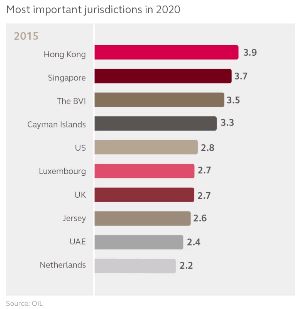 These responses are consistent with previous years. The only area industry predictions have been off the market was three years ago with the suggestion that the BVI and Cayman Islands would lose their following. Data leaks from offshore service providers continue to be a contributing factor, with the so-called Panama Papers generated headlines worldwide - but the concerns have been largely driven by regulation. Tax efficiency was secured through double taxation treaties (DTTs) and only investors who could prove a certain level of business activity in the treaty-holding jurisdiction. Establishing substance – opening offices and hiring staff – was far easier in developed financial centres.

Subsequent pressure on the offshore industry, through the US Foreign Account Tax Compliance Act (FATCA) and its UK equivalent, the EU Alternative Investment Fund Managers Directive (AIFMD), Base Erosion and Profit Shifting (BEPS) and the various initiatives on common reporting standards and anti-money laundering, have exacerbated this impact. For the first time in the history of the survey, new regulations were identified by respondents as the number one business constraint and the primary impact of these regulations has been to raise the cost of doing business.

Staying in business is becoming more expensive for service providers and for the jurisdictions themselves; for example, negotiating with the US over FATCA, as well as with DTT partners and others, require substantial governmental resources, often scarce in small island states. The cost advantages enjoyed by certain locations may erode, but shifts in clientele mindset are equally important. Investors prioritise certainty of treatment even more highly than cost, which means they may gravitate to jurisdictions best positioned to meet their needs in an increasingly complex world.

However, the emergence of mid-shore locations has not – as yet – taken business away from traditional offshore centres. It is true that the latter have adapted, strengthening their systems and processes to meet the heavier compliance burden, and the likes of the BVI and Cayman Islands have such entrenched positions within the industry that it would take years to eliminate them from structures. But the key factor is that mid-shore and offshore are complementary, performing different functions within multi-layered structures.

Super jurisdictions should be seen in a similar way. They are the front end of a financial value chain that could extend through any number of other locations, depending on individual requirements. Hong Kong may serve as the mother ship – and, from a reputational perspective, the public face – for an investor's activities, but there will be demand for holding companies incorporated in the BVI and fund structures set up in Cayman Islands.

While respondents to the Offshore 2020 survey said that the US and UK are the main beneficiaries of new regulations by a significant margin, the next four places are occupied by Cayman Islands, Hong Kong, the BVI and Singapore, respectively (Figure 2). This mixture of traditional jurisdiction and super jurisdiction appears to confirm that offshore financial services are not a zero-sum game; all well-established financial centres can benefit from the industry's changing dynamics.

Although new regulations are believed to be beneficial to the UK, this may change as a result of Brexit as the UK's future as a well-established financial centre becomes the focal point of discussion. However, the abundance and complexity of the factors surrounding the vote mean that at this premature stage, it is unclear what the consequences will be on the status of the UK as a well-recognised and established global financial centre. 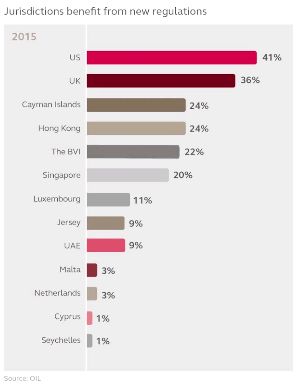 Another consideration is differentiation within the super jurisdiction segment. Dubai, for example, has local wealth and international connections, but it trails its peers in areas such as legal infrastructure, while the popularity of the US has been tied to the country's comparative resistance, to date, to external regulatory pressure. These characteristics will continue to evolve and investors will respond accordingly.

What appears more immutable is Hong Kong and Singapore's place at the top of the value chain. They have long been hubs for capital entering Asia, but increasingly they are platforms for the management of wealth created in Asia.

Survey respondents overwhelmingly ranked Greater China and Southeast Asia as the top two regions for growth over the next five years (Figure 3). They are home to the high net worth individuals whose wealth planning and asset protection needs are expected to become a focal point for the industry. Persuading people to set up in Hong Kong and Singapore and tap into this demand, as service providers or entrepreneurs, is a relatively easy sell.

Figure 3: Growth markets over the next 5 years 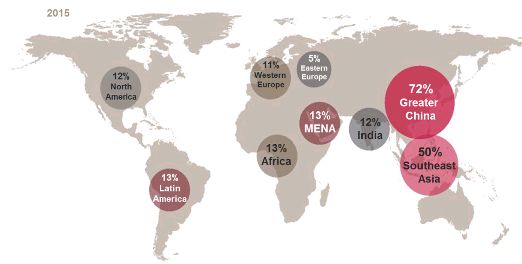