This decision concerns an European patent application for image data arrangement, which was considered non-technical by the EPO. Here are the practical takeaways from the decision T 1294/16 (Image data arrangement/OMRON) of March 10, 2021 by the Technical Board of Appeal 3.5.06:

It is of constant jurisprudence that only features contributing to the solution of a technical problem by providing a technical effect can contribute towards a finding of inventive step.

Differences in mathematics can lead to a finding of inventive step only if they contribute to defining a technical solution in a field of technology not excluded under Articles 52(2) and (3) EPC.

The application relates to the detection of patterns on products in manufacturing context. Starting from the known technique of using normalized cross correlation (NCC) to detect known patterns in grayscale images, the application aims at providing a robust NCC method for color images. For this purpose, the 3-color image is transformed into a 2D or 1D matrix by rearranging the values according to predetermined rules. The NCC is then computed on this matrix. 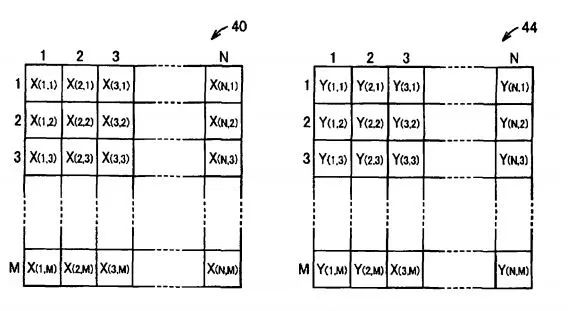 an input image acquiring means (2) adapted to acquire the input image made up of a plurality of pixels defined by three color variables in which each color is independent from each other;

a first data array transformation means adapted to arrange at least two of the three color variables of each pixel contained in the determination target region (OBJ) in a single first data array (40) according to a predetermined rule;

The Board considers claim 1 of the main request obvious in view of D1/D2.

The more interesting discussion for us is about the first auxiliary request:

21. This request differs from the main request in that it defines two alternative rules of arranging the color values in a single data array.

22. This arranging does not change the result of the color NCC, which remains identical to that of D1, as the order of the elements is irrelevant for the result of the computation (compare equation 2 of D1 with equations 1 and 4 in the application). This was not contested by the appellant. There is therefore no technical effect in terms of the results of the detection procedure.

However, the above-given argument was not shared by the Board:

25. In response to this second point, the Board recalls that it is of constant jurisprudence that only features contributing to the solution of a technical problem by providing a technical effect can contribute towards a finding of inventive step (T 0641/00 Two identities/COMVIK, point 6). This is because the EPC provides for protection of inventions, which require a technical solution to a technical problem (Rule 27(1)(c) EPC 1973). It is the (claimed) invention, i.e. the technical solution, that needs to involve an inventive step (Articles 52 EPC and 56 EPC 1973) for a patent to be granted.

Finally, the Board considers that the distinguishing feature of claim 1 of the first auxiliary request has no technical effect:

26.2 The Board does not dispute that a technical effect might be obtained under some circumstances. But this is not sufficient for acknowledging an inventive step, because those circumstances are not claimed (nor are they in fact made clear by the description), which means that the effect is not obtained over the full breadth of the claim, which in turn leads to the conclusion that at least a subset of the claimed matter is not to be seen as a technical solution to a technical problem and hence cannot be acknowledged as an invention involving an inventive step (see also T 0939/92, points 2.4 to 2.6).

27. Regarding the argument as to the convenience for the programmer, i.e. easing the programming effort, this, in principle, cannot be considered to define an invention at all (T 1539/09, Catchword). Arguendo, even if that could be the case, the technical effect cannot be objectively assessed here, because on the one hand the programming language is not specified, and because on the other hand the answer is a matter of subjective preference: while writing code with only two loops may be more convenient, the indexes will no longer intuitively directly represent the standard RGB format, making code reading less convenient.

28. Thus the claimed data transformation means does not solve any technical problem at all, and hence cannot contribute to a finding of inventive step. As in the case of the main request, claim 1 of this request lacks inventive step starting from D1 in view of the common knowledge in the art or from D2 in view of D1 and the common knowledge in the art.

35. The Board has already considered the argument as to the number of loops, so this cannot help the appellant's case. The mathematical formula itself is different to the one in D1, but this is immaterial for the inventive-step assessment in the present context.

Differences in mathematics can lead to a finding of inventive step only if they contribute to defining a technical solution in a field of technology not excluded under Articles 52(2) and (3) EPC. This is not the case here, the proposed formula is only a mathematical equivalent of that in D1 causing no ascertainable technical effect, as discussed in the framework of the previous requests.

Hence, the Board arrived at the result that the subject-matter as claimed lacks inventive step and thus dismissed the appeal.

ARTICLE TAGS
Germany Intellectual Property Patent
POPULAR ARTICLES ON: Intellectual Property from Germany
International Trademark Registration: Update To Nice Classification At Start Of 2023
Novagraaf Group
To register an international trademark registration (IR), you must specify the classes of goods and/or services for which you intend to use your trademark. These are specified according...
Louis Vuitton's 7-year Long Battle To Protect Its Damier ‘Chequerboard' Pattern Comes To An End
Ganado Advocates
Louis Vuitton has lost a 7-year long battle to protect its staple chequerboard Damier Azur pattern.
Slogans – Can They Be Registered As Trademarks?
aera
The report from EUIPO has provided us with the following list of factors which may serve to determine if a slogan has distinctive character.
When A Product Is A Product? A Few Words About The Supplementary Protection Certificate (SPC) Granted To Medicinal Products And Plant Protection Products
JWP Patent & Trademark Attorneys
The Supplementary Protection Certificate, SPC, is the possibility of obtaining additional legal protection for medicinal products and plant protection products manufactured according to the invention...
Trademarks And Brands: Key Considerations For M&A Transactions
Gowling WLG
A brand will not necessarily be crucial in every transaction (and some acquisitions may involve plans to promptly re-brand post-completion), but, where it is, there are some key considerations to bear in mind.
Tesco v Lidl
HGF Ltd
A decision of interest to the retail industry and retailers, but also to trade mark attorneys and lawyers on the everchanging topic of bad faith.
FREE News Alerts
Sign Up for our free News Alerts - All the latest articles on your chosen topics condensed into a free bi-weekly email.
Register For News Alerts
Article Tags
Germany Intellectual Property Patent
Similar Articles
Powered by mondaq AI
MATCH
49%
Patenting Artificial Intelligence And Machine Learning Innovations In Europe Jones Day
48%
Distributing Rewards By Assigning Users To Partial Areas Of An Advertisement Banner: Technical Bardehle Pagenberg
47%
Cinematographic Image Interface: Technical Bardehle Pagenberg
46%
Determining A Threshold Of Operational Parameters Of A Nuclear Reactor: Technical Bardehle Pagenberg
44%
Recording Usage Data For An Industrial Truck: Non-Technical Bardehle Pagenberg
Related Articles
IP Quick Tip: Double Patenting In Europe (Video) Bardehle Pagenberg
IP Quick Tip: Trademarks In The Metaverse (Video) Bardehle Pagenberg
IP Expert Talk: Supplementary Protection Certificates In The System Of The Unified Patent Court (Podcast) Bardehle Pagenberg
Pastiche – "Sleeping Beauty" Or Future-Proof Safe Harbor For Artistic Takeovers Of Works? Morrison & Foerster LLP
Pastiche – »Sleeping Beauty« Oder Zukunftstauglicher Safe Harbor Für Künstlerische Werkübernahmen Morrison & Foerster LLP
Mondaq Webinars
Modern Product Liability: Adapting to the Changing Risks for Product Manufacturers in the US and Europe
Cooley LLP
The New Swiss Data Protection Act - What You Need To Know
FABIAN PRIVACY LEGAL GmbH
More Webinars
Comparative Guides
Anti-Corruption & Bribery
Banking Regulation
Cartels
Cybersecurity
Data Privacy
More Guides
Mondaq Advice Centres
Global
Trademarks in SAARC Countries
More MACs
Upcoming Events
Mondaq Social Media