Executive compensation has been one of the knottiest issues within the corporate governance space and there seem to be no end in sight as to find the perfect compensation package or philosophy for corporate executives across board.

In this article, we'll discuss the evolution of pay for performance and the KPIs you should be using to measure performance effectively.

The evolution of pay for performance

The theme of executive compensation came to the fore front following the 2008 financial crisis where senior management level staff of Merrill Lynch got a payout of about $2.5 billion after running the bank to the aground and the United States Treasury had to force the bank's assets down the throat of Bank of America. Thus, leading to several groups calling for better and appropriate compensation for executives. For instance, in the Netherlands the government decided and passed a law that STI package for staff within the financial service sector shall not be more than 20% of the base salary and in the United States of America this lead to the enactment of the Dodd Frank Act of 2012 which over the years has ensured accountability in executive compensation practices. For instance, it has led to adoption of double-trigger acceleration rather than single trigger and virtually eliminated the once prevalent golden parachute within the American corporate culture.

Despite the changes in executive compensation in the last decades which has led to more companies adopting performance-based compensation to discretionary compensation awards, the question has been what the perfect key performance indicators (KPI) for companies is to adopt. Over the years we have seen continuous increase in pay for executives especially within the big guys and in some case mid-sized companies. The questions then are do companies have the right KPIs or investors have not been paying attention to these pay practices.

Major institutional investors in recent years have harped on having the right KPIs to measure performance sufficiently. For instance, the Council of Institutional Investors in 2019 adopted Executive compensation policy in September 2019 where they stated:

1. Executive compensation should be designed to attract, retain, and incentivize executive talent for the purpose of building long-term shareholder value and promoting long-term strategic thinking.

2. Executive compensation should be tailored to meet unique company needs and circumstances. A company should communicate the board's basis for choosing each specific form of compensation, including metrics and goals.

3. Compensation committees should make compensation disclosures (including those in the U.S.-style Compensation Disclosure and Analysis), as clear, straightforward, and comprehensible as possible. Each element of pay should be clear to shareholders, especially with respect to any goals, metrics for their achievement and maximum potential total cost.

4. Descriptions of metrics and goals in the proxy statement should be at least as clear as disclosures described in other investor materials and calls.
A look at the voting result for remuneration policy of companies between 2018-2020 seem to portray a picture of what the CII is saying. 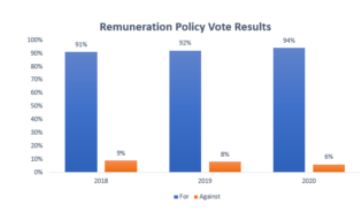 The graph above shows that overall shareholders have consistently voted in favor of executive compensation policies put be for them with support growing by 3% from 2018-2020. However, there is a sound of caution when it comes to executive pay with respect to performance Executives tend to have more information than Board members and may have a lot more knowledge about the workings on the sector where they operate there will likely use such to their advantage.

This has made institutional investors to frown on over reliance of peer groups you used companies. For example, BlackRock note that while its efficient to track performance of company executives using performance peer groups companies should endeavor to outperform their respective peer group. In the case of a company where companies have peer groups that are largely underperforming it will be inaccurate to use a peer group where the company is most likely to excel irrespective of its own performance.

Another knotty issue over the years has been institutional investors position towards shareholder proposals geared towards making changes in executive compensation policy. Though there has been continued conversation around this but voting results seem to show something different. In 2018 shareholder proposals 3M Company, ConocoPhillips and Cardinal Health were rejected by an average of 89% of shareholders voting and these proposals were geared towards creating limits and including additional conditions for executive compensation.

There is a need for institutional investors and groups of retail shareholders to have a come ground around executive compensation more particularly pay for performance and effectively engage with companies round the clock. This also includes ensuring the right set of individuals are appointed to the Board of Directors and more specifically the Compensation Committee.