A persistent high youth unemployment rate around the world is threatening economic growth and putting at risk the well-being of young people aged 15 – 24. The global youth unemployment rate is expected to reach 14.4% in 2023, around 3.4 times the rate for older adults. Amongst the factors triggering youth unemployment, the skills mismatch is a crucial element. We believe it is in the interests of businesses to work with public entities, educational institutions, other stakeholders – and young people themselves - to develop sustainable skills strategies.

Youth employment before and since the pandemic

The global youth unemployment rate had already been escalating dramatically when the pandemic shook economies, leaving millions without jobs. In 1991 when International Labour Organization started making records, the global youth unemployment rate was 9.5%, whilst before the pandemic, in 2019, it had reached 13.5%. A year later, in 2020, millions of young workers were feeling the impact of the crisis. Many of them, especially those employed in hospitality, lost their jobs owing to nationwide lockdowns. The global unemployment rate amongst young people then jumped to an unprecedented level – 15.2%.

Remarkably, a dramatic escalation of the figures as a result of the pandemic was recorded across countries of all income groups. In high-income countries, the youth unemployment rate jumped to 14.5% in 2020 compared to 10.8% in 2019. In 2020, in low-income, lower-middle-income, and upper-middle-income countries, it reached 9.1%, 16.6%, and 16.3%, compared to 8.2%, 15.2%, and 14.7% in 2019, respectively. At the same time, however, the International Labour Organization forecasts that the youth unemployment rate in all income group countries is expected to decrease in 2023 due to economic recovery. Nevertheless, only in high-income countries is the rate likely to reach below pre-pandemic levels. 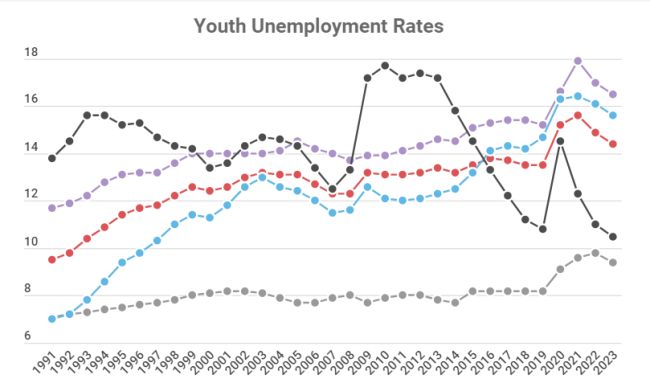 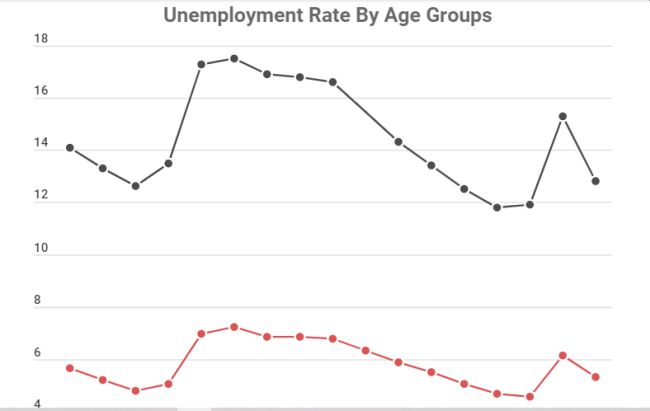 Why is this happening?

Persistent global high youth unemployment rates since 1991 mean that economic recessions are partially responsible for the situation but increasing population size may play a role as well. According to the International Labour Organization, in 1999, the global population of those aged 15 – 24 was 1 billion, while in 2019, it had reached 1.3 billion. However, at the same time, labour force participation decreased from 568 million to 497 million.

Another factor triggering youth unemployment is the skills mismatch, in other words, the difference between the knowledge a position requires and what employees can offer. According to a report published by UNICEF and the World Business Council for Sustainable Development, over half of the 108 countries questioned reported a skills mismatch, meaning that more than 50% of employees in these countries have jobs that are mismatched to their education levels. In many cases, those employees are undereducated.

Why is the skills gap a concern?

While lack of education plays a crucial role, another reason for the skills gap is poor collaboration between educational institutions and hiring companies, as stated by UNICEF. Education programmes target job market needs only partially; therefore, in many cases, educated young individuals entering the labour market still lack the essential skills crucial for different jobs. As a result, they lose out in competition with older generations.

Back in February 2020, UNICEF questioned over 40,000 young people from 150 countries and concluded that many of them were not confident the skills they had received would be sufficient to get them jobs. Around 31% felt the skills offered in the training programmes they were doing failed to align with their expectations. 22% wanted to acquire leadership skills, 19% wanted to gain skills in analytical thinking and innovation, and 16% were interested in developing IT and data processing skills.

While the skills mismatch prevents young people from fulfilling their potential, it challenges companies in multiple ways as well. Employers who can't find a skilled worker for a particular position, risk falling back in terms of productivity, innovation and corporate dynamism – or losing out against their competitors. On a macro-economic level, the skills gap can lead a country to lack competitiveness and may significantly increase the unemployment rate. 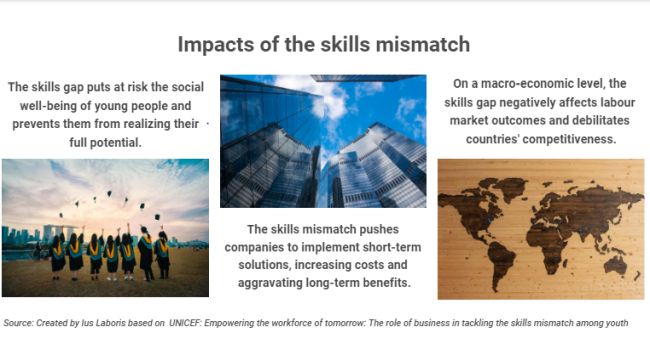 Properly designed education programmes have the potential to at least partially resolve the high youth unemployment that currently characterises our world. But to do so, it will be crucial for businesses to collaborate with governments and education systems to develop suitable programmes. That means developing a sustainable skills strategy, collaborating with other stakeholders and making clear which skills are crucial for the businesses current and future activities. Only close coordination for this kind between governments, educational institutions, the private sector and young people themselves will succeed in shrinking these long-standing skills gaps.