From August 30th of 2016, the Hague Convention Abolishing the Requirement of Legalization for Foreign Public Documents, commonly known as the "Apostille Convention", and which changes the legalization process of foreign public documents, will enter into force in Chile. This treaty was signed on October 5th, 1961, and on December 2015 Chile completed the procedures to ratify it.

What is the apostille?

The apostille is a certification which simplifies the procedure to certify the authenticity of foreign public documents, substituting the current multi-stage legalization process with a single certification, called an apostille.

The apostille in Chile will have some particular characteristics: (i) it will be electronic, meaning that the certification will be performed with an advanced electronic signature and its authenticity will be verified through an online system, (ii) it will be deconcentrated and decentralized, so that individuals will be able to go to different entities (indicated in the following topic) in each of the regions in order to issue apostilles for documents and finally, (iii) it will be free of charge.

It is important to note that an apostille only certifies the authenticity of the signature, the capacity in which the person signing the document has acted and, when applicable, the identity of the seal or stamp on the document. The apostille does not certify the content of the document for which it was granted.

Who may issue an apostille?

How does it work?

The main objective is to allow for documents issued by signatory countries to avoid the traditional multi-stage legalization procedure. Thus, the legalization procedure will be reduced to a single process, whether it is carried out in Chile or in a foreign country will depend on where the document was issued. This will be executed through the issuing of the apostille by a competent authority, which has the effect that the document is considered to be legalized and accepted in every country which is party to the Apostille Convention.

Where does it work?

The Apostille Convention only applies to the 112 signatory countries1 . Although most of the countries that have ratified the convention accept apostilles from all other signatory countries, there are some exceptions. Some countries have approved the Convention with qualifications, and do not accept the apostille from certain members of the Convention. For example, Belgium does not recognize apostilles issued in Dominican Republic, and the latter does not recognize apostilles issued in Belgium. In the case of Chile, there are no such limitations.

Regarding countries who are not members of the Apostille Convention, the traditional multi-stage legalization process must be used.

Public documents issued outside of Chile, in a signatory country, do not need to be legalized in Chile. Once they have been issued an apostille by a competent authority, they may be used in Chile. This has been expressly regulated in article 345 bis of the Civil Procedure Code, incorporated by Law No. 20,711, where it states that if an, "apostille has been issued by the designated authority in the country where the document comes from", it will be sufficient for its legalization in Chile.

Regarding public documents issued on non-member countries of the Convention, the traditional multi-stage process will have to be used.

Besides the Ministry of Foreign Relations, which has generic competence, Chilean institutions designated as competent authorities may only grant apostilles for documents that are within their area of expertise. Thus, an apostille must be requested from the competent authority based on the type of document to be legalized2, after which the document will be valid to be presented to any authority of the other signatory countries.

Template for the Chilean Apostille 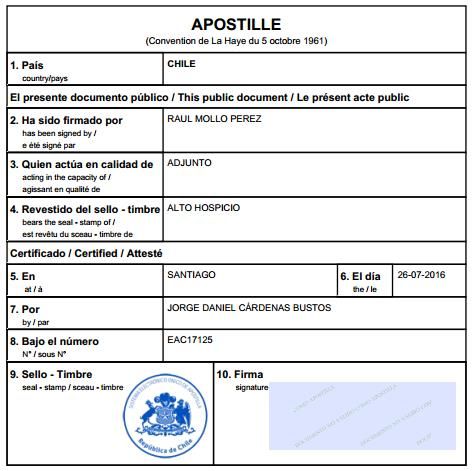