China: Highlights From The 2021 Annual Report

The China National Intellectual Property Administration (CNIPA) has recently released its 2021 Annual Report. We now summarize some of the key information and statistics regarding patents in the Report for you to have an easy overview of the current state of Chinese patent application and prosecution. Please note that there are three types of patents in China, i.e. invention, utility model and design patents.

For applications from abroad, Japan and the U.S. again were the leading countries of origin, followed by Korea and Germany. 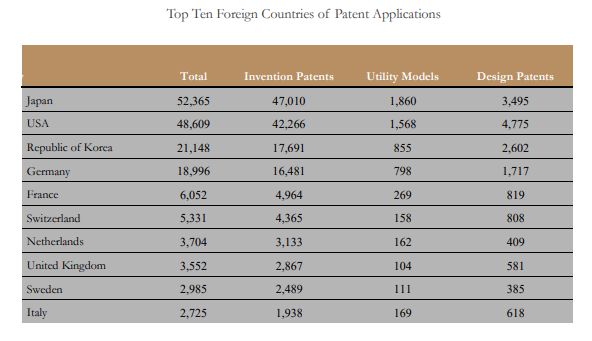 In 2021, 99.1% of all patent application was filed electronically, demonstrating that the option is now fully accepted by applicants.

Over 1.2 million examination procedures of invention patent applications were completed in 2021, with the average pendency time reduced to 18.5 months. The CNIPA launched a special campaign to sort out long-pending cases; and about 217,000 such cases were concluded during the year. 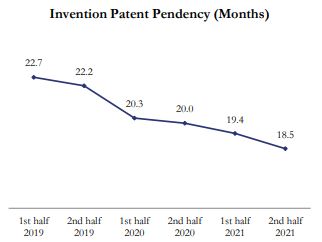 As of the end of 2021, about 3.5 million invention patents were in force. Among them, about 77% was held by domestic entities, and about 23% by foreign patentees. 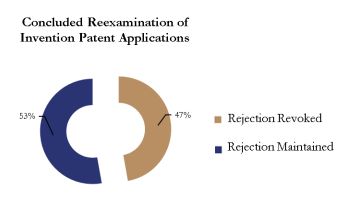 As you can see, in 2021, Chinese patent application activities, including reexamination and invalidation proceedings, continued to be at very high levels and growing. At the same time, the CNIPA was able to decrease the overall pendency time. While the vast majority of the activities were by domestic entities, foreign entities continued to regard China as a very important jurisdiction. This is demonstrated by the large, and still growing, number of patent applications filed by foreign applicants, at about 158,000, which is more than the number of foreign-originated patent applications received by any Patent Office, except the USPTO.

ARTICLE TAGS
China Intellectual Property Patent
POPULAR ARTICLES ON: Intellectual Property from China
Full Court makes its decision on non-human inventors of patents - Commissioner of Patents v Thaler [2022] FCAFC 62
Bartier Perry
It is possible for a patent to have an AI program listed as the inventor on a patent registration.
Assignment And Licensing Of Copyright
S&A Law Offices
Copyright is a protection given to the creators of certain types of works as an acknowledgment to their intellectual input
Delhi High Court Defines Criminal Liability Against Online Marketplaces In India
JSA
One of the most scariest and intimidating situations for any person and more so for employees is being charged in criminal prosecutions in their official capacities on behalf of company/firm...
Bonobos, Inc v Beaumanoir Asia Holding Singapore Pte. Limited [2022] NZIPOTM 17 (22 August 2022)
Davies Collison Cave
A brand owner has successfully relied upon online sales of its products into New Zealand to defeat a non-use revocation action, in Bonobos, Inc v Beaumanoir Asia Holding Singapore Pte. Limited [2022] NZIPOTM 17 (22 August 2022).
Trade Marks And The Metaverse: Recent Trends In India
Sujata Chaudhri IP Attorneys
In the post covid era, the ‘Metaverse' has become one of the most hotly discussed technological advancements globally. More and more brands are choosing to launch their products and advertise...
Is Your Startup Investable?
Photon legal
An investable strategy focuses on the allocation of capital resources towards a business goal. It has been around for a while and is effective in mitigating risk and guiding capital...
FREE News Alerts
Sign Up for our free News Alerts - All the latest articles on your chosen topics condensed into a free bi-weekly email.
Register For News Alerts
Article Tags
China Intellectual Property Patent
Similar Articles
Powered by mondaq AI
MATCH
83%
Chinese Invention Patent Applications Continue Running On High Way In 2014 CCPIT Patent & Trademark Law Office
81%
On Differences Between The Patent Law In Mainland China And Taiwan AFD China
78%
China's Invention Patent Application Grow 21.7% In The First Three Quarters Unitalen Attorneys at Law
76%
Available Approaches To Speed Up The Examination Procedure Of Patent Application In China Kangxin
75%
Ending Patent Subsidies In China IP March
Related Articles
Introduction Of Benefits About Customs Recording Kangxin
CNIPA Rejected Registration Of Trademark FISHE Kangxin
China's IP Protection Wins Recognition Of Foreign Enterprises: Survey AFD China
Suing Grey And Black Industry For Unfair Competition, Tencent Awarded 5 Million Yuan AFD China
China And Cambodia Launch A Design Recognition Project AFD China
Mondaq Webinars
Employer Responsibilities and Employee Rights in Australia
People + Culture Strategies
Future Series: Managing the Risks of ESG Reporting and Compliance for In-House Counsel and Executives
Bennett Jones LLP
More Webinars
Comparative Guides
Franchising
International Arbitration
Patents
Trademarks
More Guides
Mondaq Advice Centres
Global
Trademarks in SAARC Countries
More MACs