Cayman Islands: How China Supercharged The Offshore Market In Cayman And BVI

When Walkers was launched as an offshore law firm in 1964 in the small British dependency of the Cayman Islands it is fair to assume that the founders would never have dreamt their creation would, fifty years later, be working in a cross-border restructuring market driven by China.

Of course businesses from many other countries have also featured in insolvency and restructuring work in Cayman. But it is the emergence of China as an economic superpower and the resulting work it generates for Cayman that really stands out.

Table 1 in the article (download below) explains this phenomenon. Of all the corporates that are listed on the Hong Kong Stock Exchange (HKEX) nearly half are incorporated in Cayman. This is an astonishing proportion for an obscure Caribbean island.

Bermuda is not far behind with just over a quarter.

Turning to the right-hand list on Table 1, of all the companies listed on the Singapore Stock Exchange (SGX), over three quarters are incorporated in Singapore. Nowhere else gets into double figures. Bermuda is the closest with nine per cent, Cayman and BVI don't even get into single figures. 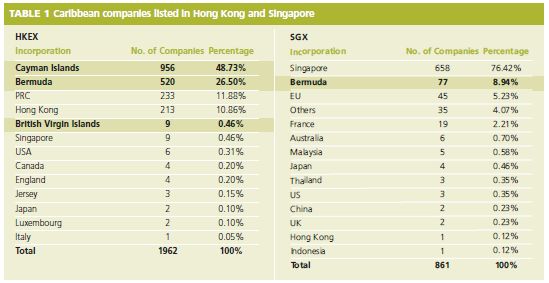 This suggests Singapore still has some way to go in its highly publicised mission to become Asia's Number One cross-border restructuring hub. No clear winner has yet emerged – if it ever will. The future growth of Asia could provide enough business for both centres to flourish. Fraser Hern, Walkers' restructuring and insolvency partner in Asia, said that the use of Cayman as a restructuring venue by corporates from China had grown recently and was likely to continue to increase.

"The biggest part of our job as restructuring and insolvency lawyers in the past five years has been educating clients, whether debtors, creditors, or other advisors, about the merits of using the Cayman Islands legislation to their advantage in any situation where a company incorporated in the jurisdiction is facing financial distress.

"The market reaction has been very significant, and we can't see the trend stopping. If anything, the conditions in the PRC at the moment look like they will create even more opportunities for us in the short to medium term," said Hern.

The Caribbean is also growing in maturity for large, complex litigation cases (see Page 9). Hern's view is that "Some of the biggest shareholder litigation in the world is currently being run through the courts of the Cayman Islands, the BVI and Bermuda, and investors are quickly realising that the commercial courts in these jurisdictions are amongst the most advanced there is, offering time and cost efficiencies not found in many other jurisdictions around the world.

"The PRC shareholder litigation market is contributing significantly to the work load in the courts at the moment, and we see it continuing going forward," said Hern.

Neil Lupton, Walker's restructuring and insolvency partner in Cayman, commented: "When I first came to Cayman in 2003 the offshore link with Asia was already strong. Bermuda had originally been the jurisdiction of choice [for Asian offshore entities]. The growth of Hong Kong companies using listcos in the Cayman has been a feature for a number of years."

"What is new is that the Cayman 'restructuring architecture' is being increasingly, and effectively, used to deal with cases originating in Asia."

"It used to be that the offshore aspect of these restructurings would be ancillary," said Lupton.

"But as the judiciary, legal system and professionals in Cayman have grown in sophistication, so has the use of the Cayman restructuring regime with similar trends occurring in other offshore jurisdictions."

"For instance, large restructurings may previously have been anchored on a US Chapter 11, with perhaps a Cayman Scheme of Arrangement tacked on afterwards. Now a very common structure is a Cayman Scheme, and then US Chapter 15 recognition to deal with any New York law bonds issued by the debtor. This has become quite a common standard," said Lupton.

But it's not just Cayman, and it's not just Schemes. Paul Goss is a senior associate with Walkers who recently returned to the London office from a two-year stint in Hong Kong. Goss observed: "For private company and joint venture investments in the PRC, the BVI remains the jurisdiction of choice, with the Cayman Islands and Bermuda coming to the fore when a corporation is looking to list.

"The jurisdiction in which litigation and insolvency and restructuring matters involving stakeholders or the investment vehicle is played out is often a function of the stage in the life cycle of the corporation in question," said Goss.

"The laws in existence in the respective jurisdictions reflect the type of work that they most commonly see, with the Cayman Islands in particular continually looking to develop its restructuring regime."

"In particular, Asian corporates, with a Cayman top co or subsidiary, wishing to restructure are very interested in the soft touch provisional liquidation that the Cayman Islands offers."

"This provides a moratorium against unsecured creditor action. And you are also increasingly seeing Hong Kong schemes being run in parallel with Cayman schemes and a Chapter 15," said Goss.

John O'Driscoll, who heads up the insolvency and dispute resolution (IDR) team at Walkers in London, said these trends had driven a lot of the growth at the firm, which has now grown to nine offices; "We've seen a big opportunity in restructuring in the offshore world, and this activity is increasing."

This year the firm opened offices in Bermuda and Guernsey. It also has offices in Dubai and Dublin.

Where do you need to be 'offshore'?

According to the OIL 2020 Offshore report for 2015, the BVI has emerged as the world's most important offshore jurisdiction (see Table 2). 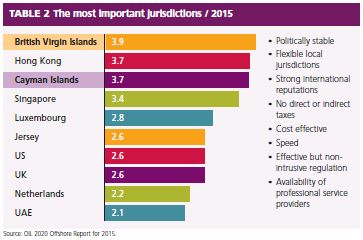 And when it comes the number of companies incorporated, BVI comes second only to Delaware in the US (see Table 3). Table 4 only reinforces the impression of the Caribbean domination of fund incorporations. 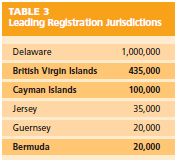 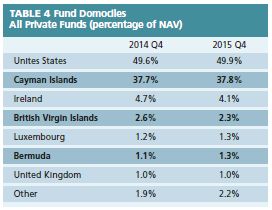 The numbers are striking. Around 80 per cent of the world's offshore investment funds are registered in the Cayman Islands. As at the end of 2015, there were 10,940 registered funds with The Cayman Islands Monetary Authority. Increasingly offshore companies are being used for the downstream spend on investments leading to more operating companies being located offshore. This naturally provides more restructuring opportunities.

Which brings us back to where we started. And it looks like the amount of business flowing from China may only have just begun. It would be fascinating to jump in a time machine and see where the Caribbean market will be in another fifty years time. Or even just five years, at the rate things are going.