The meteoric rise of the electronic sports industry ("Esports") is undeniable. In broad strokes, Esports is a form of competition involving video games and is frequently organized as multiplayer video game competitions (i.e. tournaments or leagues). While Esports has been around for many years, the recent global growth of the industry is worth exploring.

In the fall of 2018, 99 million television and online viewers tuned in to watch the League of Legends 2018 World Championship Finals. The 2018 Super Bowl, often heralded as the gold standard for sport viewership, boasted 103 million viewers, barely outdoing its now-major viewership competitor. In July 2019, 16-year-old Kyle "Bugha" Giersdorf won the Fortnite World Cup and took home approximately $3 million in prize money. In August 2019, OG won the International Dota 2 tournament, with each team member taking home $3.1 million of the $15.6 million first place purse. For perspective, Tiger Woods and Novak Djokovic respectively received $2 million and $2.9 million for winning the 2019 Masters and Wimbledon. Such landmark examples highlight the arrival of Esports as a credible rival to the traditional sports market.

Esports commanded a global television and online audience of 395 million in 2018. This audience number is projected to rise by 12.3% to 443 million in 2019, and close to 600 million by 2022. With Fortnite developers pledging $100M in prize money for their 2019 season and Forbes crowning Cloud9 Esports Inc. as the most valuable Esports company in history with a $310M valuation, it comes as no surprise that investors have begun to take note. Total global revenues are expected to surpass $1 billion in 2019, $409M (37%) of which will be generated by North America. The supporting data is varied and endless, but the central takeaway remains the same: Esports is poised to become a billion dollar mainstream industry and a potential crown jewel for investors. 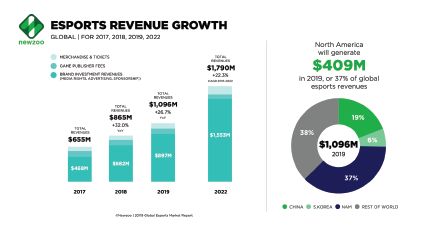 Infographic provided by Newzoo and reproduced with permission

Esports events are competitive video game tournaments that pit individual players or teams against one another. While tournaments can be organized through various means, Esports has experienced a rise in popularity in North America since a traditional sports model was adopted. For example, organizations purchase slots in a league for their city-based teams, which compete throughout a season to win a title. Esports is a subsection of the electronic video gaming, sports and entertainment industries. While the playing of video games and gambling are both referred to as "gaming", the verb "gaming" is used here to refer exclusively to activities related to video games that do not involve gambling.

Esports has become so popular that stadiums are being constructed for the more popular events, such as the Overwatch League. The 2019 Fortnite World Cup (prize pool of over $30M) was played in New York's Arthur Ashe stadium, home of The US Open (Tennis). Similar multi-day Esports tournaments routinely sell out arenas across North America, from New York's Madison Square Garden to LA's Staples Center. The opening of The Gaming Stadium in Richmond, British Columbia in 2018 established Canada's first dedicated Esports gaming stadium. The 2018 International Dota 2 Championships took place in front of a sell-out crowd at Vancouver's Rogers Arena and featured a prize pool of over $25M.

Given the above, Esports' rapid rise to prominence is unsurprising. The supporting framework for the industry exists domestically. The Canadian gaming industry has enjoyed strong growth in recent years, contributing an estimated $3.7B to the country's GDP in 2017. In 2018, a study reported that 61% of Canadians identified themselves as a "gamer".

As with traditional sports, only a few select gamers have a chance to compete professionally. If good enough, players are scouted and drafted onto professional teams that compete in matches streamed on digital platforms for viewers to enjoy. Amazon-owned "Twitch" is the dominant platform of choice for viewers while YouTube, Facebook, Mixer (Microsoft) and other independent streaming platforms control the rest of the market. Broadcast TV is also inching its way in, as evidenced by League of Legends' recent deal with ESPN+.

Players make a significant amount of money from streaming; teams and organizations make most of their money from advertising and merchandise sales. As the industry continues to grow, opportunities will present themselves in ancillary areas. These areas include, without limitation, cloud gaming, design and development, 'brick and mortar' venues, merchandising and social media. While gambling on Esports is currently illegal in most of the United States and all of Canada, recent developments in the licensing of sports betting in a number of U.S. states (and potentially in the Province of Ontario) have opened up a wide range of new business opportunities.

What is happening in Canada?

The area of the Canadian Esports market with the highest and most substantial growth is media rights revenue, projected to reach $11M USD. The development of Esports leagues in a manner that mirrors traditional sports leagues has helped solidify Esports as a legitimate industry in North America, one that is just scratching the surface of its monetization potential.

In May 2019, Toronto-based company OverActive Media ("OAM"), owners of the Toronto-based Overwatch team "Toronto Defiant," bolstered their Esports presence by purchasing a spot in the Call of Duty professional league. They also acquired both the company Media XP and the Spanish organization MAD Lions Esports Club, the latter of which provides them with a European hub to grow their brand. OAM is currently the world's only Esports organization to own teams in the three largest franchised leagues. Recently, OAM announced that Toronto's Roy Thomson Hall will be the home venue for all Toronto Defiant matches for the upcoming 2020 season.

Franchise owners of traditional sports teams are also entering the industry, with the intention of not only investing in existing infrastructure, but creating their own teams. Live streaming continues to be the principal channel for viewership, but franchising provides teams with a regional base from which to glean local interest and revenue.

Canadians are already investing in the industry, including notable celebrities. Drake, a prominent Canadian hip-hop artist (among his many titles), recently became a co-owner of the Esports brand "100 Thieves". Not to be outdone, Drake's Canadian contemporary, The Weeknd, recently became a top investor in OAM. Investment terms were not disclosed, but it appears The Weeknd will play a role in marketing and increasing awareness for the Toronto Defiant. In addition to the obvious popularity and exposure these celebrities bring to Esports, it is likely more big-brand names will follow. In turn, this will boost both the overall popularity and valuation of the industry.

With the Toronto Raptors winning their first ever National Basketball Association Championship in June 2019, many eyes are now focused on Raptors Uprising, the team's Esports equivalent in the NBA 2K League (the "League") which has gained a significant presence in the Esports arena. Similar to the creation by the Union of European Football Associations (UEFA) of the soccer-oriented ePremier League, the eChampions League and the FIFA eWorld Cup, the League is a joint venture between the NBA and Take-Two Interactive. Similar to the Raptors, Raptors Uprising is owned by Maple Leaf Sports & Entertainment (MLSE).

Out west, the Aquilini Group ("Aquilini"), which owns the Vancouver Canucks and Rogers Arena, made a significant foray into Esports in 2018 by purchasing a slot in the Overwatch League for their team, the "Vancouver Titans." Following their team's success, Aquilini's subsidiary (Aquilini GameCo Inc.) acquired Luminosity Gaming in March 2019, which already had teams competing in various Esports leagues.

Given the very rapid rise of the industry in North America, it is not surprising that investors here are just beginning to take note of this burgeoning market that is far from maturation. Mining and cannabis are examples of industries that witnessed Canadians taking advantage of their growth to solidify themselves as dominant industries both globally and domestically. Esports could be the next industry poised to follow a similar trajectory.

What does this mean for investors?

Industry interest is projected to rise with increasing viewership, more centralization of teams and the continued adoption of traditional franchise-style leagues. As with any industry in its early-growth stages, Esports is attracting a number of investors looking to capitalize on newfound opportunities. From February 2019 to July 2019, Canaccord Genuity reported 27 disclosed funding rounds totaling $281.4M (four transactions were for undisclosed amounts) and 12 disclosed M&A transactions.

Highlights of deals and activity involving Esports include the following:

Esports is not immune from traditional investment arrangements; in fact, the industry has attracted investments of every size and shape, whether by way of developing meaningful revenue generating opportunities out of existing structures, or breaking into the space with novel endeavors requiring customized legal and strategic navigation. Familiar investment methods, such as venture capital and private equity, have helped propel deal flow in the Esports industry and have contributed to the rapid growth of investment in primary Esports categories.