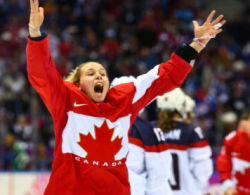 The gold medal women's hockey game between Canada and the US was the event I was most looking forward to during the PyeongChang Olympics — but I fell asleep. Despite my best efforts, with an 11pm local start time, overtime and a shootout, I had no chance of staying up. It's this one game every four years that holds special meaning (read, gets the best publicity in terms of women's hockey), and I missed the thrilling ending.

Over the past century, women's sport has come a long way: from originally not being allowed to compete in the Olympics at all, to currently competing in every event that men compete in.

And there have been other signs of progress. A 2017 survey by BBC Sports found that 35 out of 44 major sports actually pay equal prize money to men and women. That proportion is not bad, except that the survey only looked at prize money for world championships and events of an equivalent standard. It did not include wages, bonuses or sponsorships, which continue to be considerably skewed (sometimes by a factor of 40!) towards men, while the most lucrative sports remain far away from equalizing remuneration to men and women.

Unsurprisingly, sports with the biggest gender pay gaps include basketball, football, cricket, golf and soccer. Tennis has the lowest disparity in pay resulting from extensive campaigning by women in the sport, starting with Billie Jean King and eight other female tennis players in 1973. Yet, even in tennis, the top male players consistently earn more annually due to better sponsorship deals, typically making up the majority of a professional player's earnings.

In the debate on equal pay in sports, some argue that male players should be paid more than female ones on the grounds that they generate more cash for the sport. However, even when women raise more money than men, women are still paid less. Take for example, the US women's soccer team, ranked number one in the world in 2015 (30 places above the men), who generated nearly US $20 million more in revenues that year, but were paid significantly less than the men.

In terms of prize money, the US women's win in the women's 2015 World Cup earned them a US $2 million reward. Meanwhile, in the men's World Cup, the winners received US $35 million just a year earlier. A study by Women on Boards noted that not only did the US women's team receive prize money that was a fraction of the amount the men's game received, but that female US soccer players also received four times less than the male US soccer players (in the men's version of the tournament), despite the men's loss in their first knockout match. 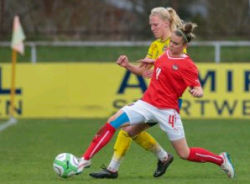 Where does the fundamental shift in society need to take place? Historically and culturally, some societies have viewed sport and physical training, as a whole, to be "unsuitable for women," leading to lower participation of women in sports. Often, girls are discouraged (if not forbidden – gasp!) from participating in sports that are considered to be more masculine, starting bias at an early age. So clearly, women's treatment in sport has been an expression of wider gender inequality and, as sports evolved and professionalised, the issue became self-propagating. The large funding disparity between male and female sports means that women have had fewer opportunities to play sports, have suffered from inadequate coaching and facilities compared with what men are offered, and have been paid poorly, even when playing internationally.

This has further translated into uneven opportunities for sponsorships and marketing, to the extent that most female athletes around the world are unable to secure a livelihood from their sport. So why would any girl want to become an athlete if that's what the future holds? And so, the cycle continues.

Many argue that women earn less because the market dictates it. I've heard the comment that "women's sport is not as physical and not as good to watch", but even with the small amount of airtime, coverage of women's sport has historically been more sexualised, with an emphasis on physical attractiveness rather than athletic competence. This has damaged the quality of sport – and therefore the appeal of the product to fans and broadcasters. It's the "chicken and egg" phenomenon; audiences will not get excited about women's sport since it gets minimal exposure in the media, and the media justifies the lack of coverage by saying that women's sport does not generate enough audience engagement.

However, it's not all doom and gloom; the demand for televised female sports is growing, with social media playing a huge part in increasing popularity of athletes, regardless of gender. So the quality of women's sport is also gradually increasing, leading to a product that more spectators will want to watch. But the change is happening slowly, and people and organizations need to continue to lead, and invest.

It's clear that achieving equality in women's sport requires effort at all levels of society, from governing bodies (where fewer than 30 per cent of board seats are held by women), corporations, sponsors and the media, to early education and family life.

There isn't an easy solution. It's likely a combination of athletes and fans advocating for what's right; administrators supporting them, and a complete overhaul on society's views towards women and sports from an early age. Simple, right? But it's occasions like today, International Women's Day, that remind us that creating public awareness can have a large impact on the eventual eradication of gender bias in sports pay.

What a great occasion to continue to raise the profile of women in sport, celebrate phenomenal female athletes and champion participation for women of all ages and backgrounds. It is my hope that I can see more Canada-USA women's hockey games over the next four years, so I don't have to worry about staying awake in 2022 when the Olympics move to Beijing.

Connect with the Authors

Adam Scherer, BA, CPA, CA
Adam is a Tax Partner at Crowe Soberman whose client portfolio includes high-net-worth individuals, owner-managers, professional athletes, film directors and producers, U.S. corporations operating in Canada, and individuals immigrating to and emigrating from Canada. He is also the co-leader of the firm's Sports & Entertainment practice.