by Cheryl V. Reicin and Jordan Wright
Torys LLP
Your LinkedIn Connections
with the authors

The Canadian life sciences industry began in 2022 as expected, with less deal flow than the flurry of deals in the first three quarters of 2021, but attracting more funding than in Q4 2021.

While investors appear to be exhibiting more caution this year than last year, a substantial amount of funds have still been deployed by venture capital firms, particularly through earlier stage deals. In turn, these venture capital funds continue to attract further investment. As well, interest by U.S. and other foreign funds in Canadian life science companies continues to increase as the industry matures.

Venture capital investment in Canadian life science companies reached $342 million across 17 deals in the first quarter of 2022 (Figure 1). Despite this being a significant drop in deal volume compared to Q1 of 2021, the aggregate amount of capital injected across the 17 deals represented a far smaller decrease when compared to the aggregate total in Q1 of 2021. 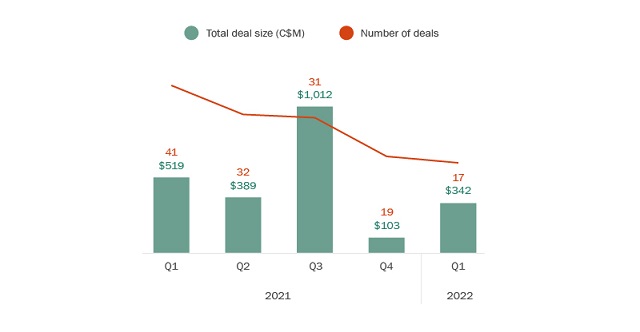 Source: PitchBook Data, Inc., based on deals from Jan 01, 2021 to Mar 31, 2022. Excludes failed/cancelled deals. Data has not been reviewed by PitchBook analysts.

The upward trend in activity was particularly evident in mid-market deals. When comparing deals from Q2 2022 against Q1 2021, deals of less than $50M saw an 11% drop, while deals in the $50M -$100M range saw an 8% increase (Figure 2). As the year progresses, the mid-market will likely see the most growth. We expect to see more of the larger funding rounds in the drug discovery and biotechnology space.

Drug discovery has remained the leading sector for life science venture capital investment in Canada, gaining a healthy 10% increase in deal flow compared to Q1 of 2021 and taking almost half the amount of venture capital investment for Canadian life science companies (Figure 3). To date in 2022, diagnostic equipment companies have netted no new VC investment, while biotechnology has seen almost double the amount of VC funding compared to the same quarter last year.

The ongoing push behind drug discovery and biotechnology comes as no surprise, as investors and the market alike continue to see greater value in new drug options and vaccine development. 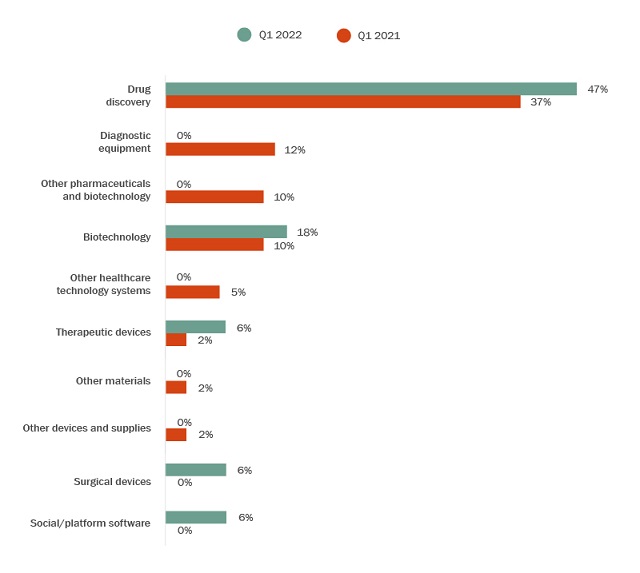 Foreign venture capitalists continue to invest in Canadian life science companies, with the U.S. remaining the largest source of international investment. The level of U.S. venture capital remains at a strong level. In Q1 of 2022, Canadian life science companies received over 3 times the amount of investment that they received in Q4 of 2021, but still less than in Q3 of 2021 (Figure 4). 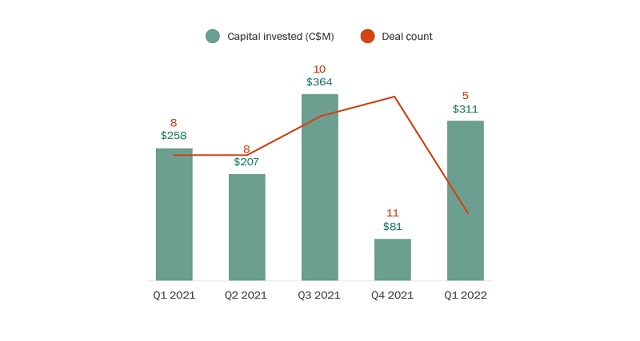 In the first quarter, British Columbia took the lead in Canadian life science investment in terms of deal flow, while Québec exceeded all other provinces according to amount of capital invested (Figure 5). Québec's position as the leader is largely attributable to Ventus Therapeutics' C$176.90M Series C financing round, which was co-led by Softbank Vision 2 Fund and RA Capital Management1.

Source: PitchBook Data, Inc. based on deals from Jan 01, 2021, to Mar 31, 2022. Excludes failed/cancelled deals. Data has not been reviewed by PitchBook analysts.

Stakeholders in Ontario's life science ecosystem are likely encouraged by Ontario's March 31, 2022 announcement of its new Life Sciences Strategy. Against the backdrop of some innovational and infrastructural gaps revealed by COVID-19, the Ontario government sees abundant opportunity for modernization and growth in the Life Sciences industry. The two-phase strategy aims to increase manufacturing capacity, solidify supply chain infrastructure, improve manufacturing readiness, facilitate life science innovation and increase employment in the biomanufacturing and life sciences sector. As a start, Invest Ontario announced a $40 Million loan to OmniaBio, a Canadian cell and gene therapy contract development and manufacturing organization (CDMO), which will be the anchor tenant in a new biomanufacturing campus being built in Hamilton's McMaster Innovation Park.

The unveiling of its "Taking Life Sciences to the Next Level" strategy represents an earnest commitment to Ontario's life science sector and, perhaps most importantly, reflects a confidence in the province's potential as a life science power. The Ontario government's new life science strategy may serve as an additional factor to attract and incentivize investment into Ontario life sciences for a sustained period of time.

While there is currently a degree of uncertainty in global life sciences markets, investment in Canadian companies has continued amid an ongoing trend for larger deal sizes, and the overall outlook for the Canadian life sciences industry remains strong. Increased government support and an expanding talent base, particularly in Ontario, BC and Québec, should serve as a catalyst for strong sector growth. Moreover, as the talent wars in Boston, San Diego and Northern California continue to rage in this sector, we may see increasing interest from U.S. investors and companies to access Canadian innovation and talent.