The first regulatory framework specifically targeting the natural gas market in Brazil was created more than 10 years ago, through the enactment of the Federal Law No. 11,909/2009, followed by the Federal Decree No. 7,382/2010. However, less than five years later, in 2013, the first regulatory reform was proposed, Bill of Law No. 6,407 of 2013, as the original legislation did not seem sufficient to promote competitiveness and expansion of gas transportation infrastructure in Brazil at the time. This is because, despite the end of its legal monopoly to oil and gas exploration in 1995, Petrobras continued to exercise a dominant position in the entire gas value chain.

Discussions on the structuring of a new regulatory scenario for natural gas in Brazil have dragged on for years and only intensified in 2015, when Petrobras announced a divestment process to reduce its position in oil and gas midstream and downstream sectors in Brazil. Soon afterwards, the Federal Government launched the Gas to Growth (Gás para Crescer) initiative to guide the gas regulatory reform by establishing the guidelines for an open and competitive gas market, considering the expected reduction of Petrobras' role in this sector.

The National Energy Policy Council ("CNPE") stepped in during the structuring work of the new Brazilian Gas Market and published CNPE Resolution No. 10/2016, which set forth strategic guidelines for the design of a new gas market in Brazil, focused on the promotion of competition.

Other programs and initiatives followed, including an agreement between Petrobras and the Administrative Council for Economic Defense (CADE), the Brazilian Antitrust Authority with which Petrobras has agreed to several commercial commitments to support its voluntary divestment of the Brazilian gas market, to enable the diversification of players and the attraction of new investments to expand the sector's infrastructure.

After many years of debates among Federal and State governments, industry agents and Brazilian society, Law No. 14,134/2021 ("New Brazilian Gas Law") and Decree No. 10,712/2021 ("New Regulatory Gas Decree") were finally published to create the necessary basis for the new Brazilian gas market, based on efficiency, competition and best international regulatory practices.

On April 04, 2022, the CNPE published Resolution No. 03/2022, which established additional strategic guidelines to improve energy policies related to the promotion of free competition and created the basis for the transitional period to a competitive market. 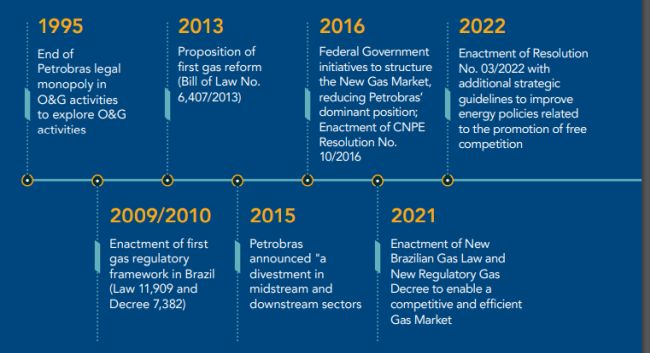 To understand the relevance of the rules created by the New Brazilian Gas Law and New Regulatory Gas Decree and their potential impacts on the Brazilian gas scenario in the next few years, take a look at the main changes promoted by the new Brazilian gas regulatory framework:

The New Brazilian Gas Law establishes corporate restrictions among the gas industry agents, preventing transporters from having (i) indirect or direct corporate control or (ii) an affiliation1 relationship with companies or consortiums performing activities of exploration, development, production (E&P), importation, shipment and commercialization of natural gas.

The New Brazilian Gas Law grants thirdparty access not only to gas transportation pipelines, but also to essential facilities (gas offloading systems, gas processing facilities and LNG terminals), which shall be negotiated in good faith and in a non-discriminatory manner by the facilities' owners, who will retain a preference for using its facilities. The third-party access to gas transportation pipelines will be further regulated by National Agency of Petroleum, Natural Gas, and Biofuels ("ANP").

In many States, the rights of local consumers related to gas distribution is limited to the producers and importers, considering the obstacle imposed by the distributors by restricting competition for the molecule in the captive distribution market. Thus, specific regulatory frameworks reach the inconsistency of forcing the producer to sell its gas to the distributor in order to enforce its right of access to distribution, even in cases where the producer is the final consumer of its own product.

Other States, despite admitting the figure of the "free consumer", impose extensive classification requirements and regulations for such an agent, increasing the regulatory cost of these market transactions.

Among other aspects, the CNPE Resolution No. 03/2022 established that: