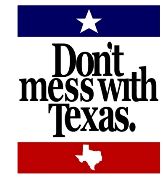 As a native Texan, I always feel a bit nostalgic and homesick around early March. Not only is bluebonnet season (read: spring) around the corner (if only that were true here in Boston!), but March 2 marks Texas Independence Day – the date on which, in 1836, Texas declared its independence from Mexico. Although the Republic of Texas lasted only ten years, its fiercely independent spirit seems to live on in the tenacity with which the Lone Star State asserts trademark rights in Texas's unique brand. In honor of Texas Independence Day, we have rounded up a few recent tales of trademark showdowns involving the state's iconic images and slogans.

Just four days after the signing of the Texas Declaration of Independence, on March 6, the Texian defenders of the Alamo fell to the forces of Mexican General Santa Anna. Several weeks later, the battle cry of "Remember the Alamo!" helped spur Sam Houston's troops to ultimate victory over Santa Anna in the Battle of San Jacinto on April 21. The mystique of the Alamo is not lost on the scores of businesses that have adopted it as a trademark (e.g., Alamo Rental Car). As we reported in December, a fight is currently brewing between two beer companies both seeking to capitalize on the Alamo's image, and the State of Texas has inserted itself into the breweries' dispute.

San Antonio-based Alamo Beer Company has been selling beer under the ALAMO mark since 1997. In conjunction with its word mark, Alamo Beer has always used a logo and trade dress based on the distinctive roof outline of the Alamo mission building. In 2011, Old 300 Brewing, d/b/a Texian Brewing Co., launched its TEXIAN beer brand, and in 2012 it began using a logo that likewise incorporated the Alamo roofline. After cease and desist correspondence from Alamo Beer, Texian removed the image from its beer packaging but continued to use it on advertising and bar tap heads.

In March 2014, Alamo Beer sued Texian for infringement of its logo and trade dress. The suit apparently caught the attention of the State of Texas, which (through its General Land Office) owns the physical building of the Alamo, a popular tourist attraction in San Antonio. The state moved to intervene in Alamo Beer's lawsuit, claiming that it owned the image of the building and the right to commercialize it to whatever extent it chose. Texas does, in fact, commercialize the image of the Alamo, primarily on what plaintiff Alamo Brewing refers to as "souvenirs and trinkets" sold in the Alamo gift shop. The state owns a number of federal registrations for the word mark THE ALAMO and for a design mark featuring the wording "The ALAMO" under an outline of the Alamo roofline. The registrations cover a variety of goods and services, including clothing, blankets, tote bags, jewelry, and documentaries on DVD. Just before filing its motion to intervene, Texas filed new applications to register its ALAMO marks in connection with bottled water and a variety of foods, such as barbecue sauce, candy, and soup mix – goods that the state apparently believes are more closely related to beer.

Alamo Beer was not pleased about Texas's attempt to intervene in its infringement suit, and to assert an interest in the use of the Alamo name and image in connection with beer. Alamo Beer opposed the state's motion, arguing that the state's use and registrations in connection with souvenirs did not give it rights in the market for beer, and that the fame of the Alamo building itself did not constitute fame as a trademark sufficient to give rise to a right to prevent dilution. Alamo Beer also pointed out that ownership of a building does not necessarily imply trademark rights in images of the building, citing a 1998 Sixth Circuit case involving Cleveland's Rock and Roll Hall of Fame. Finally, Alamo Beer noted that it had been using its marks predominantly in San Antonio for seventeen years, hinting at a possible laches defense to an attempt by the State to put an end to its use.

Texas, however, argues that its extensive use of the ALAMO word and design marks on diverse products has created significant goodwill, and that the public would expect that products bearing ALAMO marks are produced or authorized by the state of Texas. The Court ultimately granted the state's motion to intervene, and it appears that the case is headed toward mediation.

The phrase "Don't mess with Texas" has become so well known as a slogan of state pride that it may surprise some to learn that it originated in the 1980s as a campaign of the Texas Department of Transportation ("TxDOT") to keep litter off of the Texas highways. Capitalizing on the runaway popularity of the slogan, TxDOT has put the words on an array of merchandise and owns federal trademark registrations for the phrase in connection with bumper stickers, clothing, magnets, key chains, mugs, and the like.

TxDOT is also diligent about enforcing its rights in the slogan against would-be infringers and parodists. In 2011, Texas sued author Christie Craig, her publishers, and Barnes & Noble over their impending publication of a romance novel under the title Don't Mess with Texas. The court denied TxDOT's motion for a temporary restraining order to prevent publication, but the parties ultimately settled the case, and subsequent printings of the book were released under the title Only in Texas.

More recently, TxDOT opposed a federal application filed by Ohio Mobile Billboard, LLC to register DON'T MESS YOUR PANTS IN TEXAS in connection with bumper stickers, t-shirts, sweatshirts, and hats. TxDOT alleged both likelihood of confusion and dilution by tarnishment, and pointed out that, in addition to infringing its federally registered marks, the Applicant was attempting to appropriate the state's common law rights by imitating its trade dress. Although the Applicant filed an answer to the opposition in November 2014, and the proceeding is still pending, it appears that the DON'T MESS YOUR PANTS webpage and Facebook page are no longer accessible. It seems that TxDOT is doing an effective job of keeping not only the state's highways but also its image, and the trademark registry, clean.

As Texans celebrate their (former) independence this week – and Alamo Beer, for one, encourages celebration with its "Siege Week" events – perhaps they can take pride in knowing that their state is still fighting to protect its unique identity, at least on the branding battlefield.