Continuing our scintillating series of failure-to-function rulings, the Board affirmed a refusal to register the proposed markEL CABO, in standard character and composite form (shown below), for entertainment services. The Board found that Applicant's specimen of use "does not reflect that consumers of Applicant's services will perceive [either mark] as trademarks indicating . . . television entertainment services." In re Caracol Televisión S.A., Serial Nos. 87916944 and 879169481 (August 24, 2022) [not precedential] (Opinion by Judge Peter W. Cataldo).

The critical inquiry in determining whether a designation functions as a mark is how the designation would be perceived by the relevant public. To make this determination we look to the specimens and other evidence of record showing how the designation is actually used in the marketplace.In re Eagle Crest Inc., 96 USPQ2d at 1229.

Examining Attorney John Hwang submitted screenshots fromWikipedia,listing the characters in Applicant's television series,The Cartel (also known as "El Cartel de los Sapos" or "The Cartel of Snitches"). The character names Milton Jimenez, alias El Cabo ("The Corporal), is third on the list. In applicant's specimen of use, "El Cabo" appears at the bottom of the web screenshot, in standard small font below the actor's name and next to a caricature depicting a man, with the term EL CABO appearing below it. By clicking on an arrow button, users can find other characters in the TV show. 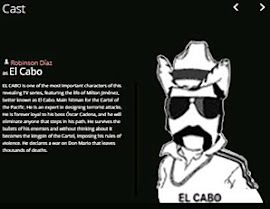 The Board noted that fictitious or fanciful characters may function as source identifiers: e.g., a photograph of a performer wearing a consumer was found acceptable for entertainment services inIn re Red Robin Enterprises, 22 USPQ 911, 914 (TTAB 1984). However, the use of such a character "must be perceived by the purchasing public not just as a character but also as a mark which identifies and distinguished the source of the goods and services."

Inspecting the specimen of use closely, the Board noted that it clearly displays the term "Cast" about the name of the actor who plays El Cabo. In short, the specimen does not use either the word mark EL CABO or the composite mark as a source indicator for the television program.

We emphasize that a proposed mark must not solely "identify" the services but must also "indicate the source of the services." 15 U.S.C. § 1127. Applicant's specimens identify Applicant's television entertainment services, but do so in connection with the term El Cartel. The applied-for marks, even if they do appear on the same page, denote a character in that television series, and do not indicate the source of the services.