Pryor Cashman Partner Dyan Finguerra-DuCharme, who is Co-Chair of the firm's Trademark Group, was interviewed on CNBC's The News With Shepard Smith about a lawsuit filed by client META against Meta Platforms, Inc. (formerly Facebook), alleging violations of META's trademark.

During the segment about the litigation, Dyan explained META's situation to reporter Andrea Day, which involves the trademark theory of "reverse confusion." Dyan said that infringement arises,

"When you've got a small player who's been doing their business for a period of time, and then you get a giant corporate behemoth with sheer arrogance says 'I'm going to own this mark now and I'm going to do business with this regardless of the fact that you were here before me,'" she told CNBC.

Finguerra-DuCharme said the two companies engaged in eight months of negotiations. Despite handing over thousands of pages of information to resolve the issue, Meta Platforms would not come to the table, she said.

"Now my client goes out to try to market and promote its services, consumers now falsely and mistakenly believe that its services are coming from Facebook," she said.

Finguerra-DuCharme says her client has no option but to sue. According to the complaint, META's business has been "irreparably and irrevocably harmed." 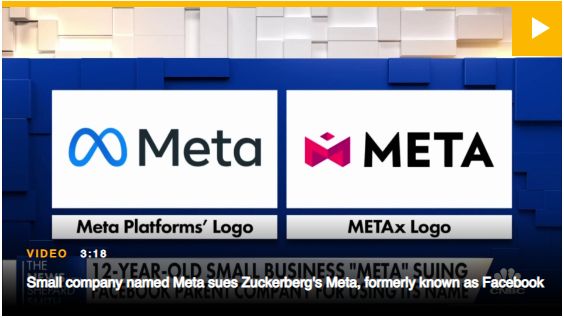