by Ryan A. Varnum
Smith Gambrell & Russell LLP
Your LinkedIn Connections
with the authors

Earlier this month, the United States Court of Appeals for the Federal Circuit issued an opinion in the case of Novartis AG et al., v. Ezra Ventures LLC, case number 2017-2284, again finding that the judicially created, non-statutory, obviousness-type double patenting doctrine may not be used to invalidate or cut-short additional patent term conferred under the patent term extension (PTE) provisions of 35 U.S.C. § 156.

The court previously addressed a similar question in the case of Merck & Co. v. Hi-Tech Pharmacal Co., 482 F.3d 1317 (Fed. Cir. 2007), in which it held that obviousness-type double patenting does not invalidate an otherwise validly obtained PTE under § 156.  In this recent opinion the court addressed whether a PTE granted to a first patent under § 156 is improper if it "effectively" extends the patent term of a second patent.

This case concerns two patents owned by Novartis AG (Novartis) – U.S. Patent No.'s 5,604,229 and 6,004,565.  The '229 patent covers a large number of compounds including fingolimod, and the'565 patent covers a method of administering fingolimod.  Novartis filed an infringement suit against Ezra Ventures LLC (Ezra) asserting infringement of the '229 patent.  Ezra filed a motion for judgment on the pleadings arguing that the '229 patent should be ruled invalid, or otherwise terminally disclaimed as to any patent term that exceeded the expiration date of the '565 patent, on the grounds of non-statutory, obviousness-type double patenting.

The following timeline illustrates the relevant dates for the '229 and '565 patents: 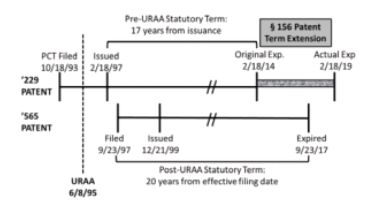 The court found Ezra's argument unpersuasive as it would require reading the word "effectively" into the statutory language of § 1.56(c)(4).  Specifically, the court reasoned that the intention of § 1.56(c)(4) is to limit a legally conferred PTE, not an "effective" or "de facto" PTE, to one patent selected by the patent owner.  In this instance, the court found Novartis to have properly complied with the language of § 1.56(c)(4) by invoking § 156 to extend the term of only the '229 patent, with a certificate of extension recorded in the official file of the patent and considered as part of the original patent.  The court held that the fact the method of the expired '565 patent cannot be practiced during the '229 patent's extended term is a permissible consequence of the legal status conferred upon the '229 patent by § 156.

Upon finding the PTE granted to the '229 patent proper, the court then followed the precedent of Merck in refusing to invalidate the extended term of the '229 patent based on obviousness-type double patenting.