United States: The Joys And Dangers Of Tweeting: A CDA Immunity Update

by J. Alexander Lawrence
Morrison & Foerster LLP
Your LinkedIn Connections
with the authors

A recent decision from a federal court in New York highlights the limits social media users enjoy under Section 230 of the Communications Decency Act (CDA). The case involves Joy Reid, the popular host of MSNBC's AM Joy who has more than two million Twitter and Instagram followers, and the interaction between a young Hispanic boy and a "Make America Great Again" (MAGA)–hat wearing woman named Roslyn La Liberte at a Simi Valley, California, City Council meeting.

The case centers on a single re-tweet by Reid and two of her Instagram posts.

It says: "You are going to be the first deported" "dirty Mexican" Were some of the things they yelled at this 14 year old boy. He was defending immigrants at a rally and was shouted down.

Spread this far and wide this woman needs to be put on blast. 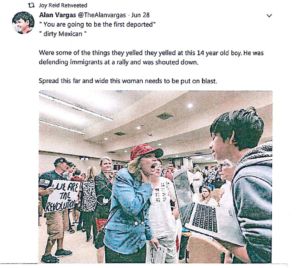 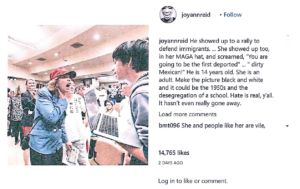 It says:joyannreid He showed up to a rally to defend immigrants. ... She showed up too, in her MAGA hat, and screamed, "You are going to be the first deported" ... "dirty Mexican!" He is 14 years old. She is an adult. Make the picture black and white and it could be the 1950s and the desegregation of a school. Hate is real, y'all. It hasn't even really gone away. 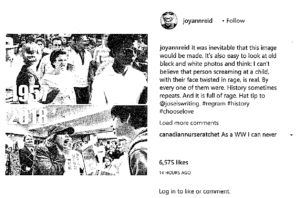 It says:joyannreid It was inevitable that this image would be made. It's also easy to look at old black and white photos and think: I can't believe that person screaming at a child, with their face twisted in rage, is real. By every one of them were. History sometimes repeats. And it is full of rage. Hat tip to @josieiswriting. #regram #history #chooselove

In September 2018, La Liberte sued Reid for defamation. La Liberte argued that she was polite to the young man and did not use the abusive language attributed to her in the original tweet, which Reid re-tweeted and included in her first Instagram post. La Liberte conceded that, after other news outlets had reported the encounter, Reid had promptly published an apology and a retraction stating, "It looks like I got this wrong."

A year later, a district court in New York dismissed La Liberte's case outright. While Reid ultimately prevailed, the case highlights the risk of defamation claims from social media use.

First, Reid's re-tweet was poised to answer whether Section 230 of the Communications Decency Act, which provides that "[n]o provider or user of an interactive computer service shall be treated as the publisher or speaker of any information provided by another information provider," also shields a Twitter user who simply re-tweets an allegedly defamatory tweet. Does re-tweeting constitute an actionable republishing of a defamatory statement? If so, who exactly qualifies as a "user of an interactive computer service"? Would a re-tweeter qualify?

While arguments have been made that the CDA safe harbor protects re-tweeters, contrary arguments have also be made. The text of the CDA would suggest that a re-tweeter is a "user of an interactive computer service," but no court has yet answered this question. Ultimately, the court in the Reid matter was not forced to answer the question either. La Liberte dropped her re-tweet claims and focused solely on the Instagram posts.

With respect to the Instagram posts, the court was clear. The CDA safe harbor does not apply. The court noted that Section 230's grant of immunity applies only if the provider or user is not also an "information content provider" of the content that gives rise to the underlying claim. "Information content provider" is defined to include "any person or entity that is responsible, in whole or in part, for the creation or development of information provided through the Internet or any other interactive computer service." Unlike the situation regarding the re-tweet, Reid was the alleged author of the text accompanying the Instagram posts. Thus, Reid could not obtain dismissal under the CDA safe harbor.

Ultimately, Reid was able to obtain dismissal for failure to state a defamation claim. La Liberte could not show actual malice, which requires a showing that the alleged defamatory statements were made with the knowledge of their falsity or with reckless disregard of their truth or falsity.

The court's application of the actual malice standard depended on whether it found that La Liberte qualified as a limited public figure. The court found the encounter took place at a meeting to discuss California Senate Bill 54, which would limit cooperation between state and local law enforcement and federal immigration authorities. Noting that La Liberte had attended and spoken about the bill at multiple city council meetings around the State of California and, a month prior to the encounter, had appeared in a photograph in the Washington Post included in a story about the controversy, the court found that La Liberte was a limited public figure. The actual malice standard therefore applied.

Finally, the court found that Reid was entitled to her attorney's fees and costs under the California Anti-SLAPP statute because the Instagram posts were composed in connection with an issue of public interest, and the posts were not defamatory.

La Liberte has appealed the decision. Reid has asked the court to award her over $150,000 in fees and costs.

Although Reid ultimately prevailed in this case, the opinion shouldn't embolden Twitter users, who should always exercise care when using social media. Even if U.S. law does someday clearly establish that the CDA safe harbor applies to re-tweets, the Internet has no borders, and courts outside of the United States have held that re-tweets can be grounds for a defamation claim.