For the past two weeks, we've been digging deeper on the Supreme Court's caseload, dividing the cases by area of law into sub-areas. This week, we're looking at the Court's docket of civil constitutional law cases – what kinds of cases make it to the Supreme Court? We'll divide the cases into four categories: cases involving the actions of state government; cases involving the actions of local governments; cases involving court process and procedure; and individual rights. Once again, the height of a bar on the chart signifies the total number of civil constitutional law cases for the year. The height of each colored ban in the bar signifies the number of cases involving that issue.

Between 1990 and 2004, the Supreme Court decided 107 civil constitutional law cases. Sixty-nine cases involved challenges to the actions of state government. Twenty-seven cases involved court process and procedure. Only eight involved questions of individual rights, and three involved challenges to the actions of local governments. The state government cases were predominantly in the first half of this fifteen-year period, between 1990 and 1997. Civil procedure, on the other hand, was a bit more common between 1998 and 2004. 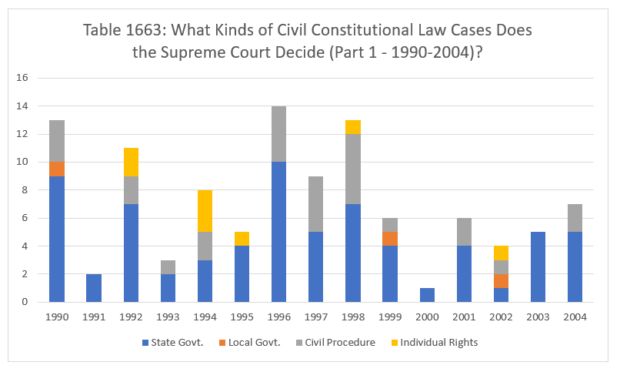 Join us back here tomorrow as we complete our review of the Court's civil constitutional law cases.