United States: A DAO Is No Defense: CFTC Says Decentralization Does Not Immunize DeFi From Regulation

The Situation:Under the existing legal regimes, decentralized autonomous organizations ("DAO" or "DAOs") have been viewed as a way to hedge against regulatory action by way of a decentralized structure. The Commodity Futures Trading Commission's ("CFTC") recent and first attempt to impose liability on a DAO and its members disrupts that assumption and helps provide insight into the future of decentralized finance ("DeFi") in the United States.

The Result: The CFTC's recent Order found bZeroX, LLC and its two founders violated the Commodity Exchange Act ("CEA") by unlawfully engaging in activities that could lawfully be performed only by a registered futures commission merchant ("FCM") or designated contract market ("DCM"), and contended that individual DAO members that voted on governance measures are jointly and severally liable for debts of the DAO as an unincorporated association.

Looking Ahead: The CFTC's complaint against Ooki DAO (the successor to bZeroX's DAO that operated the same software protocol as bZeroX) charged the same violations that the CFTC found in the Order. Even if the federal court does not adopt the CFTC's "unincorporated association" theory of liability for DAO voters, its very prospect seems likely to chill DeFi participation in the United States in the near future.

On September 22, 2022, the CFTC filed an Order announcing it had reached a settlement with bZeroX, LLC and its two founders, Kyle Kistner and Tom Bean (collectively, "Respondents"). The settlement relied in part on imposing controlling person liability on the founders, under Section 13(b) of the CEA, for bZeroX's violations of CEA Sections 4(a) and 4(d)(1). The Order found that the Respondents violated the CEA by operating an Ethereum-based DeFi platform ("bZx Protocol") that accepted orders and facilitated tokenized leveraged retail trading of virtual currencies such as ETH, DAI, and others.

According to the Order, the bZx Protocol permitted users to contribute margin to open leveraged positions, the ultimate value of which was determined by the price difference between two digital assets from the time the position was established to the time it was closed. In doing so, the CFTC found, the Respondents "unlawfully engaged in activities that could only lawfully be performed by a designated contract market ("DCM") and other activities that could only lawfully be performed by a registered futures commission merchant ("FCM")." The CFTC also found, by Respondents failing to conduct know-your-customer diligence on customers as part of a customer identification program, as required of both registered and unregistered FCMs, that the Respondents violated CFTC Regulation 42.2. Below is an illustration of how the bZx Protocol operated. 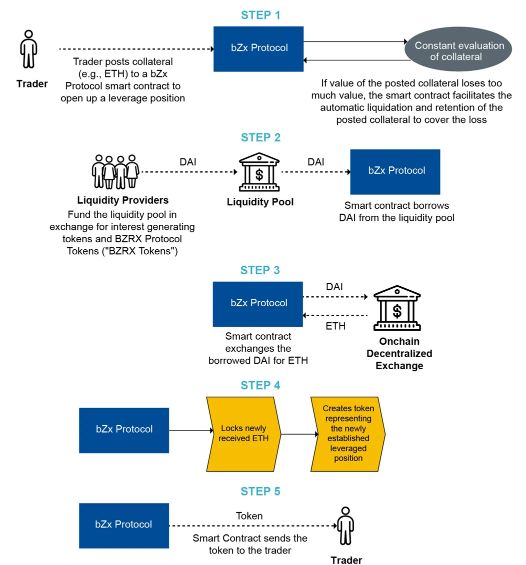 Concurrently with the Order, the CFTC filed a complaint against Ooki DAO, the successor to the bZx DAO-a DAO comprising bZx Protocol token holders that Respondents had transferred control to following a series of hacks in 2020 and early 2021. The Ooki DAO complaint charges the same violations in which the CFTC found in the Order that the Respondents had engaged. The CFTC characterized Ooki DAO in the Order as "an unincorporated association comprised of holders of Ooki DAO Tokens who vote those tokens to govern (e.g. to modify, operate, market, and take other actions with respect to) the [Ooki] Protocol." In the Order, the CFTC stated that "[i]ndividual members of an unincorporated association organized for profit are personally liable for the debts of the association under principles of partnership law."

As discussed in Commissioner Mersinger's dissent ("Mersinger's Dissent"), neither the CEA nor the CFTC have ever defined a DAO. More importantly, although the CFTC has to date settled one action against what it characterized as a DeFi trading platform (Blockratize, Inc. d/b/a Polymarkets.com), the Ooki DAO complaint is the first time it has attempted to impose liability on a DAO or its members. This was not entirely unexpected. For example, in footnote 63 in the CFTC's Digital Asset Actual Delivery Interpretive Guidance, the CFTC noted that "in the context of a 'decentralized' network or protocol, the Commission would apply this interpretation to any tokens on the protocol that are meant to serve as virtual currency as described herein" (emphasis added).

The CFTC added that "[i]n such instances, the Commission could, depending on the facts and circumstances, view 'offerors' as any persons presenting, soliciting, or otherwise facilitating 'retail commodity transactions,' including by way of a participation interest in a foundation, consensus, or other collective that controls operational decisions on the protocol, or any other persons with an ability to assert control over the protocol that offers "retail commodity transactions," as set forth in CEA section 2(c)(2)(D)."

Former CFTC Commissioner Berkovitz also stated in a 2021 speech that "[n]ot only do I think that unlicensed DeFi markets for derivative instruments are a bad idea, I also do not see how they are legal under the CEA." A few years prior to that, a CFTC spokesperson stated in response to questions about Augur-a DeFi prediction market offering, among other things, assassination contracts-that "[w]hile I won't comment on the business model of any specific company, I can say generally that offering or facilitating a product or activity by way of releasing c­­ode onto a blockchain does not absolve any entity or individual from complying with pertinent laws or CFTC regulations[.]" The CFTC's unincorporated association theory of liability is not unique: The SEC's 2017 DAO Report pointed out that Section 3(a)(1) of the Securities Exchange Act of 1934 defines an "exchange" as "any . association, or group of persons, whether incorporated or unincorporated.."

However, as noted in Mersinger's Dissent, "[d]efining the Ooki DAO unincorporated association as those who have voted their tokens inherently creates inequitable distinctions between token holders." For instance, a single vote on a generic governance proposal having nothing to do with the CEA or CFTC rules could unknowingly subject token holder A to membership in the unincorporated association, as defined by the CFTC, and assumption of personal liability, while token holder B escapes membership/liability by virtue of incidentally neglecting to vote. Even if token holder A had voted directly against the alleged unlawful actions, it could still face joint and several liability for the full legal claim against the DAO.

Moreover, as noted in Mersinger's Dissent, the CEA "sets out three legal theories that the Commission can rely upon to support charging a person for violations of the CEA or CFTC rules committed by another: (i) principal-agent liability; (ii) aiding-and-abetting liability; and (iii) control person liability." The CFTC has pursued the aiding-and-abetting theory in somewhat similar circumstances. In January 2018, the CFTC charged Jitesh Thakkarand Edge Financial Technologies, Inc.-a company Mr. Thakkar founded and for which he served as president-with aiding and abetting Navinder Sarao in engaging in a manipulative and deceptive scheme by designing software used by Mr. Sarao to spoof mini S&P futures contracts.

Mr. Thakkar was also named in a criminal complaint brought by the Department of Justice ("DOJ") related to the same conduct on charges of conspiracy to commit spoofing as well as aiding and abetting spoofing. The CFTC agreed to stay its case during the pendency of the criminal matter. After the DOJ's charges were dismissed with prejudice in April 2019, the CFTC resumed its civil action against Mr. Thakkar in September 2019. One year later, the CFTC ultimately entered into a consent order for permanent injunction with Mr. Thakkar's company, Edge Financial Technologies, Inc. The order included findings tracking the allegations in the CFTC's complaint, a permanent injunction against aiding-and-abetting violations of CEA Sections 4c(a)(5)(C) (spoofing) and 6(c)(1) (manipulation) and CFTC Regulation 180.1(a)(1) and (3) (relating to the use of a manipulative and deceptive device, scheme, or artifice to defraud), and an order of disgorgement and civil monetary penalty totaling $72,600.

While Commissioner Mersinger may have wished to hold only the founders liable for DAO-related activity, it would seem that the Commission is not so inclined and may wish to send a message to those who would trade on unlawful venues, even though the Commission usually seeks to protect such persons against misconduct arising from trading on such venues. In the case of DAOs, the Commission may take the view that such persons operate and control the venues, in some ways.

Even if this "unincorporated association" theory of DAO liability is not ultimately endorsed by a federal court, this ruling will likely result in protocol founders increasingly choosing to maintain anonymity and/or operate offshore. This could result in decreased availability of DeFi derivatives trading to U.S. persons and, if DeFi derivatives trading remains available to U.S. persons from offshore, greater extraterritorial enforcement efforts by the CFTC.

More broadly, this action is a warning that some regulators view unregulated DeFi trading activity as incompatible with existing legal structures, notwithstanding the argument that DAO token holders are engaged in active management of the protocol and so are not dependent on the efforts of others under SEC v. Howey Co. Footnote 10 of the bZeroX Order sounds loud and clear on this point, warning that "[i]t was (and remains) Respondents' responsibility to avoid unlawfully engaging in activities that could only be performed by registered entities and, should they ever wish to register, to structure their business in a manner that is consistent with Commission registration requirements" (emphasis added).

Incidentally, the message in that footnote is the answer to questions raised by some as to how crypto businesses are to operate when their very structures seem incompatible with existing regulatory schemes. More recently, SEC Chairman Gensler expressed a similar sentiment, stating that "[t]he commingling of the various functions within crypto intermediaries creates inherent conflicts of interest and risks for investors. Thus, I've asked staff to work with intermediaries to ensure they register each of their functions- exchange, broker-dealer, custodial functions, and the like-which could result in disaggregating their functions into separate legal entities to mitigate conflicts of interest and enhance investor protection" (emphasis added).

DAOs possess many novel qualities not present in traditional corporate structures-transitory ownership tied to a tradeable token, user ownership and governance, and operations conducted by, in some cases, an autonomous smart contract code. While encompassing only active voters in the instant case, the CFTC's language in its complaint against Ooki DAO seems to suggest that a smart contract protocol running programs deemed to violate regulations could continuously generate liability for DAO members simply by way of the members having "permitted" transactions executed by such programs. The greater the autonomy and automation of the smart contract underlying the protocol, the less sense attaching joint and several liability to DAO members arguably makes. Automating protocol functions to reduce the necessity of DAO member input is another foreseeable result of the CFTC's position.

While the potential for DAOs to avoid classification of their tokens as securities has reinforced the use of a fully decentralized structure lacking legal form, the countervailing risk of a general partnership-and especially voting member liability as an "unincorporated association"-will likely lead to increased use of traditional legal entities in DAO formation and governance for the DAO and individual participants alike. For all of the innovation the unique traits of a DAO allows, it is becoming increasingly clear that existing regulations will demand the rails of legal personhood to achieve compliance.

Whether a "test case" ramping up to something larger or simply a reminder to founders-or those who otherwise seek to legally or practically distance themselves from the DAOs that they create (e.g., by the developers "giv[i]n[g] up ownership over the 'escape hatch' function, which would allow a designated party to shut the system down[]")-that DAOs cannot be used as a tool to evade regulatory action, the outcome of the CFTC's lawsuit against Ooki DAO is one to closely watch as a harbinger for DeFi as a whole. User ownership and voted token participation in DAOs-while not the regulatory shield some might wish it to be-is an idea unlikely to go away anytime soon.