The Board affirmed two refusals to register each of the word+design marks shown below, for "utility knives," finding that the marks create a false association with President Trump under Section 2(a), and further finding that because President Trump did not consent to use of his name, the marks also violated Section 2(c). The Board pointed out that it has no authority to rule on the constitutionality of the Trademark Act, but it considered and rejected applicant's claim that Sections 2(a) and 2(c) are unconstitutional. In re ADCO Industries – Technologies, L.P., Serial Nos. 87545258 and 87545533 (February 12, 2020) [precedential] (Opinion by Judge Marc A. Bergsman). 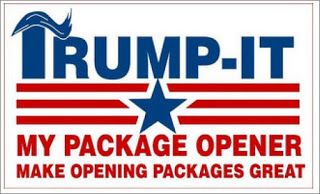 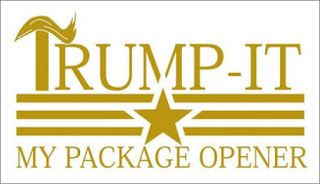 Rule 2.61(b) Requirement: The Board reversed a refusal based on applicant's non-responsive response to a Rule 2.61(b) request for information regarding the relationship, if any, between Applicant and President Trump. Instead, the Board chose to presume from the evasive response that there was no such relationship.

Section 2(a) False Association: In addition to protection of consumers, Section 2(a) is intended to protect a person from losing the right to control his or her identity. The evidence submitted by Examining Attorney Amy L. Kertgate established that "Donald Trump, the President of the United States, is a well-known figure," and therefore his identity "is an interest that Section 2(a) of the Trademark Act is design to protect."

The fact that Donald Trump has never used the term "Trump-It" as his name or identity does not obviate the false suggestion of a connection refusal. A term may be considered the identity of a person even if the person has not used the term. All that is required is that the mark sought to be registered clearly identifies a person (in this case, Donald Trump).

The marks at issue here include design elements that call to mind Donald Trump: both marks display his renowned hair wave and one mark includes a play on Trump's campaign slogan "Make America Great Again." Moreover, Trump's companies use the name "Trump" as a trademark for a wide variety of goods and services. He licenses rights to the name and the Trump name appears on buildings that he and his companies own.

The Board found that applicant's marks are a close approximation of Donald Trump's name or identity "because the marks' design elements and wording evoke Donald Trump." As further, albeit unnecessary, support for this conclusion was the fact Donald Trump is associated with numerous goods and services.

In light of the variety of goods that are sold under the Trump name, the Board concluded that "consumers encountering utility knives bearing Applicant's mark, shown below, will perceive Applicant's utility knives to be just one more product for which Donald Trump has licensed the use of his name."

Section 2(c): In pertinent part, Section 2(c) bars registration of a mark that "[c]onsists of or comprises a name, portrait, or signature identifying a particular living individual except by his written consent." Whether consent  is required depends on "whether the public would recognize and understand the mark as identifying a particular living individual." A "name" does not have to be a full name, but can be a first name, surname, shortened name, pseudonym, stage name, title, or nickname.

While with lesser-known figures there may have to be evidence showing that the consuming public connects them with the manufacturing or marketing of the goods at issue, well-known individuals such as celebrities and world-famous political figures are entitled to the protection of Section 2(c) without having to evidence a connection with the involved goods or services.

As applicant admits, Donald Trump is a well-known political figure and a celebrity. Therefore the Board found that because Applicant's marks include Donald Trump's name and likeness, his consent to register was required. And so the Board affirmed the Section 2(c) refusal.

Constitutional Issues: Although The Board has no power to strike down a statutory provision as unconstitutional, recent case law suggests that it may address constitutional issues. In fact, parties are required to raise constitutional issue if the issues are to be preserved for appeal. See In re DBC, 545 F.3d 1373, 89 USPQ2d 1123, 1127-28 (Fed. Cir. 2008) (requiring a party to raise a constitutional challenge to the agency "gives [the] agency an opportunity to correct its own mistakes ... before it is haled into federal court," and "it promotes judicial efficiency, as '[c]laims generally can be resolved much more quickly and economically in proceedings before [the] agency than in litigation in federal court'")

Here, applicant claimed that refusal of a registration based on Section 2(a) false association and on Section 2(c) constitutes an impermissible restriction of the right to freedom of speech protected under the First Amendment. The Board disagreed.

Section 2 does not prevent an applicant from using any slogan it chooses on its merchandise or in its advertising. It provides only that the mark itself must meet certain criteria in order to be registrable. Moreover,,even if considered a restriction on speech, the "false association" provision withstands constitutional review because (unlike the restrictions in Tam and Brunetti) it furthers the goal of prevention of consumer deception in source-identifiers and is well within Congressional authority.

Likewise, Section 2(c) protects consumers against source deception. "Such a prohibition, not on use, but only on registration, is comfortably within Congress's authority to protect the public against misleading or deceptive source-identifiers, and thus stands outside the speech rights protected by the First Amendment."

And so the Board upheld the Section 2(a) and Section 2(c) refusals to register.