In 2016, the EPO granted almost 96,000 patents, an increase of about 40% over the previous year. Although they received nearly 160,000 applications in the same period, ony half of all applications filed proceed to grant, so we can expect about half (80,000) of the year's input to proceed to grant. By this measure, the EPO is granting patents faster than it is receiving allowable patent applications, thus reducing its examination backlog. Indeed, this is the first indication of a reduction in the backlog since 2008, when the office stopped reporting on the size or duration of its backlog.1 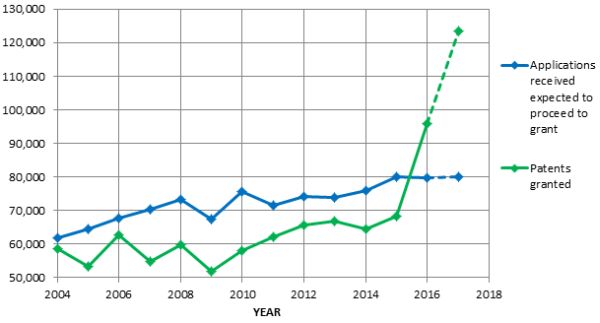 (The projection to the end of 2017 is based on our experience at Maucher Jenkins for the year 2017 to date.)

In 2008, the EPO had a backlog of patent applications just shy of half a million3. By 2009, the number had surpassed this milestone4 and was seemingly on an upward trajectory. Although the figure was omitted from the 2010 Annual Report and we are not aware of official figures since then, our graph indicates that the backlog has risen every year since and peaked at an estimated 580,000 in 2015.5

The EPO 2016 Quality report says the median search time has been reduced to 5.1 months and the median examination pendency has been reduced to 23.3 months. When other dead times are added in (times that are largely within the control of the applicant, not the EPO), the total time to grant (median) is probably down from the last reported average time taken to grant, which was 43 months reported in 2008.6

The stated EPO objective for examination is to progressively reduce the total time for an examination procedure, from receipt of a request for examination to the announcement of the intention to grant a patent under Rule 71(3) EPC, to 12 months on average by 2020.

Reducing the median examination pendency to 23.3 months is a "first step" (in the words of the 2016 Quality Report).

Our Handong Ran met with EPO President Benoit Battistelli at a breakfast in Beijing on 23 November ahead of Mr. Battistelli's meeting with SIPO Commissioner Shen Changyu. Mr Battistelli emphasized that the first priority in the patent granting process remains "delivering high quality/legally solid patents". Handong Ran asked for reassurance to applicants that pressure on reducing examination time on more difficult cases will not merely lead to curtailed discussion and more need for appeals. Mr Battistelli commented that applicants should still have adequate opportunities to be heard but advises applicants not to waste opportunities presented by the established procedure. He said "12 months should be adequate in general" and on specific cases it should be possible to extend the examination period up to 36 months and still meet the Paris criteria.

Mr Battistelli prioritises the planned introduction of "User Driven Early Certainty" under which applicants can delay examination upon request. This proposal is receiving criticism from the EPI and other quarters as not being in the interests of third parties. Mr Battistelli commented that early certainty is "not only certainty for applicants" but is also "certainty for the public". This may be true for the "early certainty from search" initiative, but is a statement that is not easy to reconcile with the notion that users will be able to choose to delay examination.

Subsequent to that breakfast meeting, Mr Battistelli went on to meet with SIPO Commissioner Shen Changyu. They concluded a new open-ended agreement between their respective offices for co-operation in areas such as laws and policies, the patent granting process, user services and training.

5) There are a number assumptions associated with our estimate, such as a steady state input and a steady 50% rate of allowance. This "allowance rate" does not mean that 50% are rejected. Many applications are abandoned after the search and many more before final rejection.

6) Of course, a population skewed to shorter times but having long tail will have a shorter median than mean, so we are not comparing like with like.

ARTICLE TAGS
UK Intellectual Property Patent
POPULAR ARTICLES ON: Intellectual Property from European Union
The IP In NFTs – What Is Being Purchased?
Herbert Smith Freehills
As we reported in our first blog post in this series, non-fungible tokens (NFTs) are a new asset class that is being adopted eagerly across all sectors...
By Design: Where To File First?
Haseltine Lake Kempner LLP
When applying to register a design, most applicants will eventually want to secure protection in many places around the world. However, it is typical to begin with a single application in one country or region, ...
European Software Patentability: The Big Split
Kilburn & Strode
The long and winding code – a short history of European software patentability through the lens of pop culture
Protection For Plant Varieties In Europe And The UK Post-Brexit
Dehns
The International Union for the Protection of New Varieties of Plants (UPOV) functions to "provide and promote an effective system of plant variety protection...
French Supreme Court Says Cross-border Patent Infringement Claims May Be Possible
Herbert Smith Freehills
The French Supreme Court issued a decision quashing a Paris Court of Appeal decision and thereby opening the door to the jurisdiction on the merits of French courts to rule on cross-border...
Patenting DLT Innovations In Europe
Marks & Clerk
In Europe, inventions that utilise distributed ledger technology will generally fall under the heading of "computer-implemented inventions (CIIs).
FREE News Alerts
Sign Up for our free News Alerts - All the latest articles on your chosen topics condensed into a free bi-weekly email.
Register For News Alerts
Article Tags
UK Intellectual Property Patent
Similar Articles
Powered by mondaq AI
MATCH
46%
Facts And Figures: Patents, Trade Marks, Designs And Hearings: 2021 Haseltine Lake Kempner LLP
51%
Ten Facts About A European Patent Haseltine Lake Kempner LLP
50%
UK Patent Rules Updates – October 2016 And April 2017 Marks & Clerk
48%
Stephen Blake Examines New Proposals From The EPO On Deferral Of Examination Marks & Clerk
48%
Changing The Rate Of Progress Of Your European Patent Application Or Appeal Marks & Clerk
Related Articles
The New Standard For Sequence Listings Keltie LLP
Deeds Not Words Marks & Clerk
European Software Patentability: Cheating Your Way To The Finish Line Kilburn & Strode
Mintel Sustainability Barometer Cipher
Can '#zombiebrands' Come Back To Life? Why Do Such Brands Cause Problems For #trademarklaw? Find Out This And More On HGF Ltd
Mondaq Webinars
Litigation Funding in Canada
Nomos Capital Corp.
Private Wealth - Getting it Right: Trusts, Foundations and Funds
Dixcart Group Limited
More Webinars
Comparative Guides
Anti-Corruption & Bribery
Artificial Intelligence
Banking Regulation
Blockchain
Cartels
More Guides
Mondaq Advice Centres
UK
Coming to and Investing in the UK
Global
Trademarks in SAARC Countries
More MACs