After economic activities started to warm up around the world following the over stability during the Covid-19 pandemic and the war between Russia and Ukraine, the demand for energy and electricity increased while prices went up. Hence, the need to amend current regulations governing the Turkish electricity generation market became the main topic of the conversation1. One of the most important advancements of recent times regarding this issue has been the amendment of the Regulation on Unlicensed Electricity Generation in the Electricity Market (the "Regulation").

Exemptions from the Licence Requirement and Establishment of Company

Although electricity generation requires a license from EMRA and only limited liability companies and joint stock companies are allowed in Turkey, the legislature has introduced some exceptions to encourage energy production from specific sources. The main aims of such legislation are (i) meeting the electricity needs of consumers from the generation facilities closest to the consumption point, (ii) effective use of small-scale generation facilities and ensuring supply security, and (iii) reducing the amount of losses in the electricity network2.

In terms of unlicensed electricity generation, the Act was amended in March 2022. However, with the most recent amendment, the relevant provisions in the regulation were also changed to create consistency. The Act and the Regulation both provide numerus clausus exemptions from the obligation to obtain a license for certain generation facilities, which are as follows:

What are the Changes That Came with the Recent Amendment? 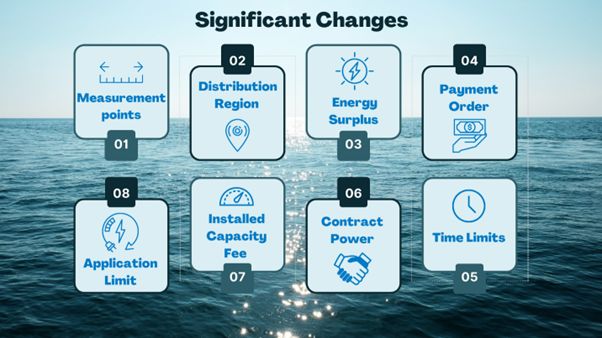 According to the press release on EMRA's official website, its primary goal is to enable all consumers to generate the energy they "consume" from the sun. EMRA states that the recent amendment will relieve consumers who have significant consumption but cannot establish a generation facility due to capacity constraints and space problems3.

Allegedly, there were also other motivations for the recent amendment; according to EMRA's recent press release, efforts to abuse the legislation have created the need for a new regulation that covers shifted amounts of electricity that can be sold4. With this regulation, EMRA determined the amount of generation that can be put up for sale for facilities that deviate from the goal of generation as much as consumption, increase the installed capacity disproportionately, eliminate the possibility of real consumers establishing unlicensed production facilities, and try to produce without consumption5.

Abolition of the Requirement to Be in the Same Distribution Region

We believe this particular change will positively impact the market because consumption generation matching is a matter that the conciliation of the market operator can resolve. We also find it positive to unleash the generation potential to the fullest. On the other hand, considering that one of the main aims of the Regulation is to consume electricity where it is generated and thus facilitate grid management, we believe that this change contradicts the aim.

According to the new amendment, with the exemption of dwellings that generate under 50 KWh, it has been decided that the amount of generation that can be put up for sale above the needs of the persons entitled to receive the call letter cannot exceed the total consumption of the related consumption facility as a result of applications made after 12.05.2019. For example, a person who consumed 1,000 MW of electricity in the previous year will be able to sell a maximum of 1,000 MW of energy following the monthly set-off in the current year. From the year's first month, payments will be made for surplus energy, and generation exceeding 1,000 MW will be reflected in the Renewable Energy Resources Support Mechanism ("YEKDEM") as a 'free contribution'.

The actual consumption amount will be calculated based on the one-way meter data that measures the generation within the facilities where generation and consumption are at the same measurement point so that no unjust treatment will be allowed. The system usage fee will not be accrued for the energy considered a free contribution to YEKDEM.

However, due to the retrospective nature of this amendment, the provision is found to be controversial by the market actors. The current provision consists of the applications made after 12.05.2019. However, hundreds of unlicensed investments have been commissioned within the framework of the repealed provision. While making these investments, financial leverage has been used rather than equity.

In accordance with the criticisms, we would like to emphasize that such discrepancy and retrospectivity not only contradicts the vested right principle of administrative law but also violates the rule of law principle protected under the constitution. In addition, such provisions increase regulatory risks and lower the possibility of new investments. Therefore, it is not surprising that this recent comprehensive amendment of the Regulation has been met with backlash from market actors such as vendors and EPC contratctors, and those who set up unlicensed power plants to generate electricity beyond their consumption after 2019.

In addition to the Regulation, the EMRA introduced a vital provision that was not present before. According to this clause, in case of underpayment by the market operator, the operator pays the relevant generators from oldest to newest, taking into account the invoice issuance date of the invoices issued by the generators. If there are invoices with the same date, these invoices are placed in the order of the lowest price to the highest price, and payments are made from the lowest to the highest. The reason for this provision is the problems in the balance of payments due to economic instability. Therefore, although we find such an amendment beneficial for overcoming the crisis, the important thing is to establish a system that will ensure that payments are made on time, and EMRA has this power.

Deadlines for the Completion of the Plant

One of the changes that came with the amendment provides different deadlines in the completion process of the plant of unlicensed electricity generation.

Previous to the amendment, the acceptance procedures of the generation facilities to be connected to the grid had to be completed within the following periods, starting from the signing date of the connection agreement, according to the point where the meter was installed:

From now on, within the date of signing the connection agreement, the amended deadlines are as follows:

There has been no change in the operation with this article7, and the expression "connected facilities from LV and facilities connected from MV" has been changed in the previous version of the regulation.

Within the scope of the new amendment, for calculating the contract power, a coefficient has been determined for customers with private transformers according to whether they are single or double-term tariffs. This change is essential regarding overgeneration penalties determined depending on system usage or connection agreement. Before this change, the contract power in the connection agreement only specified the place of use and did not make any distinctions for customers with private transformers.

All generation facilities within the scope of the Regulation are exempted from the available capacity fee, regardless of their installed capacity. Before the Amendment Regulation, this exemption was granted to facilities with an installed capacity of up to 5 MW. We find this change to be a positive development since it lowers the market entry costs.

Limit for the Application of Exemption

Regarding exemption applications from the prohibition of association with consumption and over-consumption sales for generation facilities that are based on renewable energy sources and whose generation and consumption are connected at the same point, up to the contract power in the connection agreement of their consumption facility, it is deemed appropriate that the limit of 10 kW shall be raised to 25 kW.

As stated above, The Turkish energy sector has inevitably undergone a transformation period requiring progressive changes to fulfill the market's needs rising after the economic crisis, mostly due to Covid-19 Pandemic, Russian-Ukrainian War, and exchange rates. The background for the immediate need for regulations is the pressure on the regulatory authority caused by the cost on society due to increased electricity prices.

Although several changes have been made with the recent amendment, the most remarkable part is the restriction on saleable electricity generation, not to mention the controversy which occurred because of the amendment's retrospective nature and the changes made on the consumption level. As we foresee, these issues will draw attention in terms of legal certainty, which is a key factor in the eyes of investors.

On the other hand, there are positive aspects as well; abolition of the requirement for Consumption Related Renewable Energy Facilities to be established at the same measurement point and repeal of the requirement to be in the same distribution region are progressive developments that we predict to be enhancing to the production potential. Disregarding the installed capacity fee could also be considered a development since it lowers the market entry costs. Lastly, amending the payment order for surplus energy is considered beneficial in times of financial crisis. However, developing a permanent system to ensure timely payments would be preferable. We will closely monitor and keep you informed about how these changes in the Regulation lead to implementation in practice.