Mining rights (i.e. exploration and operation licenses) cannot be divided into smaller shares and transferred to third parties since there is an accepted public interest in the rational and economic operation of license fields in their entirety. However, the players in the mining sector require funding and the prohibition of division of mining rights creates an important obstacle. Therefore, the sector players utilize royalty agreements as funding tools, whereby a license holder transfers its operating right to a third party in return for a royalty payment. In practice, royalty agreements are not the only tools for funding and other arrangements such as mining right transfers and pledge agreements are also utilized. However, it is safe to say that royalty agreements are used on a more frequent basis.

What is the legal nature of royalty agreements? 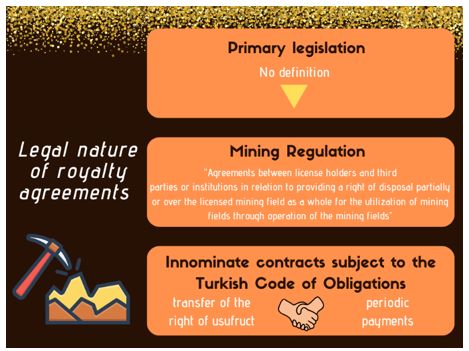 It is also argued that royalty agreements, as defined above, cannot be considered as permanent transfer agreements since the parties' intention is to grant the right to usufruct to the third party for a temporary period of time, regardless of whether the royalty agreement is executed for a definite or indefinite term2.

Are royalty agreements subject to any form or registration requirements?

There are several requirements which the parties are required to fulfil in order to execute a valid royalty agreement. Examples of obligations of the parties include:

As for the form requirement, neither the Mining Regulation nor the Turkish Code of Obligations require a specific form to be followed for royalty agreements (or usufructuary lease agreements). However, some argue that most mining fields are considered to be commercial enterprises and therefore royalty agreements must be executed in writing4. The parties may choose to execute the agreement in plain writing or conduct the required processes at the notary. Please note that execution of the royalty agreement before the notary will result in additional fees.

Royalty agreements are subject to the permission of the Ministry of Energy and Natural Resources ("MENR"). In case parties to the royalty agreement fail to obtain such permission and yet enter into a royalty agreement, their mining activities shall be terminated and administrative fines shall be imposed. Such agreements would also be deemed null and void. Additionally, the royalty agreements as well as any assignment or amendments to such agreements must be provided to General Directorate of Mining and Petroleum Affairs ("MAPEG") and recorded in the Mine Registry for information purposes. Please note that this disclosure obligation does not require MAPEG to become a party to the agreement; in fact under no circumstances should MAPEG be considered as a party to a royalty agreement. Such examination power granted to MAPEG is basically to investigate whether the third party, to whom the rights arising from the operating permit will be assigned, possesses the requirements stipulated by the legislation to engage in mining activities.

Once MAPEG reviews the submitted royalty agreement, the agreement is registered to the mine registry. Although the case law in relation to the effect of the registration is not fully established, we understand that the recent tendency of the high courts is to accept that the royalty agreement would become binding on third parties following its registration since it becomes publicly available information5. Therefore, should a license be transferred to another party, the new license holder would also be bound by the existing royalty agreement.

What are the rights and obligations attached to royalty agreements? 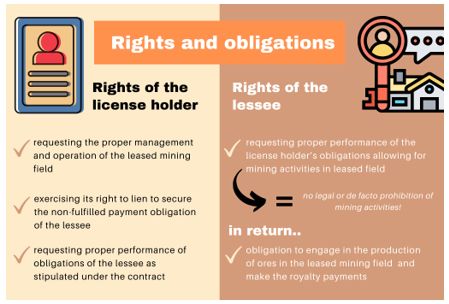 Needless to say, royalty agreements also carry primary and secondary rights and obligations assigned to its parties. In this regard, procurement of the relevant mining field in a manner that allows for proper operation and payment of the royalty fee are the primary obligations of the parties that constitute the essence of the agreement. Although the primary obligation of the license holder is rather straightforward, the royalty fee payment schedule may vary in practice. A royalty fee is a payment made to license holders in return for the transfer of the operation rights of a mine.

Accordingly, the calculation of this royalty fee may vary. For instance, parties may agree on a one-time advance payment for the transfer of operation rights of a mine. Examples of more common practices include periodic payments that are dependent on the production from the mining field. In case the royalty fee is calculated based on production, the payment may be determined based on each unit of production and paid at an increasing, decreasing or fixed percentage. As a general practice, parties also include a specific payment clause, protecting the license holder in cases where the production level realized in the contract period falls short of the commitment made by the lessee. In short, royalty fee arrangements may vary based on the needs of the parties and the status of the mining field subject to the agreement.

Intrinsically, the license holder, as the primary right holder, has the following rights:

However, in order to claim such performance, the license holder is obliged to deliver the relevant licensed mining field to the lessee in a manner that allows for the proper operation of the field (i.e. providing adequate and operational mining equipment). On a separate note, although the field would be operated by the lessee, the license holder will still be liable before the administrative authorities for obligations arising from its title, such as the reporting and payment requirements as stipulated under the mining legislation.

On the other hand, the lessee may request the proper performance of the license holder's obligations to be able to engage in mining activities in the leased field without any legal or de facto prohibition. In return, the primary obligation of the lessee is to engage in the production of ores in the leased mining field and consequently make the royalty payments to the license holder as stipulated under the contract. Such payment may be determined at a fixed monetary rate or calculated based on the extracted ores. In practice, it is observed that parties either request a fixed fee per each ton of production or a portion of the sales value of the produced ores. If the royalty payments are not determined in the royalty agreement, the contract is deemed to be null and void. Moreover, the lessee is also responsible for operating the mining field in a proper manner with due care and taking the relevant precautionary measures. There are also other requirements such as abiding by the occupational health and safety rules arising from the employer status of the lessee.

How do royalty agreements come to an end?

Please note that if the royalty agreements do not possess valid conditions (i.e. parties not having the capacity to engage in mining activities, absence of a MENR permit etc.), the agreement will be considered null and void and therefore, non-existent. Considering this, the conditions set out above would not be applicable under such a scenario since the agreement has never been in effect.

Other agreements in the mining industry

The Mining Law and Mining Regulation allow exploration and operation license holders to pledge the ores extracted from the mine. License holders wishing to pledge the ores extracted must file a written request before MAPEG and the date, duration and degree of the pledge must be recorded in the Mine Registry. Pledged ores may not be sold for the duration of the pledge without the written consent of the pledgee. The scope of such pledge agreements is limited to the produced ores only and does not cover the mining licenses.

Transfer of mining rights is subject to the permit from the MENR. Until such a permit is obtained, the agreement would not be in effect and would actually be considered as a suspended agreement pending approval8. In case MENR rejects granting a permit, then the agreement will become null and void in its entirety.

3 Please note that as per Turkish legislation, the regulation applicable for the establishment of a Turkish entity with local and/or capital is the same. In this regard, a Turkish entity may easily be established by foreign shareholders with no additional obligations and/or requirements.