With the developments in technology and increase in number of internet users, the global e-commerce volume continues to expand rapidly. The steady rise of e-commerce is triggered by changes in consumers' habits and shopping trends. According to data provided by the research company eMarketer, the global B2C (i.e. Business to Consumer) e-commerce volume is expected to reach USD 1.5 trillion in 2015.

Turkey's recent economic growth provides a convenient environment for sectors to evolve, parallel with sector-based improvements around the globe. Approximately 12,000 e-commerce websites operate in Turkey1. Three main e-commerce players dominate the Turkish e-commerce market: (i) "pure players" aiming to create their own brands; (ii) private shopping clubs providing discounts or promotions and enabling their consumers to reach designed products; and (iii) platforms putting up products or services for sale with special discounts from time to time.

Four main advantages enable the Turkish e-commerce market to emerge: (i) use of credit cards; (ii) sound logistics infrastructure; (iii) high use of mobile internet; and (iv) social media. 56.8 million credit cards and 100.2 million bank cards are being used in Turkey, which carries Turkey to 2nd tier in Europe in the number of credit cards and to 1st tier in bank cards2. According to research conducted by the Turkish Interbank Card Center3 (BKM), online payments by credit cards exceeded TRY 34.6 billion in 2013. In addition, convenient and rapid logistics services increase the consumers' interest. Another instrument that supports the Turkish e-commerce market is the use of mobile devices. According to Soner Canko, general director of BKM, 6% of online shoppers used their mobile devices for online shopping in 2014, which takes Turkey to 3rd place in use of mobile devices. Increase in use of social media is another factor enabling Turkish e-commerce market to grow. Turkey ranked 7th among countries with the highest number of registered users on Facebook and 10th on Twitter4.

According to BKM, the e-commerce volume of transactions by card have been increasing every year, as shown below. However, these figures do not reflect wire transfers or cash payments at the door. 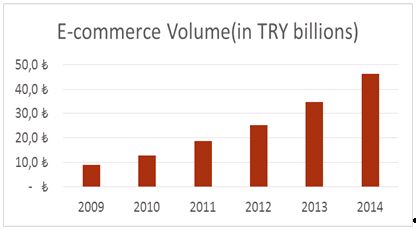 The potential in Turkey's e-commerce market has also attracted both foreign and local investors. The below table shows some of the investments made in e-commerce companies in recent years5: 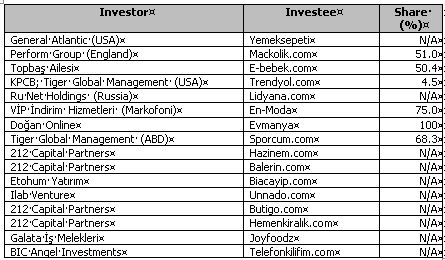 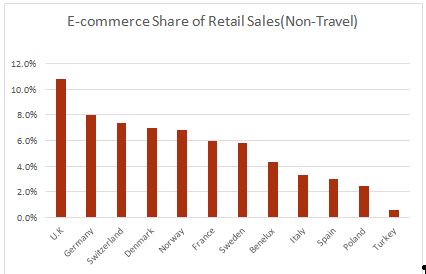 With its growing population and increasing number of internet users, Turkey offers retailers and entrepreneurs a promising future in the e-commerce sector.

I. THE EFFECT OF TURKEY'S INTERNET PENETRATION VOLUME TO THE E-COMMERCE SECTOR'S FUTURE

According to data of year 2013, of the 36 million, 10 million internet users also use e-commerce websites. This change in the commercial trends has resulted in a noticeable growth in Turkey's e-commerce market. According to Focus of Digital Market: E-Commerce (Dijital Pazarın Odak Noktası: E-Ticaret)8, published by the Turkish Industry and Business Association (TÜSİAD), the Turkish e-commerce market grew by 35.5% since 2008 and the market volume reached approximately TRY 14 billion in 2013. If Turkey manages to preserve this continuing rise, the e-commerce market is expected to grow by 15.8% at the end of 20179.

The most commonly used models in the e-commerce market are "B2C" and "C2C" (i.e. Consumer to Consumer). According to the Global and Turkish E-Commerce Market Report10, 70% of the total domestic internet economy is based on consumption. E-commerce websites such as Markafoni, Morhipo and Trendyol have particularly contributed to the increase of female online shoppers.

Turkish internet users are the youngest in Europe and this young group of internet users' interest in e-commerce results in a growth for B2C commerce. In 2012, the total disbursements in B2C model e-commerce operations reached TRY 15.3 billion, corresponding to 51% of the total online disbursements. Travelling and plane ticket purchases constitute 25% of total online shopping disbursements. This is followed by insurance, consumer products, telecommunication and direct marketing11. In 2013, sales in the B2C model increased by 40%12.

According to a survey conducted by the Turkish Statistics Institute13, the product group with the highest volume in online sales in 2012 was clothing and sports equipment, with a ratio of 44.4%. This group of products was followed by electronic devices, with a ratio of 25.5% and furniture with a ratio of 21.2%.

According to the report14 published by TÜSİAD, the "B2B" (i.e. Business to Business) model is not as commonly used in the Turkish e-commerce market as the C2C model. Although well-known companies, such as Migros and Hepsiburada are currently using the B2B model, the use of e-commerce is not common among small and medium sized enterprises. According to the report, the lack of (i) trust in e-commerce; (ii) labor force; (iii) financial resources; (iv) technical infrastructure; (v) know-how and (vi) high application expenses prevent B2B e-commerce from becoming widespread among small and medium sized enterprises. Although progress in the B2B market is slower than expected, according to the data provided by IDC Corporate15, the market grew by 28% within the last four years.

In order to create a legally sound environment, the Law on Electronic Commerce was finally published on 5 November 2014 in the Official Gazette (the "ECL"). Under the ECL, electronic commerce is defined as commercial activities conducted through electronic environment without parties coming face-to-face. The ECL aims to protect consumers and to encourage them to use e-commerce more frequently. The ECL will enter into force on 1 May 2015.

Another legislation that applies to e-commerce transactions is the Consumer Protection Law16 (the "CPL"). There is also the Distance Sale Agreements Regulation17 ("Regulation"), which was prepared in accordance with the CPL and will enter into force on 27 February 2015.

Under the CPL, in distance sale agreements, consumers have the right to withdraw from the agreement within 14 days, without presenting any reason and/or paying any penalty. Moreover, under the CPL, the seller or the provider must perform its duties agreed under an electronic agreement, within 30 days following receipt of the order. These consumer protections that the CPL and the Regulation bring along are expected to promote e-commerce in Turkey.

Statistics demonstrate that, with the legislative developments expected in the upcoming years (e.g. enactment of the Draft Law on Data Protection), Turkey's potential in e-commerce will keep increasing and Turkey will have a more sustainable environment for e-commerce investments. With more conscious e-commerce users, supportive market instruments, investments and regulations, Turkey will be able to maintain the increase in the domestic e-commerce sector and may become a noteworthy player in the global market.

7.Hana Ben-Shabat, Parvaneh Nilforoushan, Mike Moriarty, AT Kearney, E-Commerce Is the Next Frontier in Global Expansion, 2012.