Turkey: Enthusiasm Of Turkish Merger Control Regime To Catch The Joint Ventures Established Outside Of Turkey

The mandatory notification requirement for the joint ventures, which will be established outside of Turkey, under Turkish merger control regime has always been a recondite issue for both local and foreign companies. Particularly, if the joint venture is structured as an undertaking that will not have any commercial activities in Turkey, the question on whether such transaction is subject to mandatory merger control filing before the Turkish Competition Authority (the "Authority") boils down to the implementation of "effect theory".

In this respect, this article aims to provide an elaborative insight on when transactions concerning formation of joint venture would require to be notified before the Authority and what are the legal consequences of violation of suspension requirement within the meaning of Law No. 4054 on Protection of Competition ("Law No. 4054").

Under Communiqué No. 2010/4 on Mergers and Acquisitions Requiring the Approval of the Competition Board ("Communiqué No. 2010/4"), three cumulative conditions should be met in order for a transaction to be deemed as subject to mandatory merger control filing in Turkey:

(i) There should be a permanent change of control as a result of the transaction,

(ii) One of the alternate turnover thresholds set forth under Article 7 of Communiqué No. 2010/4 should be satisfied,

(iii) As per Article 5(3) of Communiqué No. 2010/4, joint ventures that permanently meet all functions of an independent economic entity (full-function) are deemed notifiable. In this respect, only full-function joint ventures constitute concentration subject to mandatory merger control filing before the Authority1. 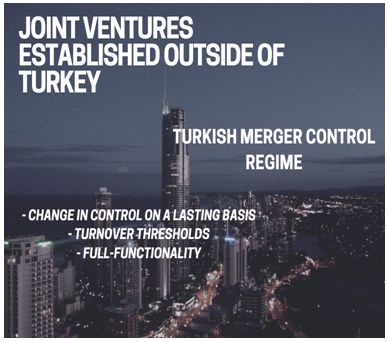 With regard to the first condition, according to Article 5(2) of Communiqué No. 2010/4, the term of "control" refers to the right conferring the opportunity to exercise decisive influence on strategic business decisions such as approval of annual budget, assignment of senior management, approval of annual business plans etc. Therefore, simple minority rights or other interests mainly aiming to protect the investments of shareholders do not grant control rights unless minority interests are granted with certain veto rights for the said strategic business decisions. To that end, in order for joint ventures to be deemed as concentration within the scope of Communiqué No. 2010/4, none of the control acquiring parties should be capable of either taking strategic business decisions without the consent of another parent company or creating a deadlock by using its veto rights.

The second condition consists of two different turnover thresholds for the purposes of notifiability analysis of the joint ventures under Article 7 of Communiqué No. 2010/4. In this respect, the transaction concerning the acquisition of joint control would require mandatory merger control filing if one of the following turnover thresholds are exceeded:

(ii) the Turkish turnover of the transferred assets or businesses2 in acquisitions3 exceeds TL 30 million and the worldwide turnover of at least one of the other parties to the transaction exceeds TL 500 million.

That being said, in terms of notifiability analysis for joint ventures that does not have any activities in Turkey, only the first turnover threshold would be applicable given that greenfield joint ventures does not generate any turnover prior to their incorporation.

In terms of calculation of the parent companies' turnover, it should be noted that the Turkish merger control regime does not require physical presence of parent companies through their subsidiaries or affiliated entities or branches incorporated in Turkey. Mere sales from abroad into the markets in Turkey would be sufficient to conclude that the parent companies are active in Turkey, and thus, they have generated Turkish turnover.

As stated above, only full-function joint ventures could be subject to mandatory merger control filing in Turkey (see footnote 2 for an exception of this rule). In this respect, the Guideline on Cases Considered as Mergers and Acquisitions and the Concept of Control provides the following criteria for determination of whether the joint venture is full-function:

(i) The joint venture should have sufficient resources to operate independently;

(ii) The activities of the joint venture should go beyond one specific function of its parent companies;

(iii) The joint venture should be independent from its parent companies in sale and purchase activities;

(iv) The joint venture should operate in the market on a lasting basis.

Turkish merger control regime does not treat the foreign-to-foreign transactions separately given that Article 2 of Law No. 4054 on Protection of Competition ("Law No. 4054") implies that even foreign-to-foreign transactions fall within the scope of Turkish merger control regime to  the extent that they affect any of the relevant markets within the borders of the Republic of Turkey. Therefore, even none of the parties has presence in Turkey but mere sales into Turkey, such transaction could require mandatory merger control filing to be submitted before the Authority.

Further, a transaction concerning formation of a joint venture would be notifiable given that the parent companies' turnover figures trigger the turnover thresholds even if the joint venture will not be active in Turkey.

Although there are some exceptional cases4 in which the Board concluded that the formation of a joint venture does not fall within the scope of Turkish merger control regime as the transaction does not give rise to any effects in the relevant markets in Turkey, the Board seems to be insistent to review the transactions satisfying the notifiability conditions stated above regardless of the country of incorporation of the joint ventures. 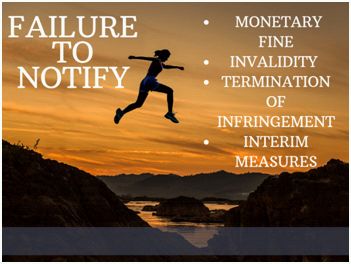 Accordingly, in terms of formation of joint ventures, which is deemed as an acquisition if the joint venture will permanently meet all functions of an independent economic entity, the administrative monetary fine for violation of suspension requirement would be levied on the control acquiring parties. In terms of mergers, both merging parties would bear the fine.

According to Article 11(1)(b) of Law No. 4054, if (i) a transaction subject to notification requirement in Turkey realized without or prior to the approval of the Board and (ii) such transaction is found by the Board as infringing Article 7 of Law No. 4054 (which prohibits the transactions creating or strengthening a dominant position, thereby significantly restricting competition in a relevant market), the Board will impose an administrative monetary fine up to 10% of the transaction parties' turnovers along with other legal sanctions.

Invalidity of the Transaction

Termination of Infringement and Interim Measures

According to Article 11(1)(b) of Law No. 4054, in case that the Board concludes after its review that the transaction violates Article 7 of Law No. 4054, the Board instructs the parties to abolish the transaction and extinguish all de facto legal consequences of every action that has been taken unlawfully. In other words, the parties must take all necessary actions to reverse the current de facto situation to the pre-transaction status. Such actions include return of all shares and assets acquired as a result of the transaction prohibited by the Board. If it is not possible to completely turn back to the status existed before the consummation of the transaction, the Board may instruct to take all necessary measures including the transfer of shares and assets to the third parties so that pre-transaction level of competition is protected. Meanwhile, the Board could also forbid participation of the parties in control until the assignments to restore the pre-transaction status are completed.

Moreover, if it is deemed necessary, the Board can take interim measures until the final resolution on the matter in cases where there is a possibility for serious and irreparable damages to occur.

When do the transactions establishing a greenfield joint venture5 realized/implemented under Turkish merger control regime?

As per Article 10(8) of Communiqué No. 2010/4, the implementation date of a transaction is the date on which "change of control" occurred. In this respect, determining when a transaction concerning acquisition of shares, rights, assets etc. is deemed "realized" or "implemented" under Turkish merger control regime is relatively straightforward. That being said, for greenfield joint ventures, it is more difficult to determine whether incorporation of a joint venture is sufficient to determine if suspension requirement is violated. Or is it necessary for a greenfield joint venture to commercially start operating in a relevant market in order to raise concerns for violation of suspension requirement?

That said, in its ATG8 decision, the Board took a different position by considering that mere incorporation of ATG cannot trigger violation of suspension requirement given that ATG would become a full-function joint venture only when the construction required to start operating has been completed, adequate personnel are employed and there is an office building. In this respect, it could be interpreted that the Board deemed the initiation of commercial activities as the actual implementation of the transaction subject to mandatory notification requirement in Turkey.

Taking into account the presence of different positions on this front, the safe approach would be to notify the transaction before the incorporation of the joint venture (de jure implementation).

As evident from the foregoing, formation of joint ventures, which will not be active in Turkey, could be subject to mandatory merger control filing in Turkey if the parent companies are currently active in Turkey. For such cases, it could be concluded that the presence and market activities of the parent companies, and accordingly their turnover generated in Turkey, trigger the notification requirement as it is presumed that the post-transaction situation could indirectly affect the structure of the relevant markets in Turkey and market powers of parent companies in those markets. Nonetheless, it is still understandable to question why notification is required for such joint ventures and the limits of the Board's approach towards the implementation of "effect theory" under Article 2 of Law No. 4054.

All in all, as indicated above, the monetary sanctions provided for violation of suspension requirement would be unexpectedly burdensome for companies. Moreover, this burden could be doubled with other administrative sanctions imposed by the Board. In this respect, we would like to highlight the fact that your joint venture to be established and operate activities outside of Turkey could require a notification before the Authority in Turkey regardless of the lack of affected markets or even potential activities in Turkey.

1 According to paragraph 78 of the Guidelines on Mergers and Acquisitions Requiring the Approval of the Board and the Concept of Control, acquisition of joint control over an undertaking would cause a structural change in the market even if the acquired undertaking will not be deemed as a full-function joint venture after the consummation of the transaction. In this respect, transactions concerning acquisition of joint control over an undertaking or a part of it by a couple of undertakings from third parties would be subject to mandatory merger control filing before the Turkish Competition Authority even if the joint venture will not be deemed as full-function, provided that the acquired undertaking or part of it has an attributable turnover.

2 In terms of mergers, the Turkish turnover of any of the parties should exceed TL 30 million in order for the merger transaction to trigger notification requirement in Turkey.

5 The term "greenfield joint venture" refers to a joint venture which does not have any activities prior to its incorporation.