According to Article 16 of Industrial Property Code ("IPC") numbered 6769, which was entered into force on January 10, 2017, when the Turkish Patent and Trademark Office ("Office") decides that an application has no formal deficiencies, it will examine the application in accordance with Article 5 of the IPC with the title, 'Absolute grounds for refusal in trademark registration'.

Below, Article 5 of the IPC that is related to the absolute grounds for refusal is reviewed in detail.

Therefore, for example, since it is not possible to represent smells and tastes on the register with today's technology, trademark application of those signs will be refused in accordance with Article 5/1-a of the IPC. The European Union Intellectual Property Office ("EUIPO") has a decision on record rejecting the trademark application for registration of an artificial strawberry flavor on the grounds that it is not capable of being represented in the register1.

According to Article 5/1-b of the IPC, 'Signs that are devoid of any distinctive character' shall not be registered as a trademark. For example, while 'Aroma' sign is not distinctive for coffees under Class 30, 'Fresh Sardines' sign is not distinctive for sardines under Class 29. Similarly, the European Court of Justice ("ECJ") has ruled in the Henkel Tablet decision that the washing tablet, as shown in the image, does not have a distinctive character in order to be registered as a trademark2.

However, as it is regulated under Article 5/2 of the IPC, if a trademark has been used prior to its application, and through this use has acquired a distinctive character in respect of the goods and services subject to the application, the registration of this trademark may not be refused based on its non-distinctive or descriptive character.

According to Article 5/1-c of the IPC, 'Signs that consist exclusively, or include as an essential element of signs or indications, which serve in trades to designate the kind, type, characteristics, quality, quantity, intended purpose, value, geographical origin, or the time of production of goods, or of rendering of the services, or other characteristics of goods or services,' shall not be registered as a trademark. For example 'BROWNIE' sign for nutrition goods under Classes 29 and 30, 'PLAY GROUND' sign for entertainment services under Class 41, and signs such as 'S, M, L' which show the sizes of the products for the goods under Class 25, will be found to be descriptive by the Office.

The Office defined the trademarks, below, as identical, or indistinguishably similar, within the scope of Article 5/1-ç of the IPC: 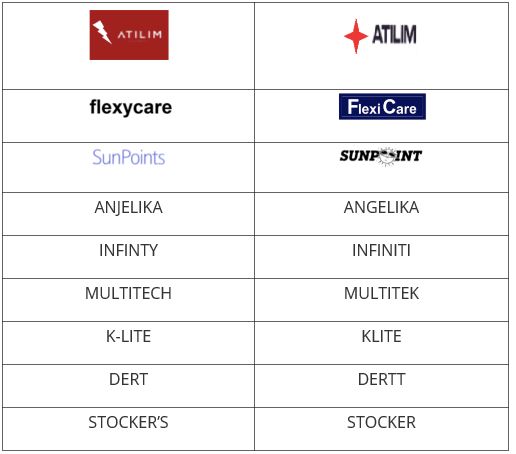 The Office stated that the trademarks, below, are not identical, nor indistinguishably similar, within the scope of Article 5/1-ç of the IPC: 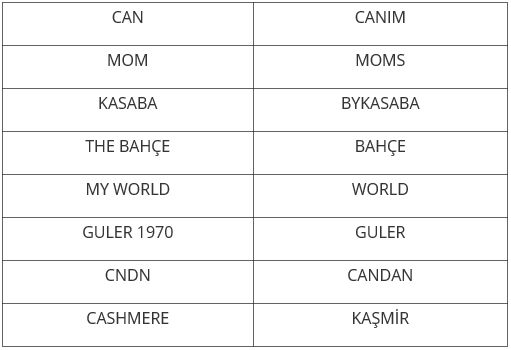 Article 5/3 of the IPC regulates that if a notarial document indicating the clear consent of the prior trademark proprietor for the registration of the application is submitted to the Office, then the trademark application will not be refused based on Article 5/1-ç of the IPC. While the consent document may be submitted at the time of the application, if there is opposition to the Office's decision, it may be submitted until a decision made concerning the opposition.

'Signs that consist exclusively, or include as an essential element of signs or indications used by everyone in the trade area, or which serves to distinguish members of a particular professional, vocational or commercial group from others' shall not be registered as a trademark according to Article 5/1-d of the IPC.

This article addresses the intention to prevent the creation of monopolies through the registration of a trademark that is commonly used in the field of trade in the name of only one undertaking and to protect the public interest. Through application of this sub-paragraph, it should be examined whether the trademark in question is used by different actors in the related sector.

For example, the Supreme Court stated that 'FLORİST' sign, which is intended to be registered for 'exhibitions and organizations in the field of garden culture, greenhouse and floriculture' services cannot be registered since it shows the type of service, and includes the name of the occupational group related to that service3. However, Article 5/2 of the IPC also covers this sub-paragraph and, if it is proven by the trademark applicant that the sign has gained distinctiveness through its use, it shall not be refused based on Article 5/1-d.

For example, as it is stated in the Guideline that since 'the shape of a banana' results from the nature of the good itself, it cannot be registered for bananas. Indeed, in the Philips v. Remington decision, the ECJ refused the registration of the shape mark for the three-headed rotary electric shaver since the shape is mandatory to obtain a technical result.4

Article 5/1-f of the IPC regulates that 'Signs that would deceive the public, for instance, as to the nature, quality or geographical origin of the goods or services' shall not be registered as trademarks. For example, the Supreme Court decided that 'MUSLIMEK' sign is deceptive since the goods do not include any muesli5.

According to Article 5/1-g of the IPC, 'Signs that shall be refused pursuant to Article 6ter of the Paris Convention' cannot be registered as trademarks. According to this provision, flags, pennants and similar sovereign marks belonging to the Union countries or logos, names and abbreviations of the international organizations to which the Union countries are members (such as WHO and UNICEF) cannot be registered as trademarks.

Article 5/1-ğ of the IPC is complementary to Article 5/1-g of the IPC and states that 'Signs other than those covered by Article 6ter of the Paris Convention, but which are of public interest, and that contain historical, cultural values, and emblems, badges or escutcheons, for which the consent of the competent authority has not been given' shall not be registered as trademarks.

In addition, while Article 5/1-h of the IPC regulates that 'Signs that contain religious values or symbols' (such as the Koran, Mosque, Jesus) cannot be registered as trademarks, Article 5/1-ı states that 'Signs that are contrary to public policy or to accepted principles of morality' shall not be registered as trademarks. Indeed, the EUIPO rejected the trademark application 'LA MAFIA' since it is contrary to public policy.