Norway: Trademarks In Telemark: Five Brands And Other Things To Look For At PTMG In Oslo

I am excited to be traveling to Norway next week to attend my first conference of the Pharmaceutical Trade Marks Group in Oslo. Not having been to PTMG before, I can't offer much insight on the conference, but since I lived in Oslo for a year many years ago, I do have a bit to say about the host city. In the spirit of a smorgasbord, here are five things I'm looking forward to about the trip, with a little Norwegian trademark trivia thrown in. 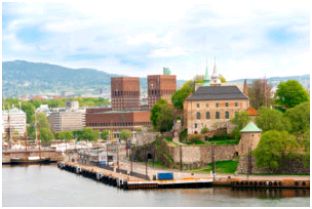 The ski jump at Holmenkollen, which overlooks Oslo from a ritzy hilltop neighborhood, offers stunning views over the city and the fjord. Jutting up from a mountainside and visible from miles around, it has always been a beacon of welcome whenever I approach Oslo by air or sea. There has been a ski jump at Holmenkollen since 1892, and it has been the site of an annual ski festival and competition since that time. However, since the last time I visited, the Holmenkollbakken I knew has been demolished (it was too small to host modern World Championship events) and replaced by a sleek new version, completed in 2010. The cantilevered design looks amazing in photos, and I can't wait to see it in person. I am glad to see that visitors are still allowed to ascend to the top of the jump tower for a panorama over the city and a dizzying view straight down the slope.

HOLMENKOLLEN was in fact registered as a trademark in the U.S. in the 1970s in connection with skis, ski poles, and ski boots. The brand was manufactured by the Åsnes Ski Factory in Norway for the U.S. market, but the mark is no longer in use, and the registration has expired.

If you find old skis intriguing, the Ski Museum at the base of the Holmenkollen ski jump, the world's oldest museum dedicated to skiing, is also worth a visit. Modern skiing was, of course, invented in Scandinavia, and exported from there around the world, including to the U.S. It turns out that a bit of history about the introduction of cross-country skiing to the States can be gleaned from a 1981 decision of the U.S. Trademark Trial and Appeal Board (TTAB) concerning the mark TRAK for cross-country skis and boots. According to the decision, the opposer, a cross-country ski company called Trak, was founded in 1970 by two former Procter & Gamble "marketing men" who had "learned from a Norwegian [Harvard Business School] classmate about the sport of cross-country skiing and the substantial interest expressed by New Englanders in his personal cross-country skiing activities." Apparently, this wacky Norwegian business student skiing around Cambridge, Massachusetts helped to inspire an entire new sport and industry in the northern U.S. 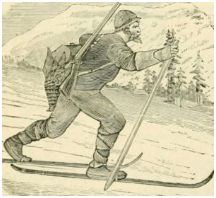 In the TTAB proceeding, Trak managed to successfully oppose another sporting-goods company's application to register TRAQ for racquetball rackets. Trak overcame the argument that TRAK was weak as applied to cross-country skis because it suggested the "tracks" in which skis glide over the snow. Trak appears to have been quite an innovative and brand-aware company. It also developed a successful fish-scale design for the bottom of its skis, which obviated the need to select and apply ski wax based on snow quality and temperature. The company then obtained trademark registrations for FISHSCALE and NOWAX (the latter based on Section 2(f) acquired distinctiveness) for skis. Trak merged with the Finnish sporting goods company Karhu in the late 1990s, and all of these registrations have lapsed.

One other note about skiing: I have to admit that the title of this piece is a bit misleading. PTMG will not actually be in Telemark, which is a county in southern Norway several hours from Oslo. But apart from the wordplay, the word "Telemark" may be familiar to some non-Norwegians as the term for a type of ski and binding in which the heel is not connected to the ski, allowing the skier to turn by bending the knees and raising the back heel in a lunge. It is apparently not familiar to the U.S. Patent and Trademark Office, however, which recently issued a Principal Register registration for TELEMARK TECH SYSTEM in connection with skis, ski bindings, and related gear, with a disclaimer of TECH SYSTEM but not of TELEMARK. It will be interesting to see whether the owner of this registration ever attempts to enforce it against the many other providers of telemark ski gear on the market.

Apart from skiing and oil, Norway's most famous export may well be fish. It's hard to beat fresh Norwegian seafood, and I am looking forward to Thursday's dinner at the maritime-themed restaurant D/S Louise in Aker Brygge. 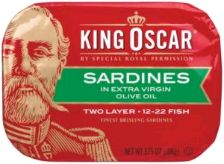 Indeed, an association with Norway lends a good deal of cachet to seafood products around the world, and has inspired some trademark wrangling here in the U.S. In 1939, a New York court decided the case of Chr. Bjelland & Co. v. Victor M. Calderon Co., in which the plaintiff, the distributor of canned sardines under the marks KING OSCAR and PRINCE OLAV, sought to enjoin defendant's use of the mark KING OLAV for competing canned sardines. The court rejected the plaintiff's claim to exclusive rights in the word KING for sardines, listing "twenty-one brands of sardines having the word 'King' as first or second word of the brand" and concluding that "the word 'King' and the word 'King' coupled with the name of a monarch, and the red and gold wrappings, . . . have come to identify, not the goods of plaintiffs, but Norwegian sardines generally." Despite this setback, Bjelland's successor continues to distribute KING OSCAR sardines worldwide in red and gold trade dress, and sets itself apart by claiming to have received "special royal permission" in 1902 from King Oscar of Norway and Sweden to use his name and likeness on packages of sardines. The defendant's KING OLAV brand does not appear to be on the U.S. market any longer.

The classic accompaniment to Norwegian meat and seafood is a little glass of aquavit, Norway's caraway-flavored cousin to vodka. Norway's most famous brand of aquavit is Linie, so called because it is matured at sea, in oak sherry casks that are sent on a ship around the world, crossing the Equator ("linie") twice. If you look through your bottle of Linie at the back of the label, you will see the name of the ship on which the aquavit you are drinking made its journey. 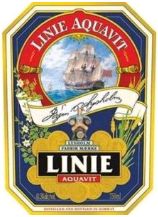 Linie has registered its intricate label with the U.S. Patent & Trademark office in connection with alcoholic beverages. The registration disclaims various words on the label, including FABRIK MARKKE (meaning "trademark") and AQUAVIT, which is descriptive of the goods. The PTO Examining Attorney also initially refused registration of the label under Section 2(b) of the Lanham Act because it contained a depiction of the Norwegian flag (flying from a ship). The Applicant argued against the refusal by pointing out that it owned a prior incontestable registration for the same label (in black and white) and by offering a charming little story about the history of the brand and the label:

The painting on the label depicts the sailing ship 'Trondheims Prøve,' the first ship that brought aquavit casks across the equator in 1805. Catharina M. Lysholm of Trondheim, Norway had the ship built, and it set out for East India in 1805 loaded with stockfish, ham, cheese and a cargo of five casks of Norwegian aquavit. The aquavit remained unsold, and back home in Trondheim in 1807 the casks of aquavit were sampled once again. It was then discovered that the sea travel had vastly improved the taste of the aquavit, thus the principle behind Linie Aquavit was established – namely, crossing the equator twice. This was the basis for the first modern aquavit, introduced by Ms. Lysholm's nephew Jørgen B. Lysholm (whose signature appears on the label) in 1821. The painting has been used on the labels since Mr. Lysholm's time, and the appearance of the flag is a natural element as the ship was Norwegian.

The Examining Attorney was unimpressed by this argument but ultimately allowed Linie to obtain its registration by submitting a substitute drawing in which the Norwegian flag was replaced by a plain red flag.

It turns out that AQUAVIT is not always disclaimed in trademark applications and registrations, because, of course, it is only descriptive as applied to alcohol. It has not been seen as descriptive as applied to, for example ... pharmaceuticals. Indeed, Aquavit Pharmaceuticals has had a couple of intent-to-use applications approved (including AQUAVIT PHARMACEUTICALS, INC. for "research and development in the pharmaceutical and biotechnology fields").

While I have not been able to confirm this fact, I have always heard that Oslo is the world's largest national capital in terms of land area. This is because it incorporates within city limits a huge forested refuge north of downtown known as Nordmarka. October is a lovely time of year for a hike in Nordmarka, and I hope to have time for a walk in the woods to pick some wild blueberries or perhaps even the more elusive cloudberries (a local favorite known to Norwegians as molte). A stop for coffee and waffles at Ullevålseter, originally the summer mountain pasture or "seter" of the historic Ullevål farm in Oslo, would cap off an idyllic afternoon. 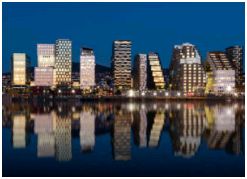 At the other extreme, Oslo encompasses some ultramodern architecture that has sprung up since I lived there. In addition to the new Holmenkollbakken, I am particularly excited to see the acclaimed Opera House, by the trendy Norwegian architectural firm Snøhetta, and the controversial "Barcode" complex of high-rises overlooking the fjord. Both of these are a short walk from the conference hotel and will be easy to visit during a break in the program.

It appears to be a very opportune time for PTMG to convene in Oslo, as the pharmaceutical industry in Norway is growing in size and importance. The American Chamber of Commerce in Norway recently released a report on The Impact of the Multinational Pharmaceutical Industry on Norway's Economy and Society, detailing the benefits that pharma companies are bringing to Norway in terms of health, innovation, employment, and economy. The report concludes by urging the Norwegian government and stakeholders to "actively promote the sector and reduce the barriers of doing business in the country." If these steps actually are carried out, we may see the presence and influence of the pharma industry in Norway continue to increase. I am looking forward to discussing these trends with fellow conference attendees, both from the local industry and from PTMG's multinational members in attendance.