South Africa: Sparkling Wine And A "Spade Of Inspiration"

We like to report on rulings of the South African Advertising Regulatory Board ("ARB") that are IP-related. Clause 8 of section II of the ARB's Code of Advertising Practice deals with the issue of the exploitation of another party's "advertising goodwill", whereas clause 9 of section II deals with imitation. The trade mark issue of a likelihood of consumer confusion naturally comes up in enquiries of this sort.

The matter is clearly one of considerable commercial significance. KWV, which launched its Annabelle Cuvee Rosé in 2019 and claims to have spent some ZAR9.5-million on advertising the brand, argues that it has built up considerable goodwill, holding a 22% share of the sparkling rosé market in South Africa.

KWV claimed that the "packaging architecture" of the Lady Lillian product is clearly similar to that of the Annabelle Cuvee Rosé product. The alleged similarities are:

The lawyers acting for Du Toitskloof argued that white-sleeved bottles are common in the trade and that they are used to lure female shoppers - Valdo (Prosecco) is said to have started this trend in 2019. They argued that no one company can claim exclusivity in respect of the colour white in packaging.

The lawyers also claimed that the use of female names is common practice in the industry, pointing out that KWV's Annabelle is itself close to a Klein Constantia wine called Cuveé Anabel Rosé, which is packed in a white box with florals. 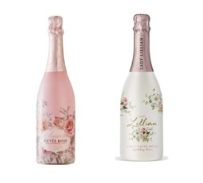 The ARB noted the similarities made the point that various aspects of packaging, which on their own might be considered unprotectable, may be protectable in combination.

"The Directorate thinks it highly likely that the consumer will either buy the Lady Lillian thinking that it is the Annabelle, or thinking that the two wines have emerged from the same stable. This is not the case."

The ARB ordered Du Toitskloof to stop selling the Lady Lillian product in the get-up described above by mid-November 2022.

Some words on price and the likely consumer/target market

The ARB made some comments about price and the likely consumer. Here's one:

"It is also true that the wine connoisseurs or wine enthusiasts are not likely to be confused by the product.however this is a sweet sparkling wine that retails at around R90, with an emphasis on the look and feel. It is likely to appeal to someone who casually drinks wine and is not into the whole 'wine estate' aesthetic and branding. there is a high likelihood that this target market are likely to be confused into thinking that the products are related in some way, or similar."

"The target market for sweet sparkling wine at the R90 price point does not enjoy the same levels of brand literacy as, perhaps, the market for imported champagnes. This market is buying based on the 'pretty' aesthetic, and is likely to regard these bottles as being very similar."

It is a well-established rule that the likely consumer is a factor that can and should be considered when determining the likelihood of confusion between two brands. It's also obvious that some buyers will be more knowledgeable and discerning than others. But the use of phrases like "brand literacy" and a "pretty aesthetic" may raise some eyebrows!

This ruling is a another reminder of how the ARB can sometimes be used for resolving what are essentially trade mark disputes.

ARTICLE TAGS
South Africa Consumer Protection Consumer Law Intellectual Property Trademark Media, Telecoms, IT, Entertainment Advertising, Marketing & Branding
POPULAR ARTICLES ON: Media, Telecoms, IT, Entertainment from South Africa
Coasts: Legal Regulatory Issues In Advertising In Nigeria
LeLaw Barristers & Solicitors
Advertising in Nigeria is regulated by a combination of federal laws, state laws, subsidiary legislation and guidelines.
What To Watch Out For Before Signing An Influencer Agreement
Olisa Agbakoba Legal (OAL)
An Influencer Agreement is a contract in which a party is contracted to market or promote the products or services of a particular brand through social media.
General Principles And Requirements For Advertising In Nigeria
S.P.A. Ajibade & Co.
Advertising is a vital marketing tool utilized by businesses to promote their products and services.
Introduction To Licensing In The Nigerian Telecommunications Industry (Part 1)
S.P.A. Ajibade & Co.
The Nigerian telecommunications industry is one of the fastest growing and most regulated industries in Nigeria. Following the liberalisation of the previous monopolistic ...
‘For The Good Of The Game': Commercial, Legal, & Regulatory Issues In Nigerian Football
LeLaw Barristers & Solicitors
This can also spawn a specialist sector of lawyers.
"It's Better Than Yours!"
SchoemanLaw Inc.
Whether it be as a result of ideological changes in consumers, the Covid-19 pandemic, or political strife, the South African goods and services market has had to endure some significant shifts in recent years.
FREE News Alerts
Sign Up for our free News Alerts - All the latest articles on your chosen topics condensed into a free bi-weekly email.
Register For News Alerts
Article Tags
South Africa Consumer Protection Consumer Law Intellectual Property Trademark
Media, Telecoms, IT, Entertainment Advertising, Marketing & Branding
More Tags
Related Articles
African Women On The Move: In Conversation With Social Media Marketer Songhai Advisory LLP
Notice Of Unauthorised Download Incident Adams & Adams
Regulator Sanctions Influencers Over Lotto Adverts – Comedians Do Not Get The Last Laugh After Failing To Disclose That Twitter Posts Were Paid Advertising Adams & Adams
TikTok's Preferential Moderation System Sets A Dangerous Legal Precedent Barnard Inc.
Parody In South Africa: Addressing The Hippo In The Room Adams & Adams
Mondaq Webinars
The New Swiss Data Protection Act - What You Need To Know
FABIAN PRIVACY LEGAL GmbH
Navigating the AI Legal Landscape
INQ Law
More Webinars
Comparative Guides
Dominance
Labour and Employment
Private Equity
More Guides
Mondaq Advice Centres
Global
Trademarks in SAARC Countries
More MACs
Upcoming Events
Mondaq Social Media