Russia has been in discussions with the Governments of Israel, India, Iran, and Singapore about the possibility of establishing Joint Venture Free Trade Zones in their respective countries. These would allow both domestic and Russian companies to partner together and allow both export of manufactured and multi-component manufactured products to be exported back to Russia and the markets of the CIS and Eurasian Economic Union (EAEU), as well as onto the respective domestic markets.

Russia has already established such zones successfully in Egypt, where the Port Said Industrial Zone near the Suez Canal has seen a wealth of Russian investments matching Russian market requirements with cheaper Egyptian labour. Similar zones are already operational in Serbia and Vietnam, while Russia has also been discussing the establishment of such zones with numerous other countries in Africa and Asia. The map below explains. 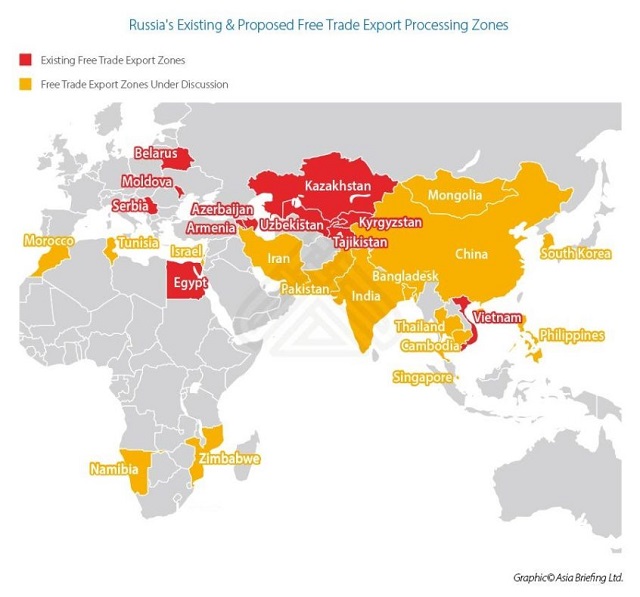 Russia signed off a Free Trade Agreement with Singapore via the EAEU last year, while a similar agreement with Vietnam is now in its fourth year, with significant trade volumes increases as a result.  Serbia also has a Russian FTZ and joined the EAEU at the end of 2019.

India has been looking atsuitable sites for such zones, and is also mulling an FTA with the EAEU.

Global supply chains are expected to develop beyond China and the United States post Covid-19 as businesses look to diversify risk of both pandemics and trade war disputes.