Russia has been quietly developing access to new emerging markets in Africa and Asia, and while Russia is a far smaller player than China in terms of influencing global trade flows – with the exception of energy resources – like China, it has a need for some of its manufacturers to develop new export markets in the wake of sanctions.

Similar to Chinese initiatives, Russia has been investing in Economic Zones to service Russian businesses in Africa and Asia. These include Egypt, where a large facility is being built at Port Said and negotiations are underway for a similar investment in Morocco, while the Russian Foreign Minister has recently declared interest for Russian zones to be established in Mozambique and Namibia.

Russia's multilateral trade with Africa as a continent has been growing at rates of 17% per annum and is now about US$20 billion a year. That can be expected to further increase, and Russia has been putting in the diplomatic and trade efforts to ensure this happens. Russia currently has preferential Double Tax Agreements with Algeria, Botswana, Egypt, Mali, Morocco, Namibia and South Africa. The latter is a member of the BRICS grouping along with Russia, China, India and Brazil, and is a 20% shareholder along with Russia of the BRICS New Development Bank.

Also of note is Africa's African Continental Free Trade Agreement (AfCFTA) which dispenses with tariffs on 90% on all intra-African products. Only Nigeria remains outside the FTA. This move has significant benefits for Russian businesses trading and manufacturing in Africa as they can now source cross-border throughout much of the continent.

The AfCFTA deal reduces tariffs – to be phased in over a five year period among some members – to zero on about 90% of all intra-African traded goods, thereby essentially demolishing cross-border trade barriers. That, coupled with the still-developing DTA network that Russia has built up in Africa over the past decade is set to provide a huge boost to Africa-Russia trade, with some estimates suggesting it will rise by a further 25% in the next 12 months. That will spur further infrastructure development and increase Russia's role in Africa exponentially.

In terms of Asia, the Indian government has been keen to secure Russian investments in Economic Zones in India, while elsewhere in Asia, Russia's approach is rather different to China.

Russia is part of the Eurasian Economic Union (EAEU), a Free Trade Bloc that also includes Armenia, Belarus, Kazakhstan and Kyrgyzstan. As a geographical land mass, that sits between China and the European Union. Russia has successfully negotiated Free Trade Agreements in Asia with both Vietnam and Singapore, with Russian trucks set to be manufactured in Da Nang under this agreement. Meanwhile, numerous other Asian and African countries are currently in discussions with Moscow over following suit. We can examine the current situation as regards Free Trade between the EAEU, Africa and Asia as follows. It appears likely given what is happening in Africa and Russia that Russia will also establish such zones elsewhere in Asia over coming years. 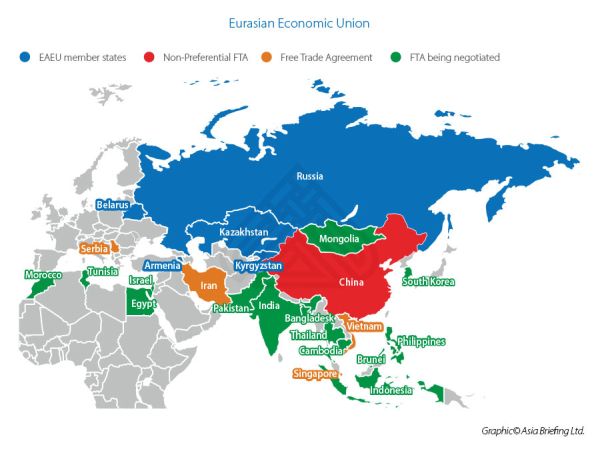