Lights, camera, action! The history of filmmaking stretches back over a century, and in that time, the technologies in front of and behind the lens have advanced in leaps and bounds. Just as it takes more than a script and a wad of cash to make a film, inventing a whole new industry needs a lot of Intellectual Property (IP) to go with it.

Several critical phases of innovation, each involving one or more inventors, ensured that moviemaking evolved from a curiosity into multi-billion-dollar mainstream entertainment. Though not every idea was a winner, it is no surprise that patent protection has played a significant role in this artform's evolution and quirks.

The Lumières, Méliès and Edison: camera and film pioneers

Auguste and Louis Lumière are sometimes credited with developing the first "moving pictures" system, debuting their cinématographe in 1895 at the Salon Indien du Grand Café in Paris. Even so, the Lumières' screening of "Workers Leaving the Lumière Factory" followed exhibitions not only of Thomas Edison's Kinetoscope viewer (1893) and Kinetograph moving camera (1894) but also a film-viewing system invented and patented by Léon Bouly also called a cinématographe. However, because Bouly did not maintain his patent or trademark the term, the brothers could use, modify and profit from the IP.

The Lumière system was quickly adopted by Georges Méliès, a former stage magician who became one of the first great filmmakers. His place in movie history stems not least from ingenious in-camera effects and film editing, which allowed him to create sci-fi and fantasy films with extraordinary imagery, including "The Haunted Castle" and "A Trip to the Moon." All the same, Méliès erred by not patenting his methods and spent much of his life in dire financial straits. Yet, despite this lapse, virtually all modern sci-fi cinema carries traces of Méliès' influence and his whimsical, oft-imitated imagery.

Although various sound recording tools are listed among the 1,093 patents Thomas Edison held individually or in collaboration, he did not ultimately produce the technologies that made films with synchronized sound ("talkies") a reality. Some who vie for that honor include:

Warner Brothers, a relatively small studio at the time, took a gamble on short-term gains from the novel and perhaps fleeting trend of synchronized soundtracks with the first feature-length talkie, "The Jazz Singer," in 1927. The film was a smash hit, and Warner Brothers rushed headlong to produce follow-up productions that would capitalize on this success. A success that did not go unnoticed by other industry players. 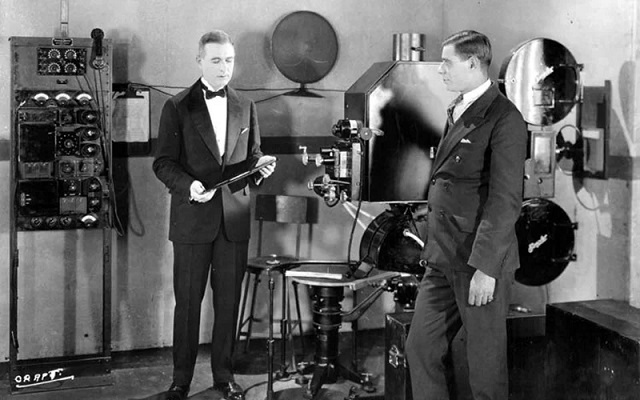 Initially, "Vitaphone" was the audio system of choice for Warner Brothers. It remained in operation until 1931 when a sound-on-film system gradually replaced it. (Image source: Wikimedia Commons)

Soon, competing sound-recording formats were the subjects of heated patent disputes in the U.S. courts. William Fox, the founder of what would eventually become 20th Century Fox, bought up the patents to the German sound-on-film system, Tri-Ergon, and used those patents to aggressively sue Warner Brothers, MGM, and other movie studios that were using competing technologies. In relatively short order, sound-on-film systems such as Movietone became the industry standard because audio and visual elements could be recorded simultaneously onto the same medium, ensuring synchronized playback.

The birth of the modern movie studio

In the early days of cinema, theaters were owned by film production companies, resulting in distribution monopolies: Universal films could only be seen in Universal theaters, and so on. All that changed in 1948 when the U.S. Supreme Court handed down a decision in United States v. Paramount Pictures, Inc. that profoundly affected the film industry. The court ruled that the big Hollywood studios could no longer block independent theaters from showing their movies. This decision led to the rise of independent movie producers and the demise of the studio system. It also paved the way for television to become a major force in entertainment and for independent cinemas to experiment with resourceful – and sometimes foolhardy – experience-enhancing gimmicks.

The AromaRama process, developed by Charles Weiss, was intended to "make the movies smell" by employing a technology that vented over 100 aromas into the theater through ceiling vents. "Behind the Great Wall," a Far-East travelogue directed by Carlo Lizzani, was thought to be fairly ingenious at the time, hitting its public with "odors of grass, earth, exploding firecrackers, a river, incense, burning torches, horses, restaurants, the scent of a trapped tiger and many more." The idea was to arouse all the senses to create a more "immersive" encounter. Smell-O-Vision, a similar concept patented by Hans Laube, was featured in the 1960 film "Scent of Mystery." Unfortunately, the public has consistently turned up their noses at the idea of fragrant films, and such forays tend to be box-office stinkers.

Another movie gimmick, Illusion-O, was created by William Castle to scare people into loving his films. The new technology, which accompanied 1960's "13 Ghosts," was a "ghost viewer" that allowed members of the audience to see (or not see) the ghosts on screen by employing blue and red filters. One of Castle's other inventions, Percepto, was used for the 1959 cult classic "The Tingler." Percepto used electric buzzers hidden under a number of seats to send shivers up the spine of various moviegoers during key scenes. In theory, the shocked screams of these excited viewers would inspire equal terror in all the audience. You probably know the feeling if you have ever left your phone in your back pocket. 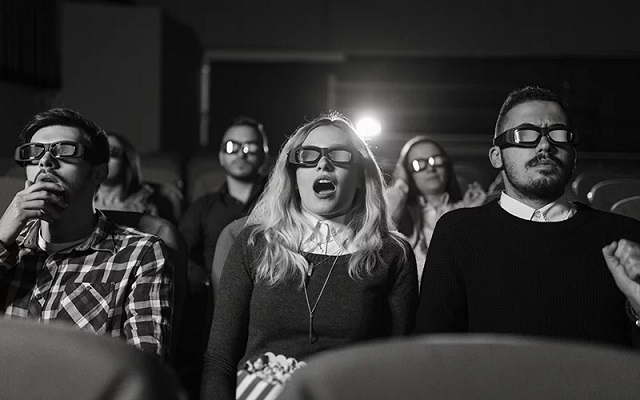 Independent movie theaters and distributors were eager to try out new technologies that could give them an edge over their bigger competitors, not limited to dangling a plastic skeleton over the audience at select moments.

Garrett Brown spent his young adulthood in the 1960s trying to be everything from a folksinger to a copywriter. But it was his struggles with cumbersome mounts and dollies as a camera operator and commercial television producer that led him to one of filmmaking's breakthrough inventions. In 1974, Brown filed to patent the Steadicam (originally called "Brown's Stabilizer") - a device that uses spring-loaded arms and handles to allow camera operators to shoot smooth footage while moving about freely. The Steadicam has been used in such classics as "The Shining" (1980) and "Rocky" (1976), for which Brown won an Academy Award. The device even appeared in front of the camera in James Cameron's 1986 sci-fi-action sequel "Aliens" in the guise of a futuristic "Smartgun."

Brown's other notable inventions include the Skycam, a wire-guided camera system that flies overhead and is often used during football games, and the Mobycam, an underwater camera system used to capture footage of marine life.

In 1977, George Lucas released "Star Wars," a film that transformed the way effects-driven pictures were made. "Star Wars" was the first movie to use motion control photography, a special effects technique that allowed filmmakers to create realistic images of objects in motion. Lucas' company, Industrial Light & Magic (ILM), pioneered the use of this technology, which has since become an industry standard. ILM has continued to push the boundaries of special effects with its work on such blockbusters as "Jurassic Park" (1993) and "Avatar" (2009).

When Oscar-winning effects expert Lawrence Butler created a blue traveling matte backdrop for the fantasy film "The Thief of Baghdad" (1940), he unknowingly sparked a revolution. The blue made it easy for the crew to stage remarkable visual effects for the time: flying carpets, a massive genie, landscapes of ancient Iraq and more. 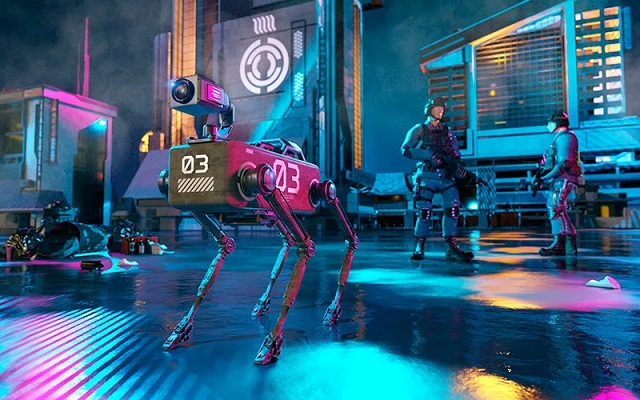 Digital recording technology and internet streaming have significantly reduced some of the costs associated with filmmaking. No longer are expensive, fragile celluloid film and complicated practical stunts required to deliver a blockbuster experience to audiences.

We know this chroma key process better as "blue screen" or "green screen." Butler's successors improved it considerably: Wadsworth Pohl patented the sodium vapor process that made actors' presence in background footage look more natural. Petro Vlahos developed color-composition methods, motion-control cameras and other tools that let directors envision increasingly fantastic worlds. The first "Star Wars," for one, would not be the way it is without Vlahos' work.

In the late 20th century, digital technology burst onto the big screen. Computer-generated imagery (CGI) was used for the first time in the 1982 film "Tron." This and other early examples of CGI were very rough around the edges by today's standards, but they paved the way for more sophisticated effects. With the release of James Cameron's culture-defining "Terminator 2: Judgment Day" in 1991, the cinemagoing public was awed by what a combination of old and new special-effect technologies could achieve. Today, digital technology is used in almost every aspect of moviemaking, from pre- to post-production, perhaps overly so – to the detriment of older crafts.

Each of these inventions has helped make movies more accessible and enjoyable for audiences worldwide. Along the way, patents have protected the technical and creative genius behind these marvels of expression in a dog-eat-dog industry.