"Net zero emissions" is a buzz word and a challenge every country is facing. In our newsletter of December 2020, we introduced an excerpt of the joint article by IAC and EPO, "EPO-IEA study: rapid rise in battery innovation playing key role in clean energy transition". As of 2021, Japan has set up a goal of zero net emissions by 2050. The use of renewable energy and electric vehicles is indispensable for realizing a carbon-free society, and the development of rechargeable battery technology is getting more attention. This article focuses on and analyzes four types of next-generation rechargeable batteries (which use materials other than lithium): potassium-ion batteries, sodium-ion batteries, magnesium batteries and calcium-ion batteries, with regard to their patent applications to the JPO.

The following graph shows the 20 companies filing the largest number of applications related to the aforementioned four types of batteries. It shows that each company tends to file applications across multiple types, despite many of them focusing on one type. 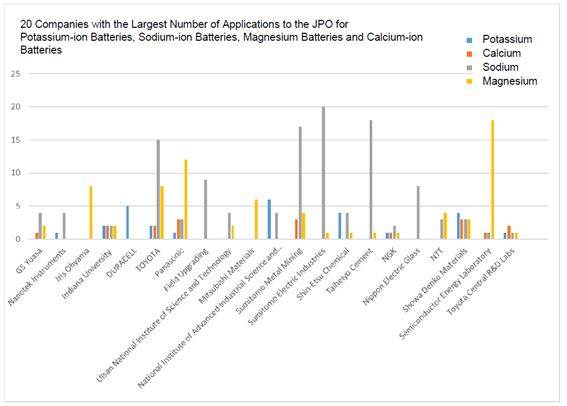 Subject: patent publications and unexamined patent applications filed at the JPO from 2016 to 2020

Many Japanese companies have ranked on the list. Meanwhile, the overall list, including companies outside the above ranking, has the following ratios based on the number of cases:

We have extracted the title of the Invention: Lithium* Battery" x each applicant name for patent publication and unexamined patent applications filed at the JPO from 2016-2020.

Next, we have analyzed the number of applications and applicants by type of batteries.

Toyota, which filed many applications in all four of these categories, shows a very positive attitude toward the R&D and manufacturing of batteries. Toyota established Prime Planet Energy & Solutions, which is a joint venture company with Panasonic, on April 1, 2020. The company engages in the R&D, manufacturing and sales of square-type lithium-ion batteries for hybrid and electric vehicles (EVs), as well as the R&D and manufacturing of all-solid-state batteries and other next generation batteries for automotive use.

The EPO-IAE report mentioned that Japan and Korea are leading in the R&D of batteries describing that "The study also shows that Japan and South Korea have established a strong lead in battery technology globally.", and our analysis of applications to the JPO proves that Japanese companies accounted for the top applicants. In addition, it is also acknowledged that Japan has 41% of the inventors involved in global patent applications from 2014 to 2018, and that Japan already led the world in battery innovation in the 2000s, with the gap between Japan and other countries widening further in the past decade. Although it can be expected that the number of Japanese companies would be relatively high since the analysis in this article is based on applications to the JPO, the fact that nine of the top ten companies are Japanese can represent that Japanese companies are aggressively engaged in the R&D and patenting of next generation batteries.

ARTICLE TAGS
Japan Corporate/Commercial Law Corporate and Company Law Intellectual Property Patent
POPULAR ARTICLES ON: Intellectual Property from Japan
Patent Law in India
Anand & Anand
The Patents Act 1970, along with the Patents Rules 1972, came into force on 20th April 1972, replacing the Indian Patents and Designs Act 1911. The Patents Act was largely based on the recommendations of the Ayyangar Committee Report headed by Justice N. Rajagopala Ayyangar. One of the recommendations was the allowance of only process patents with regard to inventions relating to drugs, medicines, food and chemicals.
Assignment And Licensing Of Copyright
Singh & Associates
Copyright is a protection given to the creators of certain types of works as an acknowledgment to their intellectual input
New Aussie Domain Name
Davies Collison Cave
A new Australian domain name, .au will be available from 24 March 2022. Australian individuals, businesses, and organisations will be able to register their existing and new domain names in the .au domain name space...
Patent Specification - Where The Rubber Meets The Road
Singh & Associates
In order to obtain a patent, an applicant must fully and particularly describe the invention therein claimed in a complete specification.
Compulsory Licensing In India
Khurana and Khurana
WIPO defines patent as an exclusive right granted for an invention, which is a product or a process that provides, in general, a new way of doing something, or offers a new technical solution to a problem
What Can Be Patented In India?
Intepat IP Services Pvt Ltd
Sections 3 and 4 of the Indian Patents Act, 1970 specifically state exclusions to what can be patented in India.
FREE News Alerts
Sign Up for our free News Alerts - All the latest articles on your chosen topics condensed into a free bi-weekly email.
Register For News Alerts
Article Tags
Japan Corporate/Commercial Law Corporate and Company Law Intellectual Property Patent
Related Articles
国家知識産権局、「知的財産権信用管理規定」で意見募集 Kangxin
Patents Comparative Guide Shiga International Patent Office
Trademarks Comparative Guide SONODA & KOBAYASHI INTELLECTUAL PROPERTY LAW
IP News Bulletin, May 2021 SONODA & KOBAYASHI INTELLECTUAL PROPERTY LAW
Analysis Of Patent Filing Trends On Self-Driving Technologies And MaaS-related Technologies Shiga International Patent Office
Mondaq Webinars
What Can Be Achieved in Luxembourg in Terms of Securing Assets in Pre-Trial, Pre-Enforcement Situations?
Bonn Steichen & Partners
Webinar Luxembourg Luxembourg
Hot Topics in Fund Finance [REPLAY]
Cadwalader, Wickersham & Taft LLP
Webinar New York United States
More Webinars
Comparative Guides
Artificial Intelligence
Cybersecurity
Data Privacy
Labour and Employment
Mergers & Acquisitions
More Guides
Mondaq Advice Centres
Global
Trademarks in SAARC Countries
More MACs