Nigeria has earned itself the title of Africa's bitcoin nation. An unstable Naira contributes to the popularity of the cryptocurrency. But Nigeria's central bank remains critical of bitcoin.

Bitcoin, the leading cryptocurrency, has seen its value balloon by more than 100% year-to-date, soaring to an all-time high of more than USD 60,000.  Nigerians, many of whom are battling poverty, would be hard-pressed to miss out on those gains. This is especially true considering that the unemployment rate in the most populous African nation was 33.3% as of last quarter, with more than 23 million  Nigerians out of work.

Enter bitcoin, which has been a safe-haven investment as well as a faster and cheaper payment method for the growing segment of the population that is catching on. In fact, Nigeria last year rose to the top of the heap for bitcoin trading at USD 400 million in volume, surpassing transactional volume in nearly every other jurisdiction - with the exception of the United States and Russia - as traditional asset classes lose their appeal in comparison and the local currency, the naira, remains under pressure. Nearly one-third of Nigerians who participated in a Statista poll  said that they used or owned cryptocurrencies, more than any other country represented in the survey. 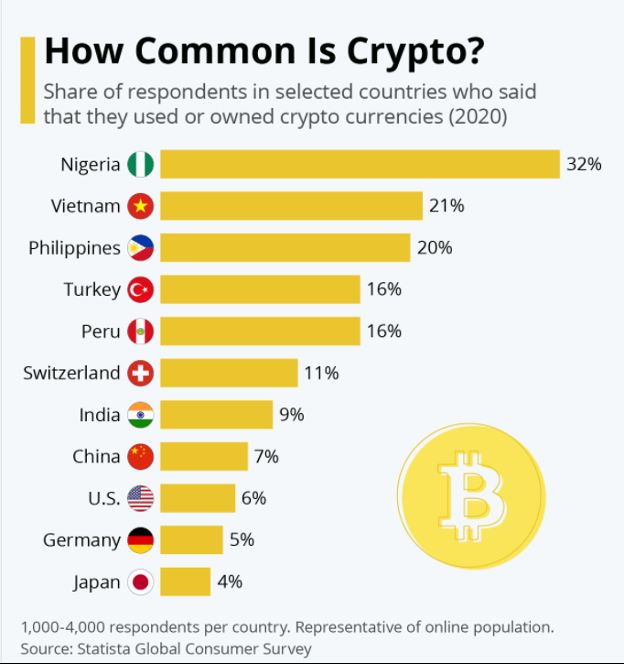 Nigeria also stands out in all of Africa, as the top peer-to-peer bitcoin trading nation on the continent based on bitcoin trading volume. Nigeria's P2P BTC trading volume surpassed USD 99 million in the first quarter of 2021. Kenya is a distant second at USD 34.8 million followed by Ghana and South Africa at USD 27.4 million and USD 25.8 million, respectively.

The robust bitcoin trading activity in Nigeria has earned the country the title of Africa's Bitcoin Nation. A 27-year-old Nigerian office worker who was spotlighted by the AFP,  Chigoziri Okeke, described how he first invested in cryptocurrencies five years ago with the intention of just making a payment. When his crypto wallet's value increased by 10% in a few short days, however, he was hooked and started directing a percentage of his salary toward the market. Today, this investor's crypto portfolio is worth USD 50,000, comprising various digital assets.

In addition, Google searches of bitcoin in Nigeria surpass that of any other jurisdiction, according to Nairametrics.com. Bitcoin appeals especially to the West African nation's millennial generation, who are looking to the flagship cryptocurrency as a store-of-value asset as well as a way to circumvent the hoops they must jump through to open a traditional investment account.  With the bitcoin price most recently hovering at USD 60,000, Nigerians have reason to be excited. At this price, one bitcoin could reportedly buy someone a three-bedroom apartment in Lagos' Ajah neighborhood.

A big part of bitcoin's popularity is due to Nigeria's unstable naira. The International Monetary Fund (IMF) has drawn a line in the sand, stating that Nigeria's fiat currency is "overvalued" by more than 18%. The IMF wants Nigeria to devalue its fiat currency, but the African nation's government has said no way.

Nigerian President Muhammadu Buhari blames "global outflows" triggered by COVID-19 for the unstable naira and believes that devaluing it further after doing so twice in 2020 would only exacerbate the already sky-high inflation rate, which is currently in the double-digits at more than 17%. This would weaken Nigerians' purchasing power even more. Nigeria's central bank slashed the naira's value by close to one-quarter last year.

Meanwhile, not only has bitcoin been generating returns hand over fist, but it has also been thrust into the global spotlight amid the SARS-related protests in Nigeria. According to reports, Nigeria thwarted financial payments toward police brutality protests, which only led the supporters to donate bitcoin instead. Twitter and Square CEO Jack Dorsey backed this movement, which only brought more attention to the country and cryptocurrencies.

Nigeria's central bank has been highly critical of bitcoin, warning as recently as February that "cryptocurrencies are largely speculative, anonymous and untraceable."

Nonetheless, the Central Bank of Nigeria can't stop the population from accessing the flagship cryptocurrency, thanks to the peer-to-peer nature of bitcoin, which was inherently designed to circumvent third-party service providers like banks. Bitcoin creator Satoshi Nakamoto, whose real identity remains a mystery, defined the first cryptocurrency in the whitepaper, which was published in 2008, saying:

"A purely peer-to-peer version of electronic cash would allow online payments to be sent directly from one party to another without going through a financial institution."

The Central Bank of Nigeria has since backtracked from its remarks slightly, maintaining that it has not placed a blanket ban on cryptocurrency trading. It is a tangled web, however. The central bank instead said that it is doubling down on a 2017 law that bans institutions supporting cryptocurrency transactions.

Financial institutions that don't follow the rule will be the target of "regulatory sanctions" by the central bank. Any users, whether individuals or organizations, will see their accounts shuttered if they continue to perform crypto transactions. Local fintech companies that have supported cryptocurrency transactions, including Flutterwave, Buycoin, and PiggyVest, have reportedly informed their customers about the policy changes, in response to which users have been withdrawing their crypto funds in droves.

Even though institutions might be banned from supporting cryptocurrency trading, individuals are still free to trade them. The central bank is sending mixed signals, to say the least, as local banks were instructed by the central bank to refrain from doing business with customers who transact in cryptocurrencies.

"The CBN did not place restrictions from use of.cryptocurrencies and we are not discouraging people from trading in it. What we have just done was to prohibit transactions on cryptocurrencies in the banking sector," stated Adamu Lamtek, according to Decrypt, citing Today NG.

Since the restrictions were imposed on Nigeria's crypto trading industry, rather than disappearing, the industry has flexed its muscle for its nimble nature. In a few short months, they have been quick to build P2P exchanges that circumvent the crypto ban on financial institutions. The restrictions have funneled more activity to over-the-counter (OTC) venues while a makeshift P2P market is similarly expanding. Danny Oyekan, founder of global social payments application Coins App, is cited by Decrypt as saying,

"So basically, the ban only forced the fiat channels underground."

In Nigeria, cryptocurrencies are regulated by the country's own Securities and Exchange Commission, which last year stated that it would classify cryptocurrencies as securities unless they are proven otherwise by the asset's issuer or sponsor. In February, Nigeria's SEC said that crypto regulation was going to be placed on the back-burner amid the central bank's crypto crackdown. Despite the uncertainty, Nigerians are showing no signs of relenting in their pursuit to own bitcoin and are increasingly relying on P2P trading platforms to do just that.

While it is unclear what the Central Bank of Nigeria's policy on bitcoin will look like exactly, one could look to other African nations to get a sense of the landscape. Morocco, for instance, has banned cryptocurrencies, but somehow bitcoin is still considered popular there, based on skyrocketing BTC transactions. In the meantime, policymakers in the North African nation are exploring the benefits of a central-bank digital currency (CBDC).

Kenya, meanwhile, is a hotbed for cryptocurrency transactions as regulators look to strike a balance between supporting innovation and protecting investors. Ghana, meanwhile, has taken a stance similar to Nigeria and has urged its population to refrain from trading cryptocurrencies.

This post is guest authored by Gerelyn Terzo of Sharemoney.

Reach out to us at contact@ikigailaw.com. We would love to have a chat.