Mexico: Energy Reform – Chapter II: Income By The State From Activities Of Exploration And Extraction Of Hydrocarbons (Upstream)

The State shall receive income from activities in connection with the Exploration and Extraction of Hydrocarbons, including general concepts: (i) fees and (ii) taxes, and (iii) specific: Sign-in bonus, contractual fee, Royalties, specific Considerations set forth in the Contracts, and state Dividend by PEMEX and its EPS.

We believe a classification that provides a practical understanding of such income has been proposed by Carlos Giuliani Fonrouge1 within the scope of Financial Law, which classifies income in tax-based and non-tax-based, depending on the legal tax income of their origin or source.

The regime of tax-based and non-tax-based income for activities in connection with the Exploration and Extraction of Hydrocarbons is established mainly by the LISH, the LPEMEX, and their corresponding regulations. 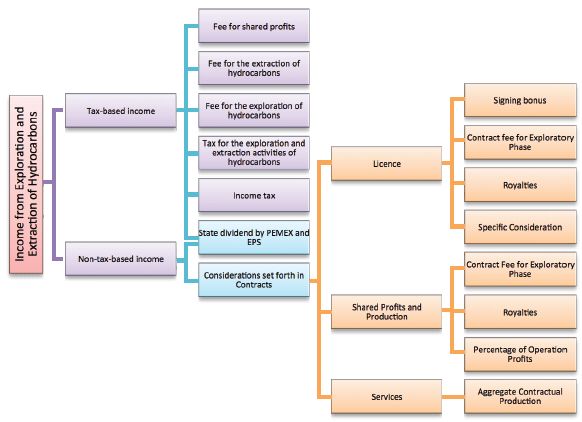 Contributions on energy matter arising from activities related to Exploration and Extraction of Hydrocarbons.

The following five are contributions on energy matters arising from activities related to Hydrocarbons:

Let us be reminded that the only subject that can act as Assignees2 are PEMEX or any other EPE that is holder of an Assignment and operator of an Assignment Area; understanding as Assignment the administrative act by which the Federal Executive grants the right to carry on with Exploration and Extraction activities of Hydrocarbons in the Assignment Area, exclusively to an Assignee, for a given duration.

Taxes for Exploration and Extraction activities of Hydrocarbons are a contribution set forth for Contractors and Assignees, that are also regulated in the LISH; while Income Tax caused by Contractors and Assignees for income arising in connection with their Exploration and Extraction activities shall be caused and determined pursuant to the rules set forth in the LISR, with certain specific rules for their determination set forth in the LISH.

All of the above-mentioned tax-based income, with the exception of the Income Tax, shall be received by the Mexican Fund for Stabilization of Oil and for Development and is exempt from concentration rules contained in the Law on Federal Income.

Let us be reminded that concentration rules contained mainly in Article 12 of the LIF, essentially refer that income collected by agencies of the Federal Public Administration or their de-concentrated administrative bodies for the different concepts set forth in the LIF itself, shall concentrate in the Federal Treasury on the business day following that of their reception and shall, whichever their nature, be reflected both in the records of the Treasury itself, as in the Account of the Federal Public Treasury.

a) Subjects and Purpose.- The subjects that shall pay the Fee for shared profits are the Assignees, that is, PEMEX or any other EPE that holds an Assignment and is operator of an Assignment Area.

In case SENER authorizes migration of an Assignment to Contracts for Exploration and Extraction, PEMEX or the EPE that acted as Assignee, shall immediately forfeit its quality as subject that shall pay the Fee for shared profits, since such migration implies the extinction of the administrative act of the Assignment giving rise to the applicable legal-tax regime for Contracts for Exploration and/or Extraction.

This same scenario occurs with the rest of the contributions (tax-based income) that an Assignee has obligation to pay.

This Fee has the purpose of taxing the extraction of Hydrocarbons made by Assignees during the corresponding tax year.

b) Grounds.- The grounds for this Fee is the (positive) difference between the value of Hydrocarbons extracted in the corresponding year (including their consumption by the Assignee, as well as any waste for spillages or burn of said products) and permitted deductions.

Article 40 of the LISH provides the Fee for extraction of Hydrocarbons actually paid, costs and expenses, the original amount of certain investments as items subject to being deducted from the value of Hydrocarbons extracted in the term, with the following relevant provisions:

(i) Extraction fee for Hydrocarbons actually paid during the corresponding term.

For the purpose of determining the grounds for this Fee, costs and expenses are the disbursements required for the extraction from the Oil or Natural Gas fields determined in accordance with the Mexican Financial Information Provisions, in the understanding that the only costs and expenses that can be deducted are those of the Exploitation, transportation and delivery of Hydrocarbons.

An exception is set forth for those investments which original amount is also subject to being deducted, which are not considered costs and expenses; this is consistent and avoids duplicity in the deduction.

The rule regarding the time of deduction of costs and expenses is the same set forth for Income Tax purposes, in which these items shall be deducted when they have been effectively paid in the term for which payment is made.

Assignees have a formal obligation to keep record of Exploration and Extraction costs and expenses for each Hydrocarbon's Extraction field, as well as the specific types of Hydrocarbons obtained, which shall be sent regularly to the Lower Chamber (Cámara de Diputados) and the Tax Administration Service (SAT, for its initials in Spanish, Servicio de Administración Tributaria). Such record shall be integrated in accordance with the general rules that are issued for such purpose.

Rule 10.3 of the Miscellaneous Tax Resolution 2015 (RMF 2015, for its initials in Spanish, Resolución Miscelánea Fiscal) provides that Assignees shall submit to SAT information included in the cost and expenses record of exploration and extraction of each Hydrocarbons' extraction field, as well as the type of Hydrocarbons obtained, no later than on February 15 of each year.

The original amount of the following investments may be deducted:

The LISH provides that the original amounts of investments mentioned in items "b" and "c" shall be adjusted pursuant to the ad hoc provisions of the Income Tax, which implies that Assignees must update such original amounts in accordance with the rules set forth for such purpose in Article 31 of the LISR.

It is questionable that the LISH limits or shortens the determination of the original amount of such investments so drastically, because such restrictions imply a determination of a concept that does not match with the economic reality to obtain them.

2 This, consistent with the Administrative Law principle under which entities of public order may hold Assignments inasmuch as private entities of concessions.