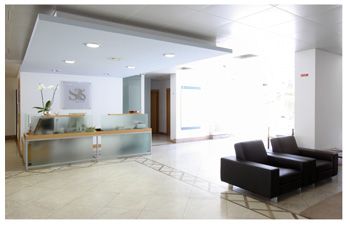 Cross-border M&A is driving growth at SRS Advogados; with a view to building on this success, the firm opened a Singapore office to encourage more Asian investment in Portugal

SRS Advogados is benefiting from what head of finance William Smithson describes as a "feelgood factor" in Portugal. "The market is buoyant, the economy is doing well, there's a feeling of optimism and the country is perceived as a strong option for foreign direct investment," he says. "Portugal's economic stability is making the country increasingly attractive for investors."
There is also a sense of well-being at SRS at the moment. Recent work for the firm has included advising Laboratory Corporation of America (LabCorp) on the Portuguese law aspects of its $1.2 billion takeover of contract research organisation Chiltern International. The firm describes the last year as its "best yet" – though the firm has not disclosed its revenue, a source says it increased by 10 to 15 per cent in the last year.
Cross-border M&A has been a key driver of growth at the firm, according to Smithson. "With regard to M&A, we're advising high-net-worth individuals, private equity funds and family offices – foreign direct investment is coming in," he adds. "Tourism, hotels and leisure is also growing, while there are also good returns for investors in the commercial real estate market." Smithson says there is considerable interest in Portuguese assets among pension funds, particularly those from the UK and Germany. "There is also a lot of investment in technology in Portugal, particularly companies from the US and Israel – we've done many technology deals in the last couple of years," he adds. In one such deal, SRS recently advised Portuguese venture capital fund Pathena on its €1.3 million investment in Primetag, a technology startup specialised in online influence marketing. In addition, Smithson says there is a lot of investment in fintech, medtech and security-related technology companies in Portugal. 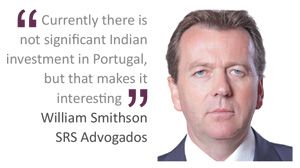 Brexit benefits
Uncertainty related to Brexit is working to Portugal's advantage, according to Smithson. "Lisbon is now an option in the context of Brexit," he argues. "For start-ups, the top locations are London, Berlin and Lisbon – such companies have to ask themselves whether they want to be in London as it is unclear what Brexit will actually mean, and Portugal is an attractive option, not only for its great quality of life, but also it's good infrastructure, competitive services, great penetration of English and sophisticated and innovative human resources."
SRS no longer has the international network it had when it was part of Simmons & Simmons, but in January 2017, SRS opened an office in Singapore. This move has provided further evidence of how the UK's loss could be Portugal's gain when it comes to the repercussions of Brexit. "Through our Singapore office we're talking to significant players from the region – traditionally, they would have gone to the UK, but now Portugal is very attractive to them," says Smithson. "There are investors from Asia who say they have no visibility in Portugal, so part of what we do is creating awareness of opportunities here," he adds. The benefits of having an office in Singapore is that the city serves as a "platform for the whole Asian region including Australia and India", Smithson says. Indeed, SRS sees potential in the Indian market. "Currently, there is not significant Indian investment in Portugal, but that's what makes it interesting as there is enormous potential," says Smithson. He adds that work for international investors is one of the biggest growth areas for the firm.
Though Smithson does not confirm details, it is understood that international clients currently contribute around 50 per cent of SRS' revenue. This is unsurprising given that, generally speaking, Portuguese law firms get paid higher fees by international clients than by those in the domestic market. Indeed, some Portuguese lawyers often lament the fact that they are among the cheapest in Europe.
What distinguishes SRS is the fact that it is more commercially focused than some of its competitors, according to Smithson. To further emphasize the firm's credentials for being client-oriented, Smithson highlights the fact that the firm's senior partner Pedro Rebelo de Sousa was formerly a banker and has "vast international investment bank experience". Smithson continues: "In addition, in our corporate finance team, we have people who have worked in investment banks in Hong Kong, London, Madrid, New York, São Paulo and Singapore – they have worked on the other side." Smithson adds that what clients really want is simple, clear, business-focused advice.

Retaining lawyers and ensuring they perceive SRS as a law firm offering "good career opportunities, career progression and excellent training is a key challenge, according to Smithson. He argues that SRS has been particularly successful in this respect, "especially given that of the firm's 21 partners, 11 were trainees at SRS". Smithson also points out that one third of the firm's partners, and around 50 per cent of the firm's 110 lawyers, are women. "With such a large proportion of women lawyers, you have to be sensitive to that dynamic and consider issues such as working from home and childcare, for example," he explains. Smithson argues that one of the perks SRS is able to offer potential new recruits is a healthy working environment. "This is a good place to work, the work is sophisticated and innovative, the firm is not too traditional and it has a very good work-life balance." 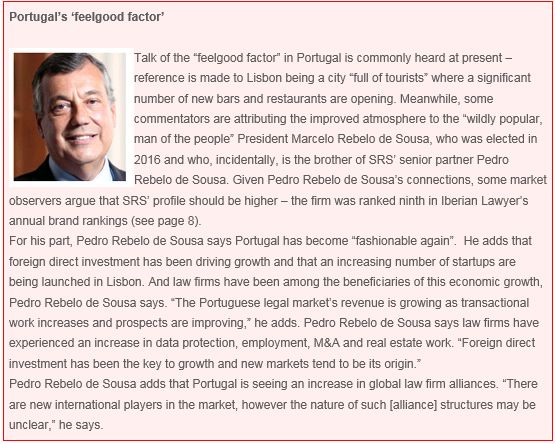 ARTICLE TAGS
Portugal Law Department Performance Management Performance
POPULAR ARTICLES ON: Law Department Performance from Portugal
How To Recruit & Retain Employees: Part 2 – D Day
Finance Malta
In this article, we will focus on the 1st interview and how you can, as an employer, structure and position it in such a way that it not only helps you identify the best match for you but also acts as a value point for potential candidates.
Autumn Lecture Series - The Association Of Lawyers For Children
Russell-Cooke Solicitors
Samantha Little is presenting to the Association of Lawyers for Children (ALC) members as part of their Autumn Series of lectures.
What Is A Power Of Attorney?
Michael Kyprianou Advocates & Legal Consultants
In our life there is sometimes a need to legally appoint another person or attorney to act on our behalf and in our name in private affairs, business or some legal matter. A Power of Attorney is the only way...
Pro Bono Matters
Arnold & Porter
National Pro Bono Week is a perfect occasion on which to pause and reflect on what pro bono work we have done over the last year, the extent to which we have been able to contribute...
The Steps To Take If You Suspect Abuse Of A Power Of Attorney
Giambrone & Partners
A Power of Attorney has more than one function, enabling another person to assume responsibility for another person's affairs when that person, known as the doner,...
FREE News Alerts
Sign Up for our free News Alerts - All the latest articles on your chosen topics condensed into a free bi-weekly email.
Register For News Alerts
Article Tags
Portugal Law Department Performance Management Performance
Related Articles
PLMJ Foundation Podcast | UMBIGO – Afropolitanos PLMJ
Law Firms Should Be Speedy, Efficient And ‘Keep It Simple' Iberian Lawyer
Chambers and Partners elege PLMJ como Client Service Law Firm of the Year em Portugal PLMJ
Lisbon Annual Report 2017: Looking Brighter Iberian Lawyer
I Complain If Something Is Amiss, Because Honest Feedback Is A Key Improvement Tool Iberian Lawyer
Mondaq Webinars
Reshaping Strategies for Wealth Management in the Post-Pandemic Economy [REPLAY]
Wedlake Bell
Webinar London UK
Hot Topics in Fund Finance [REPLAY]
Cadwalader, Wickersham & Taft LLP
Webinar New York United States
More Webinars
Comparative Guides
Banking Regulation
Corporate Tax
Cybersecurity
Data Privacy
Litigation Dispute Resolution
More Guides
Mondaq Advice Centres
Global
Trademarks in SAARC Countries
More MACs