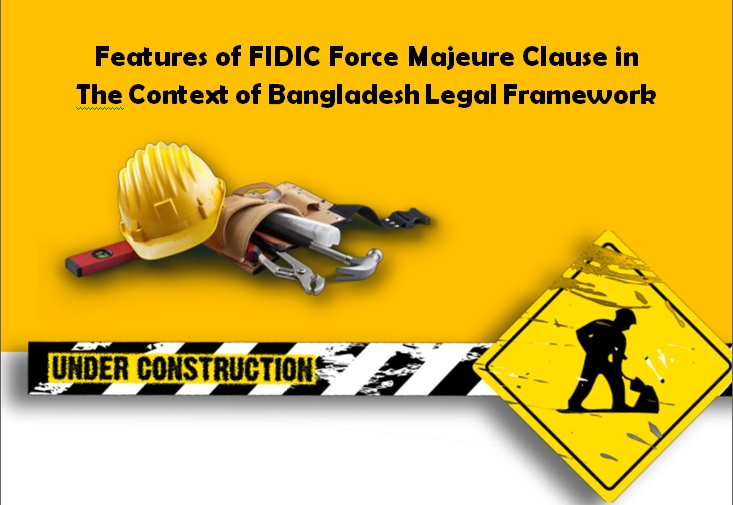 Mega construction projects all over the world nearly came to a standstill due to the Covid-19 effect and Bangladesh is no different. The large-scale mega projects like Padma Bridge, Metro Rail, Chattogram Cox's Bazar Line, Rampal Power Project etc. are bound to suffer time extension and increased costs. Although users of template contracts issued by International Federation of Consulting Engineers (FIDIC) are unlikely to face any surprising outcomes as FIDIC contracts hold unique fully fledged dispute avoidance features on a live and real time basis, however the effect on restrictions on movements mandated by the regulatory bodies cannot be avoided. This article will examine the overtly discussed force majeure conundrum particularly FIDIC clause from Bangladesh perspective.

The standard Force Majeure ("FM") events and the requirement to invoke them are incorporated in typical FIDIC contract (FIDIC Pink Book). The construction of FIDIC vis-a-vis FM clause varies from contract to contract and are being customized to fit within the legal framework of the Employer country. Generally, FIDIC FM clause has 2 (Two) critical components that are the requirements of invoke Force Majeure and a list of examples of Force Majeure events. Apart from the two components there is a separate aspect embedded in FIDIC contract called Change in laws, which, in a fit case, has the same effect of allowing the Contractor to recover costs and expenses causing from the change of laws.

As for the first component Contractor will be required to satisfy that the situation at hand is beyond its control, and could not reasonably have provided against before entering into the contract, which, having arisen, the Contractor could not reasonably have avoided or overcome; and which is not substantially attributable to either of the parties. Subject to interpretation by the judiciary of FIDIC FM clause, considering the magnitude of the effect of Covid-19 across the globe and government interventions and restrictions on movement, it is likely that the outbreak of Covid-19 and the current ongoing movement restrictions and public holidays would be declared as force majeure as that they would possibly satisfy all the criterion and are beyond the control or attributable on the Contractor. In this connection, it is to be noted that pandemics or local authorities/governmental actions are not listed in the list of force majeure examples. However, care is needed from Contractor's part to closely examine whether any part of the works can be carried out during shutdown period, for example design preparation since the requirement to mitigate losses and find alternatives is also a statutory requirement in almost all the countries (Bangladesh position discussed below).

The second component encompasses the events that may be designated as Force Majeure. The most relevant in the current circumstances is riot, commotion, disorder, strike or lockout by persons other than the Contractor's Personnel and other employees of the Contractor and Subcontractors. Subject to judicial interpretation, the terms "Disorder", "Strike" and "Lockout" is to be interpreted taking together their literal meaning and reflecting them to the current situation where government has issued restraint orders on movements. Again, it is likely that the Covid-19 lockdown condition can be treated as force majeure event, even if the word "epidemic" is not stipulated in the particular agreement. While the FM categorized in the first component may allow extension of time and the examples set in the second component would allow the Contractor to recover costs and expenses in addition to extension of time provided other notice requirements and other conditions like mitigating measures are complied with.

The other aspect is the change of law clause. In addition to the above, or independently, the current situation related to imposing restriction on movements, travel bans, declaring public holidays, etc. is likely to be construed as "Changes in Laws" under the Contract. In typical FIDIC contracts the term "Laws" have been defined as all national (or state) legislation, statutes, ordinances and other laws, and regulations and by-laws of any legally constituted public authority. Also further clauses provide that change in Laws includes the introduction of new Laws and the repeal or modification of existing Laws or a change in the judicial or official governmental interpretation of such Laws, made after the Base Date (defined in the Contract), which affect the Contractor in the performance of the obligations. It is suggested that regulatory orders, by the public authorities, which have the potential of adversely impacting the livelihood, liberty and freedom of a citizen, which are his/her fundamental rights guaranteed under the Constitution of Bangladesh, should not be treated as mere administrative orders; instead, arguably such regulatory orders carry effect of law. And issuance of such regulatory orders should be considered as changes in Laws. Given that the most of the government directives are issued under respective statute, therefore, it is likely that they would be deemed as secondary legislation and effectively Changes in Laws. The legislative status of the recent directives is provided below.

It is also important to note that in interpreting the clauses and their legal effect, judges and arbitrators will be persuaded to consider the Golden Principles of FIDIC (2019), which in effect corroborates the long-established contractual principle and rules of interpretation that manifest absurdity is to be avoided in interpreting legal instruments. The following are the key Golden Principles:

In addition to the above Golden Principles, FIDIC has issued a document, among others, in April 2020 called FIDIC COVID-19 GUIDANCE MEMORANDUM TO URSERS OF FIDIC STANDARD FORMS OF WORKS CONTRACT. The memo is basically an effort to answer commonly faced queries during Covid-19 and general answers to the queries referring specific clauses of standard FIDIC contract. The reasons provided

in the said memo is likely to be considered as an external aid to interpretation as it comes from the source where the template contracts were developed.

It is important to note that FIDIC Memorandum to an extent expresses the view that the current situation is unlikely to be a FM for failing to satisfy the test that "a party could not reasonably have avoided or overcome" the event utilizing the relevant health and safety measure, irrespective of all the criterion of force majeure are satisfied. According to the prescription of the Memorandum, better way of addressing the situation is to claim Changes in Laws clause instead of FM clause as it would allow both extensions of time and recovery of unavoidable cost. Having said that in interpreting the terms, specific facts and circumstances are likely to be considered, for example measures initiated by the Contractor to find alternative ways to continue work and the same is a statutory requirement under Bangladesh legal framework (discussed below).

Article 152 of the Constitution of the People's Republic of Bangladesh explains law as "law means any Act, ordinance, order, rule, regulation, bye law, notification or other legal instrument, and any custom or usage, having the force of law in Bangladesh". Therefore, it is arguable that the regulatory orders, particularly the order issued by the Directorate General of Health Service, having reference Memo No- H.Dep./Corona/2020-34 dated 16 April 2020,  pursuant to section 11 of the Infectious Diseases (Prevention, Management and Elimination) Act 2018 (IDA 2018), imposing strict movement restrictions and banning going out of home might be considered as a change in Laws under the Contact. Moreover, it is critical to note that contravention of the regulatory order mentioned above will be subject to prosecution as offences committed under section 24 and/or section 25 of the IDA 2018, which are punishable with imprisonments up to six (6) months and fine. By virtue of S.R.O 98-Law/2020  dated March 24, 2020, issued by the Ministry of Home Affairs, these offences are also included in the Schedule of the Mobile Court Act 2009  (the "MCA 2009"), and, hence, pursuant to section 4 of the MCA 2009, these offences could be indicted and, penalty, as stipulated under section 24 and/or 25 of the IDA, as the case may be, could also be imposed instantaneously by the mobile courts for committing of such offences. Moreover, any violation of the orders could also be prosecuted for offences committed under section 269 and/or section 270 of the Penal Code 1860,  which are also punishable with imprisonments up to two (2) years or fine or both. Therefore, taking together all the statutory provisions, it is likely that the administrative orders will be interpreted as "Change in Laws".

Section 73 of the Contract Act, 1872  also suggests that compensation for any loss or damages caused to non-defaulting party is recoverable which usually arose in the course of things from such breach or which the parties knew, when they made the contract, to be likely to result from the breach of it. Compensation will not be payable for any remote and indirect loss or damages sustained by reason of the breach. The section is a general statutory requirement to mitigate losses, which will be looked into by the judges while awarding compensation. It is understandable that there is no voluntary breach of contract during

Covid-19 as the defaults are the resulting from a situation that beyond the control of the contracting parties, however, if the matter escalates to dispute resolution or even during negotiation between the parties on the quantum of compensation, the actions of the parities and compliance to laws of the country will be taken in to consideration, for example how the Contractor contained unavoidable costs like staff salary during Covid-19 period.

It should be kept in mind that any agreement to deal with the FM period have to be entered into with free consent without coercion or duress keeping in mind Golden Principles promulgated by FIDIC, because the said principles are concentrated into the Contract Act as well. Section 19 of the Contract Act provides that agreement is caused by coercion, fraud or misrepresentation is voidable. The fact of "Coercion" and "Free Consent" is to be determined from the actions of the parties. Any bargain that effectively forces the Contractor, as in majority cases Contractor being a foreign entity and hesitant to take legal route due to length procedural complexities, to pull out from the performance contract can be viewed as "Coercion" without Free Consent.

In all material time the parties are required to timely comply with all their communication obligations, such as notices and updating of records stipulated in the respective contracts. The timeframe stipulated in the relevant clause are very critical as the Contractor may not be able to recover costs and expenses, and/or be entitled to extension of time, if the notice is not served within the time limits. The notice to invoke FM should be issued at/within the timeframe agreed in the contract. Unless a template is agreed, the notice to invoke FM should contain the date and time from when Contractor compelled to suspend works/performance of obligations required under the contract along with reference of specific contract clause, clear descriptions and indication of the events that caused suspension of work/performance. The Contractor is required to inform the Employer immediately upon cessation of FM event(s).

Successful invocation of FM clause would allow the Contractor extension of time if delay is caused due to Changes in Laws provided the notice requirement prescribed by the contract has been complied with. Compensation especially loss of profit arising out of FM event will be difficult to attain. subject to compliance of notice requirements, unavoidable costs and additional payment caused FM events like lockout, changes of laws for period of FM would depend on the mitigation measures of the Contractor taken in the FM period provided Contractor initiated effective measures to mitigate loses, explored alternative to continue work during Covid-19, and the costs are directing caused by the FM event.