January 1, 2021 saw the ushering in of the Regional Comprehensive Economic Partnership (RCEP), the world's largest multilateral trade agreement. The RCEP covers 15 states, including 10 ASEAN members, China, Japan, the Republic of Korea, Australia, and New Zealand. Their combined population is about 2.3 billion people, about 30 percent of the world total, with an overall GDP of $28.5 trillion.

"The economic size of the emerging bloc and its trade dynamism will make it a center of gravity for global trade," noted the United Nations Conference on Trade and Development (UNCTAD) in a study published in mid-December. "In the current context of the pandemic, the entry into force of RCEP can also serve an additional purpose: trade resilience."

At the core of RCEP are tariff concessions, with the members due to eventually eliminate levies on more than 90 percent of goods traded within the bloc. This will particularly benefit three regional giants, China, Japan and South Korea, which are now connected by a free trade agreement for the first time. Tariffs on Japan's exports of some electric vehicle components to China, for example, will be removed, according to Japan's trade ministry. Japan is expected to be the biggest beneficiary, with overall effects on exports estimated at $20.2 billion, followed by China at $11.2 billion and South Korea at $6.7 billion. 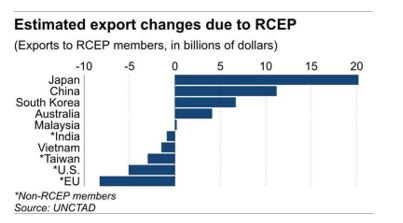 The UNCTAD study estimated that tariff concessions by RCEP participants will increase exports within the region by two percent compared with the 2019 level, or about $41.8 billion, by diverting trade away from non-member economies and spurring new trade inside the bloc.

RCEP is expected to increase regional trade flows and deepen cross-border production linkages among its 15 member economies. It should help to draw in investments, offering companies a broad array of production locations with differing comparative advantages, and the opportunity to export at preferential tariff rates to a wide economic area comprising both high-income consumers and a large and growing middle-income segment. 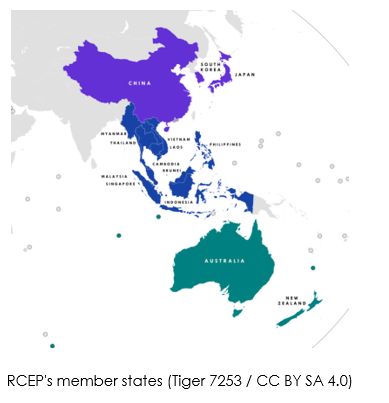 Under the agreement, more than 90 percent of merchandise trade between members will eventually be subject to zero tariffs. The tariff reductions will average a small decline of 0.7 percent by the 10th year, and 1 percent by the 20th year after the agreement comes into force. Tariff cuts differ significantly across products and economies, with a more gradual pace of reduction in Cambodia, Laos and Vietnam, allowing more time for these lower-income economies to adapt to increased competition.

The benefits extend to businesses of all sizes. With increased connectivity, cross-border e-commerce between China and Asean member states has developed rapidly, providing new impetus for regional economic development.

Output in sectors such as textiles and garments, leather, wood and paper will grow faster during the first 10 years of the agreement; while sectors such as agriculture, energy and mining, chemicals and electronics will expand at a faster pace in the longer term.

(Previously published in The Maritime Executive, reproduced by consent of the Author)