by Priya Adlakha and Shilpi Sinha
S.S. Rana & Co. Advocates
Your LinkedIn Connections
with the authors

The Hon'ble Delhi High Court in its judgement1 in the case titled as RED BULL AG vs. PEPSICO INDIA HOLDINGS PVT LTD & ANR, refused to provide protection to Red Bull's registered tagline 'VITALIZES BODY AND MIND' in a trademark infringement and passing off suit filed against Pepsico for the use of the tagline 'STIMULATES MIND. ENERGIZES BODY' for the energy drink 'Sting'.

The Plaintiff claimed that it had been manufacturing and marketing its energy drink under the trademark 'Red Bull' and had been using the tagline 'VITALIZES BODY AND MIND' since 1987. The said tagline is registered in India since 2010 with effect from 2004 in class 32, and 73 other countries around the world.

The Plaintiff claimed that the usage of the aforesaid mark has become a source identifier of the Plaintiff's products and on account of long and extensive usage, it had acquired distinctiveness in relation to its products. The Plaintiff also stated that it had spent enormous amounts on the marketing of its product in relation to the aforesaid tagline and enjoys the dominant market share in respect of energy drinks all over the world, including India.

Submissions made by the Plaintiff

Submissions made by the Defendants

The Defendants drew a comparison between the getup and layout of the cans of the products of both the parties and contended that they are totally different, therefore no action of passing off could be made out.

With regard to the claim of infringement, the Defendants contended that the exclusive right to use the mark under Section 28 of the Act, can be averred only if the registration is valid and the same is subject to other provisions of the Trade Marks Act.

Defendants filed a rectification petition against the said tagline registration of the Plaintiff, on the ground of it being in contravention of Section 9 of the Act, alleging that the tagline was completely descriptive and the Plaintiff is using the same in a descriptive matter. Therefore, registration ought not to have been granted by the Trade Marks Registry in terms of Section 9(1)(b) of the Trade Marks Act.

Defendants further averred that they are selling their drink under their registered trademark STING and the tagline was used only in a descriptive manner and no registration had been sought in respect thereof, as a trademark. Hence, there was no case of injunction made out under Section 29 of the Act.

The Defendants took the defence of Sections 30(2)(a) and 35 of the Trade Marks Act, placing reliance upon the Division Bench judgments of this Court in 'Marico Limited v. Agro Tech Foods Limited' 5 and 'Stockley Van Camp, Inc. v. Heinz India Private Limited'.6

In addition, the Defendants also submitted that the suit is hit by delay and laches as the product of the Defendant was launched in the Indian Market in October 2017, whereas the suit was only filed by the Plaintiff in August 2018, after the Defendants had established their presence in the market.

Plaintiff's Submissions in the Rejoinder

The Plaintiff contented that its tagline is not descriptive and is rather used an imaginative phrase. It also averred that as per the terms of Section 31 of the Act, the registration of a mark is prima facie evidence of its validity and prima facie registration has to be assumed to be valid. Further, Defendant's use of the tagline is not in a descriptive manner, as alleged.

Hon'ble Mr. Justice Amit Bansal of the Delhi High Court, made the following observations and held:

In regards to the case of Passing off, the Hon'ble Court stated that the basic premise for passing off, is deception caused on account of the Defendant attempting to show its goods as that of the Plaintiff. The Hon'ble Court relying on the case of Satyam Infoway Ltd. v. Siffynet Solutions (P) Ltd.7 , stated that common law remedy of passing off restrains a Defendant from riding on the reputation and goodwill earned by a Plaintiff, being the prior user/owner of a distinctive mark. The purpose of an action of passing off is to prevent confusion and deception amongst consumers and the public at large.

Comparison of Plaintiff's and Defendants' Products 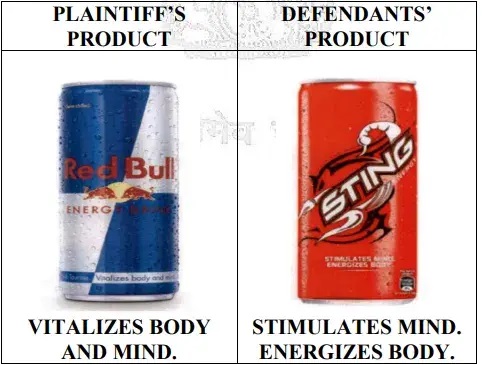 After referring to a comparison of the products being sold by both the parties, the Hon'ble Court noted that there is no similarity between the two products and that the layout of the cans is totally different, therefore, no case for passing off was made out.

The Hon'ble Court observed that the Defendants were using their tagline in a descriptive manner and not as a trademark, relying upon the principles laid down in 'Marico Limited v. Agro Tech Foods Limited' and 'Stockley Van Camp, Inc. v. Heinz India Private Limited'. The Hon'ble Court noted that while the Plaintiff's tagline had been granted registration in India in 2010, the rights granted upon registration under Section 28 of the Trade Marks Act are not absolute, and are therefore subject to other provisions of the act.

While making a reference to paragraph 10 of the plaint, the Hon'ble Court stated that it was a clear acknowledgement on behalf of the Plaintiff that the aforesaid tagline/mark had been used by the Plaintiff in a manner so as to describe the attributes or quality of its drink. The Hon'ble Court took a prima facie view that the tagline used by the Plaintiff was of a descriptive/laudatory character, which ought not to have been granted registration in view of Section 9(1)(b) of the Trade Marks Act.

While also noting that the Defendants had not sought any registration for their tagline and that the use of the said tagline was also in a descriptive/laudatory manner and not as a trademark, the Hon'ble Court was of the view that the Defendants would be entitled to protection under Section 30(2)(a) and Section 35 of the Trade Marks Act.

As for the issue pertaining to delay and laches, the Hon'ble Court observed that the Defendants had been selling their product now for a period of five years with the aforesaid impugned tagline and therefore the balance of convenience would be against the grant of interim injunction.

The said judgement is in appeal before the Division Bench of the Hon'ble Delhi High Court as is fixed for hearing on November 30, 2022.

Though the Hon'ble Court has rightly observed in this case that there was no similarity in the two conflicting taglines, however, the reasoning given behind such conclusion that the 'Plaintiff has used the aforesaid tagline in a descriptive manner since it appears as a sentence on the can of the Plaintiff's product, wherein the first word 'VITALIZES' has the alphabet 'V' in capital letters and the sentence ends with a full stop, raises a pressing concern pertaining to the protection of registered trademarks in a descriptive phrase/tagline despite the fact that it may have acquired a distinctiveness and secondary meaning, as most taglines are descriptive in nature.

ARTICLE TAGS
India Intellectual Property Trademark
POPULAR ARTICLES ON: Intellectual Property from India
A Study On: Novartis AG v. Union Of India
Khurana and Khurana
Intellectual property is an intangible form of property while a ‘Patent' is a subset of intellectual property.
Assignment And Licensing Of Copyright
S&A Law Offices
Copyright is a protection given to the creators of certain types of works as an acknowledgment to their intellectual input
Difference Between Passing Off And Infringement Of The Trade Mark
Khurana and Khurana
A Trade mark may be defined as a lawfully protected abstract, word, symbol, color, mark, slogan or a mixture of those related to an organization or a selected product that differentiates it from the others accessible within the market.
Patent Law in India
Anand & Anand
The Patents Act 1970, along with the Patents Rules 1972, came into force on 20th April 1972, replacing the Indian Patents and Designs Act 1911. The Patents Act was largely based on the recommendations of the Ayyangar Committee Report headed by Justice N. Rajagopala Ayyangar. One of the recommendations was the allowance of only process patents with regard to inventions relating to drugs, medicines, food and chemicals.
Patent Infringements And Their Types
S&A Law Offices
Patent is one of the most important forms of Intellectual Property (IP). The term of a patent is typically 20 years from the Priority date of the application.
Compulsory Licensing In India
Khurana and Khurana
WIPO defines patent as an exclusive right granted for an invention, which is a product or a process that provides, in general, a new way of doing something, or offers a new technical solution to a problem
FREE News Alerts
Sign Up for our free News Alerts - All the latest articles on your chosen topics condensed into a free bi-weekly email.
Register For News Alerts
Article Tags
India Intellectual Property Trademark
Related Articles
Enforcing A Patent Right In India L. S. Davar & Co.
CGPDTM'S Notice For Streamlining The Trade Marks Show- Cause Hearings Through Dynamic Cause List S.S. Rana & Co. Advocates
Cause Of Action And Determination Of Jurisdiction In Intellectual Property Rights Cases In India Vaish Associates Advocates
What Cannot Be Protected Under The Trade Marks Act S.S. Rana & Co. Advocates
The New Age Infringers: Delhi High Court Tackles Online Counterfeits S.S. Rana & Co. Advocates
Mondaq Webinars
The New Swiss Data Protection Act - What You Need To Know
FABIAN PRIVACY LEGAL GmbH
Global Offshore Fintech Focus on Crypto: Laws, Regulations and Trends [REPLAY]
Carey Olsen
More Webinars
Comparative Guides
Alternative Investment Funds
Artificial Intelligence
Aviation Finance
Aviation Regulation
Blockchain
More Guides
Mondaq Advice Centres
India
Trademarks
India
Arbitration, Litigation and Conciliation
India
Insolvency
Global
Trademarks in SAARC Countries
More MACs
Curated Content
Fast Tracking Through The Patent Prosecution Highway In India
Obhan & Associates
Divisional Applications And Plurality Of Invention In India
Obhan & Associates
Do Scientific Publications Exempt Patent Applications From Anticipation?: The Indian Position
Obhan & Associates
Preparing For Invention Disclosure Meetings: A Guide For Inventors
Obhan & Associates
Patenting 3d Bioprinting In India
Obhan & Associates
Upcoming Events
Managing Intellectual Property Disputes
WilmerHale
Panel Bengaluru India
Mondaq Social Media