India: Deposits Under The Companies Act, 2013

Deposits have been defined under the Companies Act, 2013 ("2013 Act") to include any receipt of money by way of deposit or loan or in any other form by a company. However deposits do not include such categories of amounts as may be prescribed in consultation with the Reserve Bank of India ("RBI"). Chapter V of the 2013 Act and the Companies (Acceptance of Deposits) Rules, 2014 as amended from time to time ("Deposits Rules") primarily cover regulations relating to deposits. The Deposits Rules provide an exhaustive definition of deposits which is exclusionary in nature and exclude certain amounts received by a company, from the ambit of deposits. It may also be noted that the Companies Act, 1956 ("1956 Act") and the Companies (Acceptance of Deposits) Rules, 1975 also defined deposits in a similar manner and excluded certain amounts which were not to be considered deposits.

The dilemma is that some of the exclusions introduced under the Deposits Rules lack clarity. At times these exclusions are contradictory to related provisions under the Deposits Rules. In this article, we have attempted to analyse some of these contradictions and examine the broad practical difficulties attached with the definition of deposits along with the framework devised for their repayment under the 2013 Act.

II. Exclusions under the 2013 Act and Deposits Rules

The amounts which do not fall within the ambit of the definition of deposits under the 2013 Act and Deposits Rules are inter alia:

One of the exclusions that necessitate discussion is set out in Rule 2(c) (ii) of the Deposits Rules which excludes from the ambit of deposits any amount received from foreign institutions, foreign governments or foreign banks, foreign corporate bodies, foreign citizens ("Foreign Bodies") subject to the provisions of Foreign Exchange Management Act, 1999 and the rules and regulations made there under ("FEMA").

FEMA prescribes that capital instruments should be issued by the company within a period of 180 (one hundred and eighty) days from receipt of inward remittance by the company, failing which the inward remittance should be refunded immediately. Failure to follow these timelines may attract penalties. In exceptional cases, refund of the amount of consideration outstanding beyond a period of 180 (one hundred and eighty) days from the date of receipt may be considered by the RBI, on the merits of the case. This is where the dichotomy lies. The Deposits Rules stipulate that an amount received towards share application money will not be considered a deposit as long as allotment against the amount is made within 60 (sixty) days of receipt of such money or the money is refunded within 15 (fifteen) days from the completion of 60 (sixty) days. The question that arises is whether the allotment should be made within the 60 (sixty) day's period prescribed under the Deposits Rules or within the 180 (one hundred and eighty) day's period prescribed under FEMA.

This anomaly has given rise to two interpretations. The 2013 Act has been enacted to govern and encompass within its domain companies incorporated in India and all matters relating thereto. FEMA provides a framework and lays down guidelines with respect to foreign investment. Hence it may be argued that the 2013 Act is a specific legislation which governs the subject of companies as opposed to FEMA which governs foreign investment and contains a general provision with respect to the issuance of securities to foreign investors. Therefore, following the principle of generalia specialibus non derogant, the provisions under FEMA which are general in nature, should yield to 2013 Act which is a specific legislation with respect to the issuance procedure. Therefore share application money will not be treated as a deposit for a period of 60 (sixty) days. Hence, securities should be issued within 60 (sixty) days from the receipt of money as opposed to 180 (one hundred and eighty) days prescribed under FEMA failing which the share application money will be treated as a deposit.

An alternative interpretation is that considering FEMA governs the framework with respect to foreign investment, foreign investors should be able to enjoy the leniency afforded under FEMA. However this interpretation seems to provide a foreign investor a superior position vis-a-vis a domestic investor. Considering the conundrum, in order to avoid having to comply with the procedure prescribed under Deposits Rules with respect to accepting deposits and therefore potentially having to comply with regulations on external commercial borrowings, allotment of shares should be made within 60 (sixty) days of receipt of the application money.

The other exclusion which prompts a discussion is set out in Rule 2(c) (ix) which excludes from the definition of Deposits the amounts raised by the issue of bonds or debentures secured by a first charge or a charge ranking pari passu with the first charge on any assets referred to in Schedule III of the 2013 Act excluding intangible assets of the company or bonds or debentures compulsorily convertible into shares of the company within 10 (ten) years1. This exclusion essentially signifies that a secured debenture, regardless of its tenure or convertibility, shall be exempt from the purview of deposits. However, an unsecured debenture shall only be exempt from the purview of deposits as long as it is compulsorily convertible within 10 (ten) years. This would mean that non-convertible unsecured debentures would be considered as deposits. However, any amount raised by issue of non-convertible and unsecured debentures listed on a stock exchange as per regulations framed by SEBI shall not be considered as deposits2. It needs to be noted here that FEMA does not prescribe any timeline for conversion of debentures. When the exclusions stated in Rule 2(c)(ii) and Rule 2(c)(ix) are read together, one needs to determine whether an unsecured debenture issued by a company to a Foreign Body which is convertible in more than 10 (ten) years, where such issuance is in conformity with FEMA, will amount to a deposit.

Further, it may be noted that Rule 2 (c) (vi) exempts from the definition of deposits any amount received by a company from another company.

Based on a bare reading of the aforementioned provisions, one may argue that since amounts received from a Foreign Body are exempt from the purview of deposits debentures issued to such Foreign Body, regardless of its secured, unsecured, convertible or unconvertible nature and regardless of the tenure shall not attract the provisions pertaining to Deposits.

If one was to subscribe to the aforementioned view, then the following would be the provisions applicable to debentures. 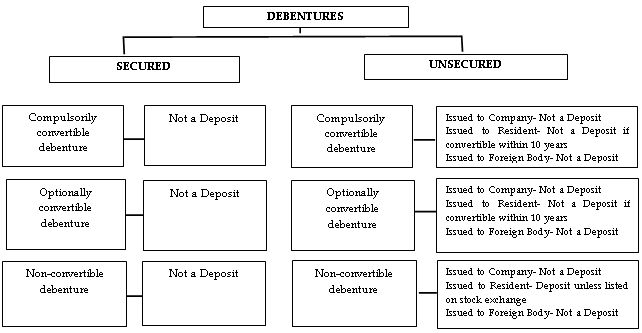 III. Exclusions under the 1956 Act

Another continuously discussed topic is whether the term 'deposits' as used and defined in the 2013 Act and the Deposits Rules meant to exclude from its scope the amounts which were not considered as deposits under the 1956 Act. Interestingly after more than a year of the provision being notified3, the Ministry of Corporate Affairs decided to put this debate to rest and issued a circular on March 30, 20154 ("Circular"). The Circular clarified that amounts not treated as deposits under the 1956 Act i.e. amounts received by private companies from their members, directors or their relatives prior to April 01, 2014, will not be treated as deposits under the 2013 Act and Rules, subject to the condition that appropriate disclosures are made in the financial statements of the company of such amounts. The Circular further clarified that any renewal or acceptance of fresh deposits on or after April 01, 2014 shall be in accordance with the 2013 Act and the Rules.

The confusion around the term 'repay' in Section 74(1) (b) of the Act is a question of interpretation of the term. A traditional interpretation would be that the sub-section stipulates the actual repayment of the amounts by a company to its lenders in cash or cash equivalents. Some may differ from such interpretation since sub-section (b) of Section 74 seems to be open ended and does not suggest that the deposits are necessarily required to be repaid only in cash or cash equivalents.

Hence one may ask whether the sub-section necessitates actual payment of deposits by a company to its lenders in cash or cash equivalents; or does it include a scenario where the repayment can be done in any other manner as well, which may even include issuance of securities to the lenders against the deposits accepted (the issuance being in accordance with the other provisions of the Act).

One may subscribe to a view that since Section 74(1) (b) does not precisely require a company to repay the 'amount' of deposit, it need not be read to mean the actual payment of the amount of deposit in cash or cash equivalent. It can be asserted that the term 'repay' in this context has been used to suggest extinguishment of liability and not actual payment of the amount of deposit. Using this interpretation if a company, upon receiving instructions from its lender, repays the deposit in the manner required by the lender, such repayment of the deposits will satisfy the requirement of Section 74(1) (b) of the Act. It would be appropriate if such instruction by a lender be accompanied with a statement or an acknowledgment that such application would amount to repayment of the deposit.

On the other hand it may be argued to the contrary that Section 74, when read in its entirety, contemplates the actual payment of the amounts of deposits by a company and does not merely suggest extinguishment of liability in any manner. The basis to substantiate this view is that the other sub-sections of Section 74 use the phrase 'amount of deposits' rather than 'deposits', which seem to suggest that payment of such deposits should be done in cash or cash equivalent and not in any other manner.

For now, the chapter relating to deposits including its definition remains open to discussion and interpretation. The recent amendments to the Deposits Rule by way of the Companies (Acceptance of Deposits) Amendment Rules, 2016 have refused to deal with the issues discussed above and have provided no guidance vis-a-vis the ambiguous provisions. It is surprising that the legislature, while specifically touching upon the definition of deposits, has refused to deal with the intersecting provisions with respect to the same. The proposed Companies Bill 2016 also appears to be silent on the topic.

What remains to be seen is the view the courts will take while interpreting the relevant provisions. These judicial decisions will go a long way in removing ambiguity and providing the necessary clarity. Considering the ambiguity on the issue of what constitutes a deposit, a clarification could be sought by the stakeholders from the Ministry of Corporate Affairs. One can only hope that the next set of amendments to the 2013 Act and Deposits Rules lifts the fog of uncertainty and provides long overdue clarity.

1. Amended from 5 to 10 years vide the Companies (Acceptance of Deposits) Amendment Rules, 2016