With a view to provide an internationally competitive environment for exports, the Government of India announced the SEZ Policy in April, 2000. The objectives of the SEZ Policy include making available goods and services free of taxes and duties supported by integrated infrastructure for export production, expeditious and single window approval mechanism and a package of incentives to attract foreign and domestic investments for promoting export-led growth.

SEZs in India functioned from November 1, 2000 to February 9, 2006 under the provisions of the Exim Policy/ Foreign Trade Policy and fiscal incentives were made available through the provisions of relevant statutes. This system did not lend enough confidence for investors to commit substantial investment for development of infrastructure and for setting up of the Units for export of goods and services.

In order to give a long-term and stable policy framework with minimum regulatory regime and to provide expeditious and single window clearance mechanism in line with international best business practices, a Central Act for Special Economic Zones was, therefore, found to be necessary.

The Special Economic Zones Act, 2005 ("SEZ Act") was enacted by the Government in 2005. Subsequently, the Special Economic Zones Rules, 2006 ("SEZ Rules") were notified on February 10, 2006, from which date, the SEZ Act comes into operation. The SEZ Policy provides for simplified procedures and single window clearance mechanism to deal with matters under Central/ State enactments. For SEZ developers, different minimum land requirement for different class of SEZs. Every SEZ is divided into a processing area, within which only the SEZ units would come up, and the non-processing area where the supporting infrastructure is to be created.

Minimum investment or Net-worth of the Promoters, all group companies and flagship companies should be as under:

Setting up of SEZ - Flow chart 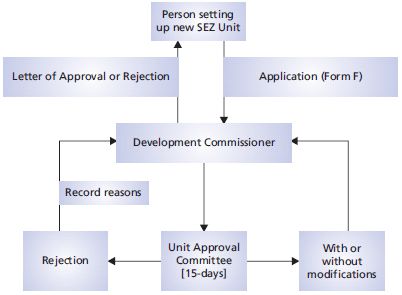 The SEZ scheme has generated tremendous response from the investors, both in India and abroad. The SEZ scheme generated domestic and foreign investment to the tune of INR 2,36,716 Crore (as of March 31, 2013):

Further, the exports from SEZs have also shown robust growth year after year. The value of physical exports during last three years is as under:

The above facts and statistics endorse the success story of Indian SEZs. In the time to come, the SEZs are going to be biggest growth drivers of Indian economy.

The Government is aware that SEZs hold tremendous potential to promote export from India. Presently, 577 formal approvals have been granted for setting up of SEZs, out of which 389 SEZs stand notified and 170 SEZs have become operational. Over INR 2.36 lakh crore have been invested in the Indian SEZs and direct employment of over one million persons has been generated in the SEZs. During the financial year 2012-13, total exports to the tune of INR 4.76 lakh crore have been made from the SEZs, registering a growth of about 31% over the exports for the year 2011-12.

Recently the Government has introduced various measures to give a fillip to SEZ policy reforms. On April 18, 2013, the Commerce Minister while releasing the Annual Supplement 2013-14 to the Foreign Trade Policy 2009-14 made various policy announcements to revive investors' interest in the SEZs. Subsequently, vide notification dated August 12, 2013, SEZ (Amendment) Rules, 2013 have been notified by the Government, thereby implementing the said policy announcements.

The following table provides an analysis of the amendments introduced by SEZ (Amendment) Rules, 2013, effective from August 12, 2013.

Q. What is a Special Economic Zone?

A. Special Economic Zone (SEZ) is a specifically delineated duty free enclave considered to be a deemed foreign territory [within India] for the purposes of trade operations, duties and tariffs. SEZ, thus, is a geographical region where the fiscal and economic laws are more liberal as compared to the business undertakings in the Domestic Tariff Area (DTA).

The entire SEZ area is divided into Processing and Non-processing area.

A. SEZ may be set-up either by the Central Government, State Government, or any person or combination thereof.

Q. For what purpose, a SEZ may be setup? What are the various formats of SEZs?

A. SEZ can be established for manufacture of goods or rendering services or for both or as a Free Trade and Warehousing Zone.

The following formats of SEZs are envisaged under the SEZ Act, 2005:

Q. Can a foreign company or a non-resident set up SEZ in India?

A. Yes, a foreign company or a non-resident can set up SEZ in India.

Q. How can foreign companies set up branch offices/ units in SEZ?

Part-II: Setting up of SEZ

Q. How can one apply for setting up of SEZs?

A. Application to be made to the concerned State Government or to the Board of Approval (the 'Board' or the 'BoA') in Form–A prescribed under the SEZ Rules, 2006 indicating therein name and address of the applicant, status of the promoter along with the project report covering the following particulars:

Further, a duly filled and signed Checklist (in prescribed format) is required to be submitted along with the Application Form.

For indicative procedure of setting up of SEZ, please refer flow chart on page 4.

Q. What are the obligations of the State Government on receipt of proposals for setting up of SEZ?

A. The State Government shall forward proposals received, along with its comments on the following to the BoA to the effect that –

Note: It is however advisable to check before hand, availability of single window mechanism in the State in question.

Q. What are the stages involved in the approval process?

A. The proposal incorporating the commitments of the State Government will be considered by the BoA. Thereupon, the approval is granted to the Developer.

There are three stages of approval mechanism, namely –

Upon receipt of the above information, the Government shall notify the SEZ by way of issue of a Notification to that effect.

Part-III: Setting up of unit in a SEZ

A. Any person, who intends to set-up a Unit in a Special Economic Zone, may submit a proposal to the jurisdictional Development Commissioner in Form 'F' as provided under the SEZ Rules.

For indicative procedure of setting up of SEZ unit, please refer flow chart on page 4.

Q. What is the approval mechanism for the units?

A. All approvals to be given by the Unit Approval Committee headed by the Development Commissioner.

Q. What are the obligations of the unit under the Scheme?

A. SEZ units have to achieve positive net foreign exchange earning as per the formula given in rule 53 of SEZ Rules, 2006. Broadly, the F.O.B. value of exports has to be more than the C.I.F. value of imports over the period of 5- years.

A. Yes, inter-unit sale is permitted under the SEZ Act.

Part-IV: Incentives and benefits available to SEZ Developers and Units

Q. What are the incentives/ benefits available to SEZ Developer/ Co- Developer?

A. The major incentives and benefits available to SEZ Developer/ Co- Developer include:

Q. What are the incentives/ benefits available to SEZ Units?

A. The major incentives and benefits available to SEZ Units include:

Q. What are the facilities for Domestic suppliers to SEZ?

A. Supplies from DTA to SEZ to be treated as physical export and the DTA supplier would be entitled to:

1. Many State Governments have extended exemption from Value Added Tax (VAT). However, for the exact position with reference to any specific State, please refer corresponding exemption notification under respective State VAT Act.

2. Many State Governments have extended exemption from stamp duty. However, for the exact position with reference to any specific State, please refer respective State Stamp Act.