by Shubham Borkar
Khurana and Khurana
Your LinkedIn Connections
with the authors
To print this article, all you need is to be registered or login on Mondaq.com.

A Committee under the chairmanship of Mr. Injeti Srinivas formed by the Ministry of the Company Affairs ("MCA") gave their recommendations to relook the offences under the Companies Act, 2013 ("Act"). Consequently ,The Ministry of Law and Justice had came out with an Ordinance dated 2nd November, 2018, further amending 31 provisions of the Act. Ordinance will cease to operate on 21st January, 2019. Since the Bill to make amendments to the Companies Act, 2013, is pending in the Rajya Sabha, the ordinance has been re-promulgated.Hence,the Government of India has re-promulgated an ordinance to amend the companies law to further improve the ease of doing business as well as ensure better compliance levels.

SOME OF THE MAJOR AMENDMENTS AND IMPACT ON THE CORPORATE SECTOR

CHANGES IN THE PENAL PROVISIONS

The changes that have been brought in the penal provisions have been consolidated in the following table for ready reference:

As per the Current ordinance the following 16 out of 81 Compoundable Offences shall now be liable to penalty instead of being punishable with imprisonment. 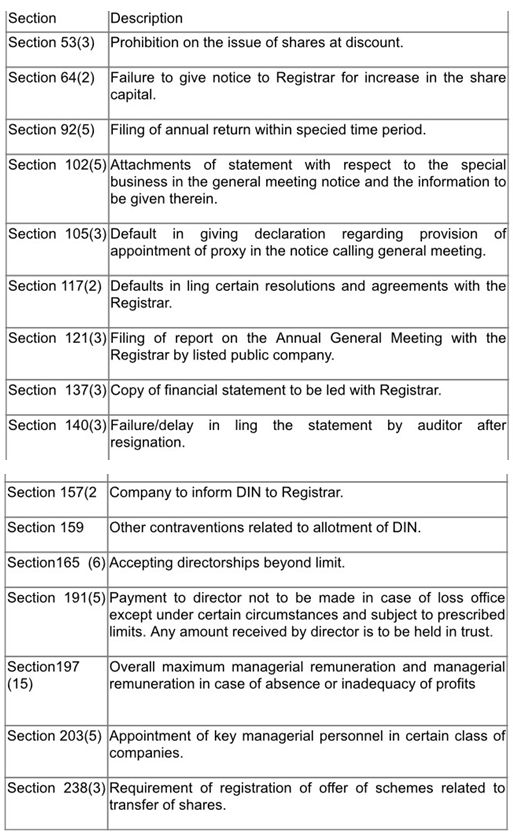 ARTICLE TAGS
India Corporate/Commercial Law Compliance Corporate and Company Law
POPULAR ARTICLES ON: Corporate/Commercial Law from India
The Limited Liability Partnership (Amendment) Act, 2021
Lumiere Law Partners
The Amendment Act was passed in the Rajya Sabha on 04 August 2021 and in the Lok Sabha on 09 August 2021.
Some Recent Trends In Oppression & Mismanagement Cases Under The Companies Act, 2013
Factum Law
The provisions regulating oppression and mismanagement in companies are an integral part of corporate governance. They ensure that interests of a company are protected and that no shareholder or...
Clean Slate Principle Re-Affirmed By The Hon'ble Supreme Court, ‘Inter Alia'
K Law
The Hon'ble Supreme Court, in its recent landmark judgment of Ghanashyam Mishra & Sons Pvt Ltd vs. Edelweiss Asset Reconstruction Company Limited, has settled the legal position on various issues arising under ...
Exclusive Jurisdiction Clause In Contracts
Upscale Legal
The law relating to ‘Contracts' in India is dealt under the Indian Contract Act, 1872. The Contracts/ Agreements can be with respect to an individual working at an organization...
Intricacies Involving Termination Of A Contract Without Adhering With The Due Procedure
Singh & Associates
Termination of contract is considered to be lawful when a legitimate reason exists to end the contract before performance has been completed.
Governance Of AIFs: In Contrast With Corporate Governance
Nishith Desai Associates
Alternative Investment Funds are primarily instituted as private trusts in India, even though the Securities and Exchange Board of India allows an AIF to be instituted as a company, a limited liability partnership, …
FREE News Alerts
Sign Up for our free News Alerts - All the latest articles on your chosen topics condensed into a free bi-weekly email.
Register For News Alerts
Article Tags
India Corporate/Commercial Law Compliance Corporate and Company Law
Related Articles
Disclosure Of An Indian Issuer's Potential FCPA Violations: The Implications For Other Indian Companies IndusLaw
Clean Slate Principle Re-Affirmed By The Hon'ble Supreme Court, ‘Inter Alia' K Law
Private Placement Of Debt Securities - An Analysis In Terms Of The Proposed SEBI (Issue And Listing Of Non-Convertible Securities) Regulations, 2021 K Law
Note Of Caution To The NCLT And NCLAT Regarding Interference With A Party's Contractual Right To Terminate A Contract Juris Corp
Basic Considerations For Buyers In An M&A Deal BTG Legal
Mondaq Webinars
Investigations and eDisclosure: Drive Down Costs by Understanding Key Data Points Early
OpenText UK Limited
Webinar Berkshire UK
Future Series: Oh Canada! Key Legal Issues for International Companies
Borden Ladner Gervais LLP
Webinar Toronto Canada
More Webinars
Comparative Guides
Alternative Investment Funds
Artificial Intelligence
Aviation Finance
Aviation Regulation
Blockchain
More Guides
Mondaq Advice Centres
India
Trademarks
India
Arbitration, Litigation and Conciliation
India
Insolvency
Global
Trademarks in SAARC Countries
More MACs