The Defendants sought leave to appeal on the basis of questions with regard, inter alia, to the duty (if any) of a trustee to supervise or review the investment decision making of an investment advisor appointed by the underlying company where the terms of the trust contain the traditional anti-Bartlett clauses. The HKCFA was satisfied that leave to appeal should be granted to the Defendants.

In light of the upcoming hearing of the appeal at the HKCFA, this article will summarise the HKCA judgment in the DBS Bank case and discuss its practicality from a trustee's perspective.

The structure of the trust is illustrated as follows: 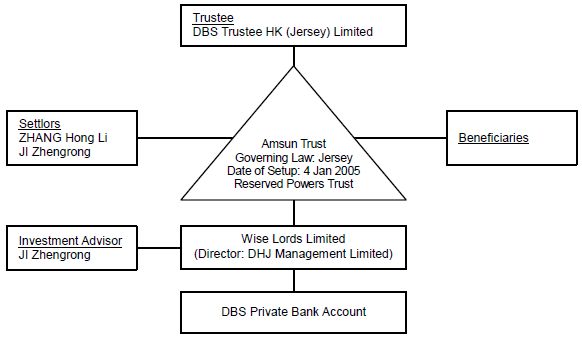 WLL achieved impressive investment returns in the years ending March 2006, 2007 and 2008 respectively. However, during the global financial crisis in late 2008, WLL suffered substantial losses in its investments. This triggered the Settlors to take out proceedings to recover losses to the assets of the Trust, namely the reduction in value of the assets held in the account of WLL.

The HKCA upheld the findings of the trial judge that the DBS Trustee had a 'high level supervisory' role over the investments made by WLL. In this respect, the HKCA accepted the views of the Jersey law expert, Professor Paul Matthews, who opined that DBS Trustee had a 'residual obligation' that the anti-Bartlett clauses in the trust deed by which the Trust was established did not exclude. These clauses are commonly included in trust instruments to circumscribe any duty of a trustee to intervene in relation to the affairs of companies in which it holds shares (following the decision in Bartlett v Barclays Bank [1980] Ch. 515).

Professor Matthews was of the view that even though the DBS Trustee had no obligation to intervene in the business of the underlying company under the anti-Bartlett clauses, it had a power to do so as a shareholder of the company. He further observed that 'if circumstances were to arise where no reasonable trustee could lawfully refrain from exercising those powers, a failure to do so in such a case would amount to a breach of trust'.

In its judgment, the HKCA also held that the DBS Trustee had a responsibility to ensure that the trust fund was 'subject to appropriate controls, reviews, investment expertise and management and that therefore in discharge of its 'high level supervisory' duty, the DBS Trustee should have exercised its power to override Ji's decisions or reverse the transactions that had been entered into by WLL. It was on this basis that the HKCA upheld the trial judge's decision to find the DBS Trustee in breach of the 'high level supervisory' duty that it had assumed.

Reserved powers trusts (RPTs) are popular with settlors and trustees because in most RPT structures, the settlor reserves the power of investments to himself. This can fulfil the desire of the settlor to retain a degree of control over the trust on the one hand, and the desire of the trustee to reduce its investment risk exposure on the other hand.

In practice, trustees of RPTs often rely on directions from settlors as the investment advisors and procure the immediate underlying holding company to make investment decisions as directed. Following the HKCA judgment in the DBS Bank case (subject to the final decision of the HKCFA), a prudent trustee may need to make inquiries regarding investments even if it is directed by the settlor as the investment advisor to make such investments. A trustee assuming a 'high level supervisory' role may have to ensure that it has sufficient information to make an informed decision either to approve the investments, or to intervene as appropriate.

It is also noteworthy in the DBS Bank case that the DBS Trustee sought to rely on the indemnity clauses contained in the 'letters of recommendation' signed by Ji as the investment advisor. The HKCA however held that these letters were neither related to the impugned investments nor given in consideration for DBS Trustee's approval of the investments. It follows from the HKCA judgment (subject to the final decision of the HKCFA) that letters of direction to be signed by the settlor should relate to the transactions in question, since a blanket indemnity may not be sufficient to relieve trustees of their duties.

As the HKCFA in the DBS Bank case has granted leave to the Defendants to appeal against the HKCA decision, the appeal hearing is expected to take place shortly. The appeal will provide an opportunity for the highest court in Hong Kong to revisit the duty of trustees and the effectiveness of the traditional anti-Bartlett clauses commonly found in trust instruments.